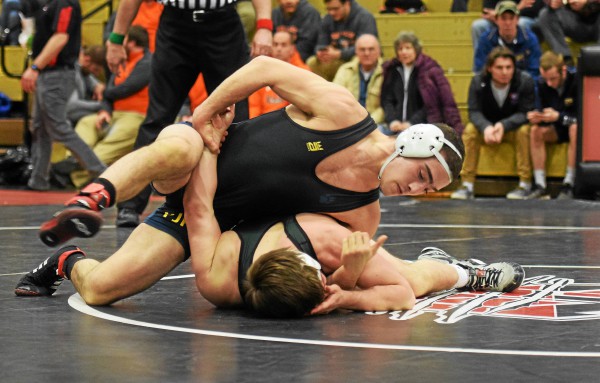 Outlook: Miller, a defending District 1-AAA Central champion at 182, qualified for states after finishing second in the Southeast AAA Regional. … Mortimer was another state qualifier last year, finishing fifth at the regional … Breidor (145), Sonder (285) and Maldonado all medalled at districts, Breidor and Maldonado coming away with thirds and Sonder a fifth. … “We’re looking to make noise with a steady, consistent lineup in the PAC, District 1 and the state,” Jones said. “But, more than that, we want to have fun.”

Outlook: The Blazers’ roster is bolstered by the presence of freshman J.T. Hogan (152), as well as transfers Stehman (Boyertown) and Foley (Reading). … Spitko is back after dealing with cancer his freshman year. …“There is excitement about the upcoming season,” Hogan said. “Our numbers for junior and senior high are up from previous years. We are looking forward to having Spitko back in the lineup at 106. 120 is another exciting weight class as we have C. Dolla returning and Boyertown transfer Chase Stehman both looking to add strength to the lineup. Sam Zummo is looking to turn the corner this year at 126. At 138 we have the addition of freshman J.T. Hogan ready to step up and make an immediate impact for the team. Another individual ready to make some noise in the lineup is Reading transfer Quinn Foley at 160. I am looking forward to seeing what the season brings for this group of wrestlers.”

Outlook: Hoffman, a standout wrestler at the Hill in his day, takes over the program from former coach Mark Pearson. Pearson retired from the post after a recent nine-year stint heading the program. … Several of the Blues’ newcomers boast solid mat pedigrees. Simpson was third in New York Prep States two years ago and fifth in Section XI (Long Island Public Schools) last season; Beckett, who comes from Souderton, was the No. 15 overall top prospect in Pennsylvania entering high school (per Pa. Power Wrestling); and Craig was a Maine state champion and third at New Englands last season. “The focus will be individuals,” Hoffman said. “I only have one dual meet scheduled (vs. Westtown Dec. 5) outside of our required MAPL Duals and (inaugural) PAISAA Duals. I expect us to have a few kids that will place high at all of our events, making us a solid tournament team.”

Outlook: Moser (21-10), Ellis (29-12) and McNair (35-6) finished a respective third, fourth and fifth in their weight classes at the 2018 Southeast AAA Regional Tournament. McNair was both a PAC and district tournament champion while Ellis and Moser were runners-up in both tourneys. … Carmona (22-17) and Rebert (21-19) placed third and fourth in the District 1-AAA Central competition off similar finishes at PACs. … “We are led by a strong core of seniors, followed by a tough junior class,” Clark said. “We are looking to compete with the top teams in the PAC, district and region.”

Outlook: Semon (30-9), who placed third in the PAC Tournament and fourth at District 1-AAA Central in 2018, will miss the start of the season while on the mend with a broken hand. … Wallace (14-10) was third at PACs last year, and Tucker fifth. … Harner comes into the season five victories away from the 150 mark for his scholastic coaching career. “With a very limited number of experienced wrestlers,” Harner said, “the team will struggle against PAC competition.”

Outlook: Mancini, a two-time state tournament qualifier the past two years, will be looking to improve on the fourth-place medal he scored at 152 this past winter. … Petrucelli will be shooting to reach the medal stand at states, as well as become the area’s latest 100-win competitor. … Meredith (75-32) is also within reach of the 100-win fraternity. … Quinn, in his second season with OJR after having wrestled previously at Malvern Prep, will have a state medal and 100 wins on his to-do list this season. … “We are excited about the upcoming season,” DeRafelo said. “We have been working hard to prepare to compete to the best of our ability. We have a number of kids who made great strides in the offseason. We will be looking to our seniors to provide the leadership needed to continue to grow. We still have a lot of work to do if we hope to be competitive in the PAC, the best wrestling league in District One.”

Outlook: Kakos (25-9) qualified for the 2018 Southeast AAA Regional tournament after winning a bronze medal at 113 at District 1-AAA Central. … Kershaw and Rowley were medalists in PACs, Kershey fourth and Rowley fifth. … “We are carrying a large team with varying amounts of experience,” Dubbs said. “We look to have a strong season and be competitive within the PAC. We have some returning wrestlers that can do very well and hope to wind up in Hershey this year.”

Outlook: Valenteen went 29-7 and wrestled at 106 his freshman season, placing fourth in the PAC tournament and fifth at District 1-AAA Central. … Washington, 25-8 at 160 last season, was fifth in PACs and sixth at districts. … Clark’s goal for the coming year: “We’re looking to have the first winning season since 2000.”

Outlook: Ryan Vulakh was the PAC’s highest-finishing medalist at the PIAA Championships in March. The George Mason commit placed third at 145 to cap a junior campaign that saw him go 31-5 and win PAC, District 1-AAA Central and Southeast AAA Regional championships. … Matt Vulakh also medalled at states, placing eighth at 106 in the course of a 30-8 season. … Files (25-9) was a regional qualifier after scoring silver medals at PACs and District 1-AAA East. … Hontz stands seven victories away from the 300 mark for his scholastic coaching career. … “This is going to be a tale of two seasons. The tournament season and the dual match season,” Hontz said. “We may have, at most, 10 wrestlers on the roster, but at least three of them could be state medalists. These are the guys we should be able to rely on. So we will only have our five league matches, but several quality tournaments like Beast of the East, Powerade and another tourney in Maryland.”

Outlook: The Falcons’ roster is bolstered by the presence of freshmen Matt Bechtel (126), Shane Caffrey (160), Alex Delger (160), Dalton Hendershot (120), Michael Kruger (106), Ricky Seltzer (170) and Brian Stevens (145). … Hanna (20-13) won a fifth-place medal at District 1-AAA Central. Keen and Miller were other district-tournament qualifiers for Pottsgrove. … Hennelly (20-13), Sithens (21-10), Van Horn (16-13) and Frye all medalled in the PAC tourney. … Madden comes into the season five victories away from the 100-win mark for his scholastic coaching career. 83 of them were from his previous 10 seasons heading the Falcon mat program, the others from two years at Wissahickon.

Outlook: Griffin medalled at the PAC Championships last winter, qualifying for the District 1-AAA Central Tournament in the process. … “We have a younger team, with only one returning senior,” Wade said. “We look to fill out our lineup and prepare to battle the improving teams in our division. We look to rely on our senior leadership and the upperclassmen with varsity experience to show our new additions what it takes to compete.”

Outlook: Smith, McGill (both fourth) and Reynolds (sixth) were all medalists at the 2018 Southeast AAA Regional Tournament. Tobin and Needles also qualified for the tourney. … Nugent and Carbajal were District 1-AAA Central qualifiers. … Milano’s conference-championship finish at 160 — one of three individual titles the Rams had alongside Smith and 2018 graduate Brandon Meredith — helped Spring-Ford emerge as the PAC’s team champion. … “The team has been working hard in the practice room,” Seislove said. “The Pioneer Athletic Conference is always tough, we are hoping to be competitive again this year.

Outlook: The Indians’ roster includes such prospects as juniors Daulton Dunlap (182), Connor Harpel (160) and Nick Petolicchio (285); sophomore Robbie Carpenter (106); and freshmen Ryan Cleary (285), Damon Faraco (195), Asher Hailey (113), Johnathan Hanson (120), Matt Milkowich (106) and Nathan Reinart (120). … Marks, Martin and Rozanski all medalled at districts last year. … “UP does not have any seniors on the roster this season,” Adam noted. “However, there is plenty of upside on the roster. The team will be led by captains Zach Rozanski and Matt Martin. The addition of upper weights may give Upper Perk the opportunity for dual meet postseason.” … The Indians matched Pottsgrove in Frontier Division records during the 2017-18 season (both 4-1), but they emerged as division champions on the strength of a 39-38 dual-match victory over the Falcons.