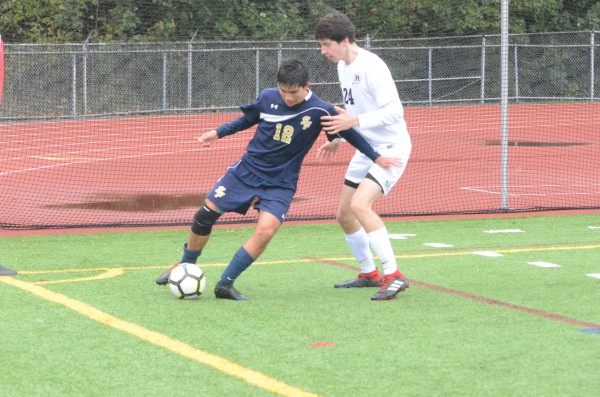 CHAMBERSBURG — Joe Caruolo has led a Radnor to a state final before, though with a twist.

Back in 2004, Caruolo was an assistant coach as the Raiders made it to Hershey, outlasting District 7’s South Park for the PIAA Class 2A title. The head coach then was Kyle Shilcock-Elliott, coaching his younger brother Keith, the youngest of three brothers named All-Delco.

Fourteen years later, Shilcock-Elliott long ago stepped aside from the day-to-day duties but stayed on to assist Caruolo, who after a stint coaching the Radnor girls team is the man in charge.

The fluidity of those dynamics speaks volumes about the community aspect that Radnor prizes. It also says a lot about how Shilcock-Elliott and Caruolo — contemporaries in school, All-Delcos at Radnor and Archbishop Carroll, respectively, who graduated in 1998 — work in unison.

“We recognize, understand and appreciate how much history means to us, both Kyle and I,” Caruolo said Tuesday, after his team beat Seneca Valley, 3-0, to advance to Saturday’s PIAA Class 4A final. “And we complement each other perfectly, so even when those roles are reversed, they’re not really, because we’re the same kinds of personalities that we were in ’04. To have the complement is huge. We really value and take great pride in the history of Radnor soccer.”

Radnor’s states berth will be the third in program history. It lost the Class AAA final to Fleetwood in 1980, led by legendary coach Bob Siemons. He was followed for another 14 years under Sam Holt, who mentored numerous All-Delcos (including the elder Shilcock-Elliott) and solidified Radnor’s standing among the area’s premier programs until he stepped down in 1998. The long-standing professional bond between Caruolo and Shilcock-Elliott, plus a rotating cast of assistants with experience in the community, is an extension of that continuity.

It’s no surprise, then, that Caruolo expressed his gratitude for that history that Holt preserved, for being able to step into the locker room at Chambersburg and tell his players that their accomplishment made them one of the best teams in a long line stretching back decades.

“To be a part of history and make your own history, that’s kind of what differentiates us from a lot of programs,” Caruolo said. “… It allows you to play for something special, to be part of that history.”

“This team has been a great group,” center back Bennett Mueller said. “We’ve all gotten along well together. (Caruolo and Shilcock-Elliott) have experience going through state playoffs in 2004, so they’ve definitely been there before and can help coach us to do the best we can.”

That level of engagement is necessary in an area like Radnor, a fertile recruiting ground for a plethora of private schools. And it’s helped inform the Raiders’ journey. Radnor (20-3-2) finished fourth in the Central League and earned the No. 7 seed in the District 1 tournament, requiring two away wins in playbacks to get to states as the district’s fifth and final entrant.

On the way to Hershey, they’ve topped the champions of District 3 (Cumberland Valley, 3-2), District 6 (State College, 2-1) and District 7 (Seneca Valley).

You can draw a straight line from the coaching staff to the cohesion it breeds on the field. A staff that has bonded over the years begets a team that grows together, that has coalesced from the youth ranks up, with an eye toward being a part of the varsity’s hallowed history.

The result for this Radnor team is a lineup with tremendous versatility. Even as injuries have limited a couple of players (namely first team All-Central midfielder Bobby Kirsch), they’ve continued on adapting roles.

The contrast was starkest on the outside Tuesday night. Seneca Valley rotated its outside backs at regular intervals. Radnor’s Josh Savadove and Ben Verbofsky, who’ve taken turns in midfield this year before owning the outside-back jobs, didn’t leave the field until Savadove was subbed off with a minute to play to a great ovation from the bench. Radnor’s first two goals resulted from players — first Bobby Hydrisko, then Jackson Birtwistle on Ben Engstrom’s goal — winning individual battles against those outside backs, gaining the inch that Savadove and Verbofsky never gave.

They’re part of a cohesive back four, with Mueller and Evan Majercak in the middle, that has allowed just three goals in its last five playoff games, with one more big one to go on the journey.

“It’s just all kind of mixed around,” Mueller said. “We try to find the best guys for certain spots. Having a nice solid unit has been great. We feel like we work really well together.”