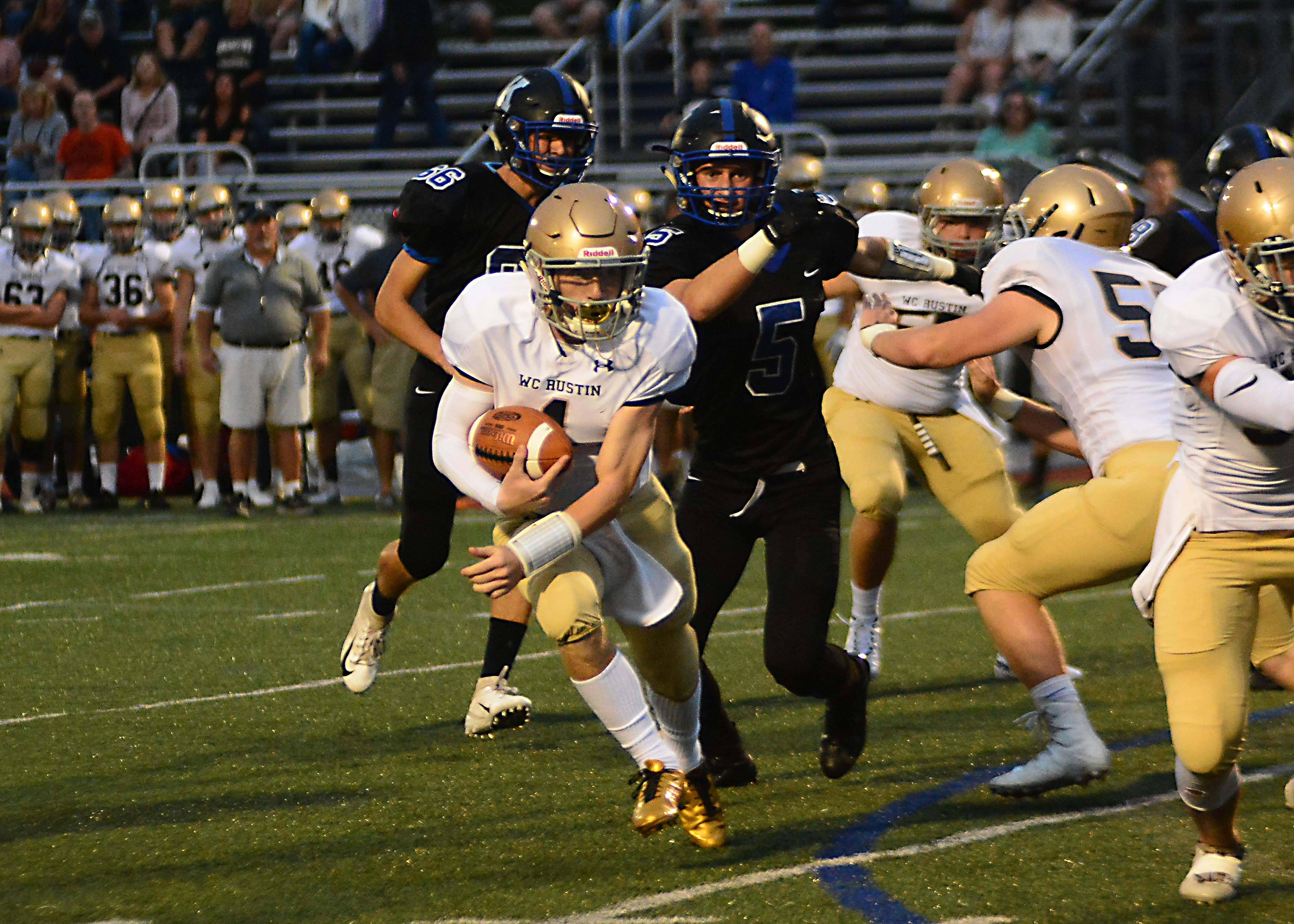 Rustin QB Will Pileggi looks for running room in a game in September. Pileggi led the Golden Knights to a 42-6 win over Academy Park in the District 1 Class 5A quarterfinal Saturday night. (DFM File)

The West Chester Rustin quarterback completed 10 of 11 attempts for 124 yards and three touchdowns in a 42-6 trouncing of fourth-seeded Academy Park in a District 1 Class 5A quarterfinal at Strath Haven.

“It feels pretty good right now,” he said. “I’ve never been this far in the playoffs. We made to (the quarterfinals) last year and that was it for us.”

It’s far from over for the fifth-seeded Golden Knights, who get a rematch with No. 1 Penn Wood in next week’s semifinals. Rustin (9-2) handed Penn Wood (11-1) its only defeat of 2018 back in September.

To say that Rustin dominated AP (9-3) would be an understatement. On the opening drive of regulation, Rustin chewed up 6:22 of clock with a methodical 12-play drive capped off by Michael Covert’s first of four touchdowns.

“We practiced really well this week and came out prepared,” Covert said. “All of the coaches got us ready. We went through all of their schemes with our offense and it showed off tonight.”

Covert ran for two scores and caught a pair of passes in the end zone. He totaled 85 yards of offense and also intercepted Academy Park quarterback Skylor Fillis.

“It’s not just me,” Covert said. “Really, all the credit goes to the offensive live.”

“They did a great job,” Covert said.

It was a long night for Academy Park, which had run three plays on offense with four minutes to play in the first half. By halftime, Rustin ran 36 plays to AP’s nine.

“Our goal is always to try and limit the other team to one possession a quarter, try to take off as much time as we can and control the clock” Rustin coach Mike St. Clair said. “We wanted to limit their possessions, especially with a scary offense that they have.”

Length opening drive ends for with a Michael Covert 1 yard run for a Rustin touchdown. 7-0 over Academy Park. #Delcofootball pic.twitter.com/TaO3nN7ceX

For the game, Rustin outgained Academy Park by a wide margin, 360-94. Owen Walsh led the ground attack for Rustin. The big fullback gained 99 yards on nine carries with a touchdown.

“They were a better team than we were and they dictated the pace of play,” Academy Park coach Jason Vosheski said. “When you have the ball for about the first nine minutes, whatever it was, and we put our offense out there and we run three plays and punt and then they go like another nine minutes … I think we had nine plays in the first half. For us, that’s not a recipe for success. Not to mention, they’re better than us. It’s that simple.

“They have a great combination of size and speed … and they run what they want to run on both sides of the ball.”

Academy Park’s defense couldn’t get off the field when it needed a stop. In the first half, the Golden Knights converted five third downs.

Barry Brown gave AP a spark when he returned a kick to the end zone after Rustin went ahead 14-0 in the second quarter. But the Golden Knights answered with another lengthy drive. The possession ended on a missed field goal, but AP couldn’t take advantage. Two plays later, Fillis (4-for-12, 43 yards) was picked off by Covert and Rustin’s offense was back in business. Walsh darted 44 yards untouched to the end zone to make it 21-6.

The second half was more of the same for AP. It fumbled the ball away on the opening kick, and Covert would go on to score three touchdowns in the quarter. He ran for a 15-yard score and caught TD passes of 17 and 20 yards.

“We always try to possess the ball for as long as possible and take it one play at a time. That’s been our motto all year,” Pileggi said. “We pound the ball, we pass the ball. That’s what we do. We practiced well all week and got through it today. It was a great win.”