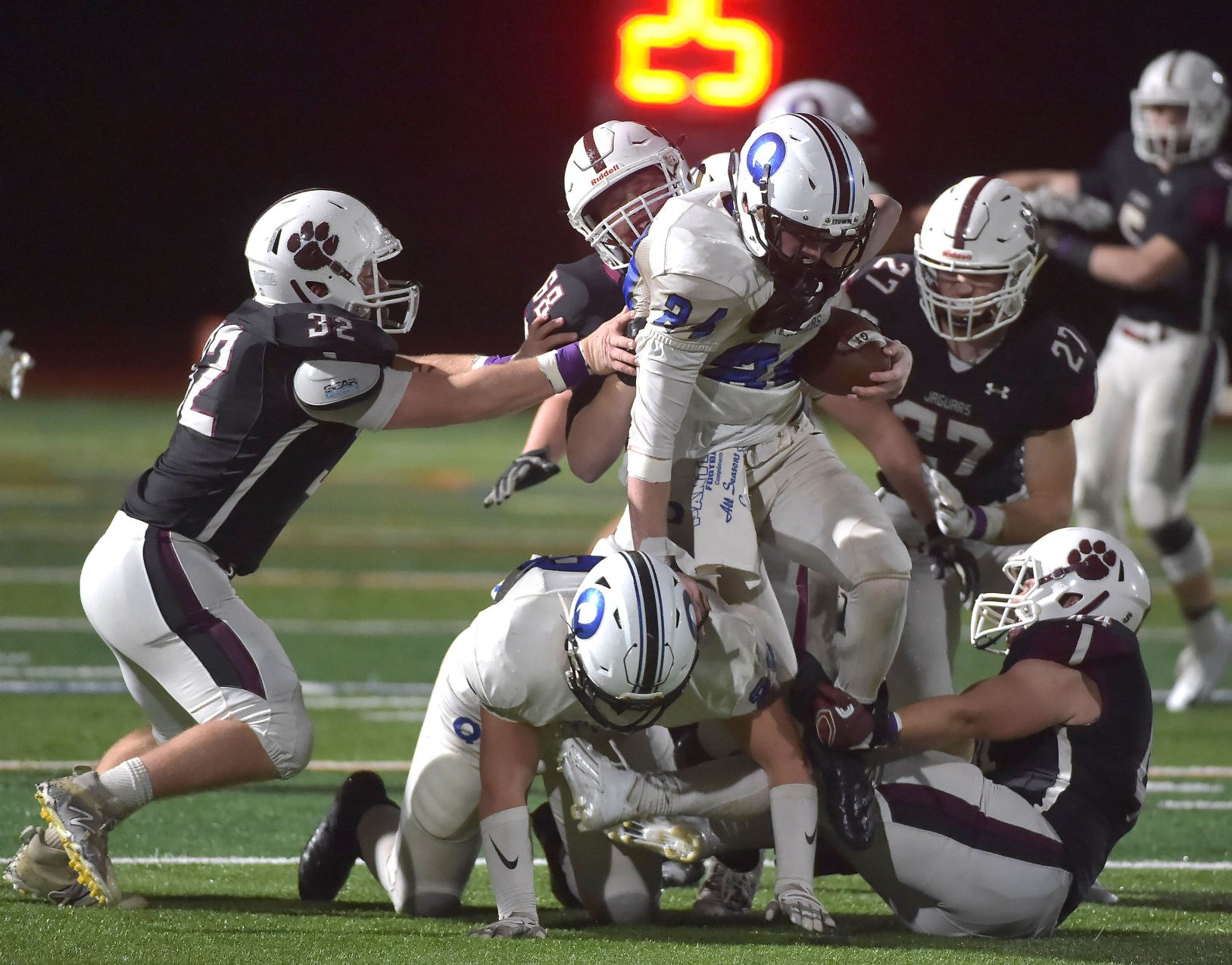 CONCORD — Nick Gabos and Danny Bradley each tried to avoid taking credit for a pass break-up in the second half of Garnet Valley’s District 1 Class 6A quarterfinal game against Quakertown.

“It definitely wasn’t me,” said Gabos, pointing to his teammate. “It was Bradley.”

Bradley smiled and nodded in affirmation, then said, “Let’s just say it was a team effort.”

That is the Garnet Valley way. That is oneness.

Doing things well on an individual basis pales in comparison to winning as a team.

. @GarnetValleyFB defense with a huge stop on 4th and goal.

Bradley’s tip in the end zone on fourth down halted a Quakertown drive at the 2-yard line. Quakertown had four shots at it, too.

That one play encapsulated third-seeded Garnet Valley’s defensive resurgence following a shaky start. Bradley and Gabos were partially responsible, but so were linemen Adam Oldrati, Cade Brennan, Alex Westburg and many others.

After allowing 11th-seeded Quakertown to score touchdowns on its first two possessions, Garnet Valley’s ever-improving defense put the clamps down. The Jaguars scored 35 unanswered points en route to a 49-14 shellacking, the second straight week they’ve won by that result.

“We just fixed our scheme and adjusted on the line,” Bradley said, “and we were able to fill the holes.”

It was the type of effort that coach Mike Ricci has come to expect. Even when things aren’t going well in the early going, Ricci trusts that his veterans on defense will right the ship.

“We have such great leadership from our seniors,” Ricci said. “There was never a doubt that they were going to get it straightened out. In fact, they told Coach Al (Jeff Allison), our defensive coordinator, ‘Coach, don’t worry about this. We know what we’ve got to do.’ When leadership comes from the team, like these guys do, it makes the job as coaches easy.”

PETE BANNAN – DIGITAL FIRST MEDIA
Quakertown quarterback Brad Bryan, center, gets a pass off ahead of hard-charging Jaguar Cade Brennan, right, in the third quarter Friday night at Garnet Valley. The Jaguars advanced to the Class 6A district semifinals via a 49-14 victory.

At one point in the second quarter, a Garnet Valley defensive player implored his teammates to be better. This happened after Garnet Valley marched in for its second touchdown. It was clear Quakertown had no answer for Garnet’s high-octane offense, so it was up to the defense to wake up and start playing like it was supposed to.

“Quakertown is very disciplined and physical. I like their quarterback and a lot of their skill guys hit the hole fast. They came out and did exactly what we were afraid they would be able to do early on,” Ricci said. “We had a couple of misreads and a couple guys … who were not fundamentally sound. Our coaches got on them about it and I love that they responded.

“They competed, their teammates picked them up. That’s not easy to do mid-game.”

After halftime, the Jags forced a pair of turnovers on downs and Gabos intercepted quarterback Brad Bryan, whose ability to extend plays with his feet gave the Jags’ defense issues in the first half.

“Once we adjusted and we learned what they’re capable of, we kind of came together and played as a team,” Gabos said.

Bryan (11-for-19, 110 yards) ran for 32 yards, including 35 in the first half. GV’s defensive front swallowed him up behind the line of scrimmage three times in the second half.

“It was just a great effort by everyone,” Gabos said.

When the second quarter ended, Quakertown (9-3) found itself trailing by three touchdowns. Bryan was sacked by Brennan on the final play of the half. Suddenly, the Panthers were out of their element against a superior Jags team determined to get back to the District 1 6A semifinals for the third year in a row.

“They made adjustments,” Bryan said. “They were stacking the box a lot. They were fast, off the ball, their D-linemen were all just really fast.”

Quakertown’s top ball carrier, Christian Patrick,  had 82 of his 91 yards in the first half.

“We knew we could start shutting them down,” Gabos said. “They have good athletes, but we made the right adjustments and started playing really well.”

Because Garnet Valley has so much depth, it’s unusual to see many two-way players. Bradley, then, is a rarity. He not only excelled in the defensive secondary but also flourished in the backfield, one of a half-dozen guys who can take handoffs and bust loose for the end zone on any given play. Bradley was one of four rushers to amass at least 70 yards on the ground, racking up a game-high 149 yards and two touchdowns.

The Jags totaled 519 yards of offense, including 455 on the ground. That facet of the game was brilliant. If the defense hadn’t figured things out, the “O” was locked and loaded, prepared for a shootout.

That wasn’t going to be a problem.

“When they came out in the first quarter and scored right away, we stuck together,” Bradley said. “Our D-line gets everything going, just like every other game. Once they got going, we picked it up in the secondary and just balled out.”

Next week that same defense is going to get its biggest test of the year, a rematch of last season’s district final with second-seeded juggernaut Coatesville.