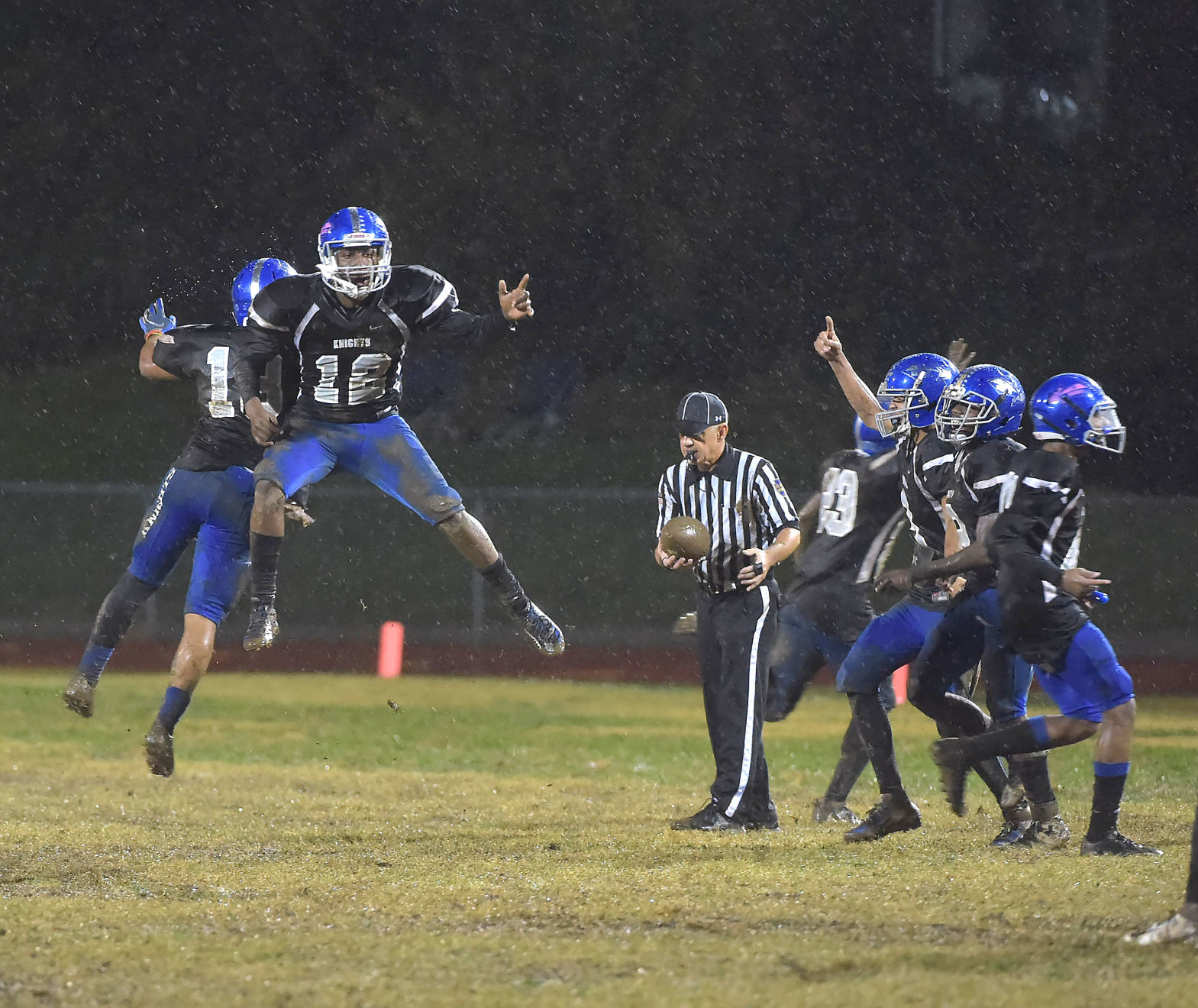 SHARON HILL — In the conditions at Knight Park Friday night, any handoff or throw ranked somewhere between treacherous and impossible. So whenever feasible, the Academy Park offense figured to simplify things with as few changing of hands for the pigskin as possible.

Usually, it was just one, from the center to quarterback Skylor Fillis. And twice, there was Fillis handing the ball to a referee after long touchdown runs.

Fillis ran for 219 yards in quagmire conditions, his 52-yard touchdown with 6:18 to play making the difference for Academy Park in a 20-19 win over Strath Haven in the first round of the District 1 Class 5A playoffs. The 13th-seeded Panthers (5-6) had led 19-7 at half. But Fillis’ late touchdown and an extra point from Shemar Simpson (despite being roughed on the play) gave fourth seed AP (9-2) a win and another home game next week against No. 5 West Chester Rustin. The Golden Knights handled Oxford, 28-0.

Fillis called his own number time and again. He completed his first pass, a 13-yard hookup with Alphonso Hayes, then came up empty on the last five attempts. With the aerial game out of the picture and the swampy conditions not favoring AP’s tendency to spread it out with quick-cutting sweeps and reverses, Fillis’ straight-ahead style was the order of the day.

“In conditions like this, anything can happen,” he said. “So we just have to make sure we take it step by step, every play.”

Fillis carried 21 times for his 219 total. He busted a 60-yard touchdown run in the first half, 22 seconds after Ibo Pio’s 60-yard score had given the Panthers a 13-0 lead. Five other Knights carried the ball a total of 12 times for 70 yards, 45 coming on one snap from Zion Bradley. Overall, Fillis accounted for 232 of the Knights’ 284 yards.

“We thought it wasn’t going to be like this when we first came out,” Fillis said. “So I guess it changed the attitude of the team where everyone was a little disappointed because it was a little slippery out. It’s just adversity that we have to get used to.”

That’s not a ton of offense. But the Knights’ defense and special teams made it stand up. AP turned the momentum on the first play of the season half, the first touch of the game for playmaker Edward Soloku, who took the kickoff back 76 yards for a score.

“Big boost. He sparked the half, I think,” Fillis said.

The Knights turned the tables on defense with three turnovers after the break. AP allowed 154 yards in the first half, with Pio’s score augmenting touchdown runs of 15 and two yards from Zack Hussein, but clamped down after the break.

Zack Hussein in from the 2 on fourth and goal. 19-7 Haven 2:27 to half. pic.twitter.com/tkmYcBSisL

Daniel Doegan snagged an interception of Jake Fisher with a leaping grab in the third quarter. Utensee Nankay, (3.5 tackles for loss), Brian Erskine (2.5) and Tyree Estes (2) figured out how to bottle up the Panthers running attack, allowing just 81 yards on the ground after half. And twice in the fourth quarter, when Strath Haven put the ball on the ground, AP fell on it, both times nose tackle Prince Wilson emerging from the muddy pile.

“Sometimes if I’m moving too slow, I just speed it up every time,” Wilson said. “That works for me. … It’s more of a strong stride, get you to the hole quicker and faster.”

Fumbles ended the last two Haven drives. The last included a fourth-and-20 hookup between Fisher and Arion Ford for 28 yards to keep hope alive. Fisher also hit Ethan Belville with a 57-yard wheel route in the first quarter to set up the opening score.

Fisher, who played both ways as a safety, had some time to enjoy the experience of his last high school game in absurd conditions. “This is just football,” Fisher said. “I wouldn’t want my last game to be anyway else, other than the loss. But this is perfect for me.”

Hussein finished with 118 yards on 24 carries, while Pio tallied 93 yards. But even for an AP defense that isn’t exactly a vintage stingy unit, the pride factor in the second half helped the Knights rise to the occasion.

“My defense, we were in the locker room, we put our helmets on, we didn’t want to go home,” Wilson said. “I feel like my team, we’re really strong and we’re real tough.”