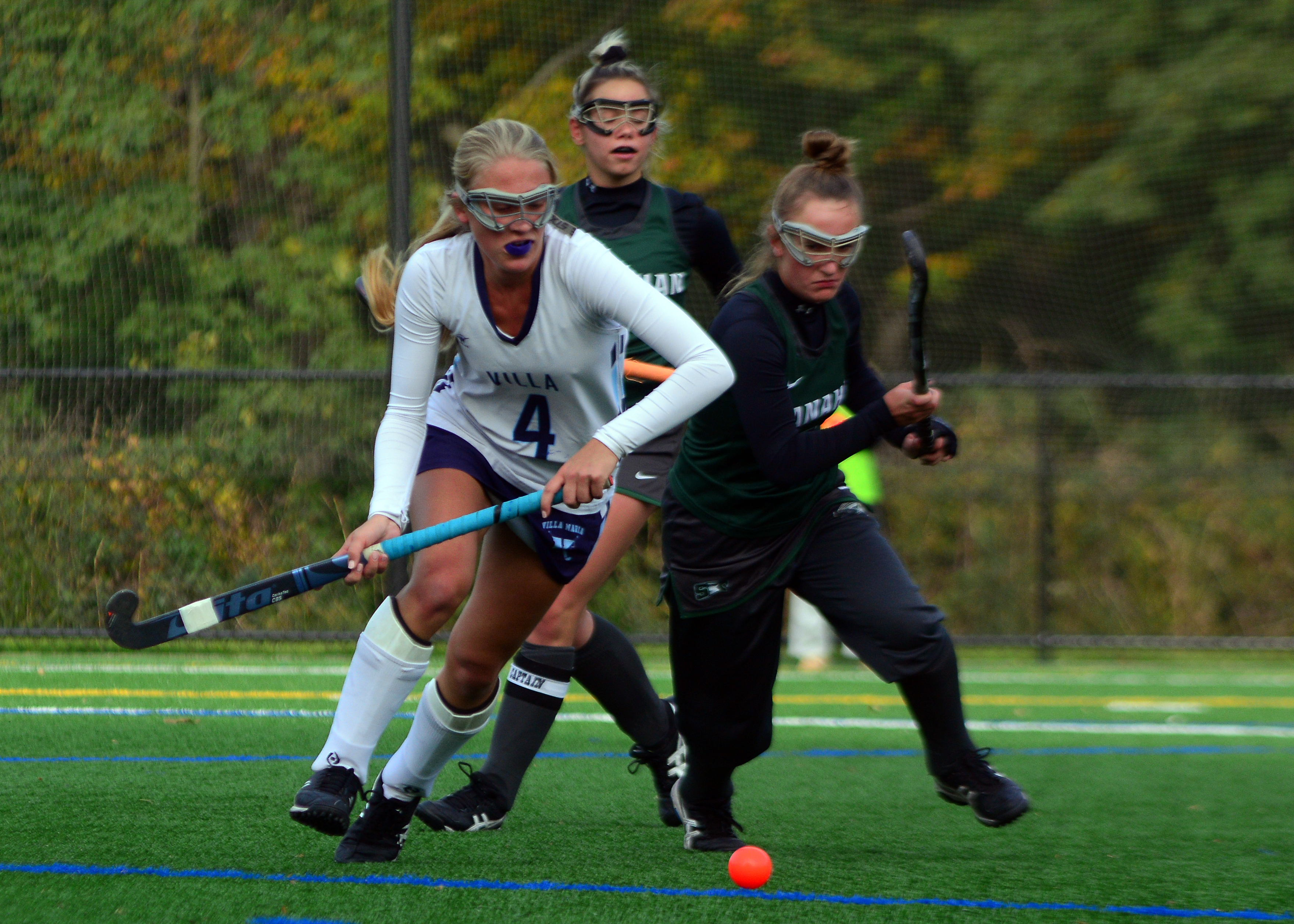 MALVERN—The Hurricanes attacked with their usual category 5 force, but visiting Bishop Shanahan was up to the task for much of the game, fending off attack after attack. But in the end, No. 2 Villa Maria (15-2) was able to slip three shots past Eagles’ goalie Amber Bryan, who had an otherwise spectacular game, as the Hurricanes topped No. 7 Shanahan (12-7-1) by a score of 3-0 in Thursday’s quarterfinal round of the District 1, Class AA field hockey playoffs.

With the win, the Hurricanes assured themselves of a slot in the state tournament, and advance to the district semi-finals, where they will face a familiar foe in No. 3 Mount St Joseph.

“To Shanahan’s credit, they did a great job with their flyer (on corners) getting in the way, and their goalie was phenomenal,” said Villa coach Katie Evans. “But it was just one of those games where you just had to keep pushing and eventually it went our way.”

The game was scoreless for much of the first half, and, for the first ten minutes, offense was limited to just one corner each. Villa began to pick up the pace over the next twenty minutes, and by halftime, held an 8-3 margin in penalty corners. But it wasn’t until just over four minutes to go into the half that Villa’s Hannah Miller sent a pass over to Annie Shaw, which the latter slammed home, that the deadlock was broken.

“I started getting pretty hectic and crowded around the cage for a lot of the first half,” said Shaw. “We just tried to spread out a little more and got the opening. It set the game in motion for us. Once we got that first goal, we were going to step up our play the rest of the game.”

Villa came out in the second half like a team on a mission. Relentless in their attack, Villa forced a whopping 13 second half penalty corners. But thanks to Eagles’ goalie Amber Bryan, who finished the day with 19 saves, along with the Shanahan corner defense, the Hurricanes did not convert a single one.

The Hurricanes did score a pair of second half goals. The first came when Mary Harkins assisted on a goal by Meghan Dillion, with the second coming on an unassisted goal from Margaret Carden.
“It’s a whole different atmosphere in the playoffs,” said Villa’s Adele Iaccobucci. “Every team comes at you with everything they’ve got, because if they don’t it could be the end of the season. We created a lot of opportunities, we just couldn’t finish. But our attack was going well, working our transitions and creating good opportunities.”

Up next for the Hurricanes is round three against Mount St. Joe’s. Villa has won both previous meetings, but both were nailbiters, 3-2 at Villa and 5-4 at Mount.

“It’s tough because you know each other so well, and you know how much both teams want it,” said Evans. “But I think we know what we do well against them, and what their strengths are. But it just a matter of preparing the girls so they go in with confidence they can get it done.”

The Eagles aren’t done just yet. Shanahan will travel to Gwynedd Mercy on Tuesday in a play-back bracket game. The top five finishers in District 1 AA move on to the PIAA Championships.

“My message to the girls was to play like this on Tuesday,” said Roselli. “We played very well today. We play like this Tuesday and the next game, that fifth spot in states is ours.”