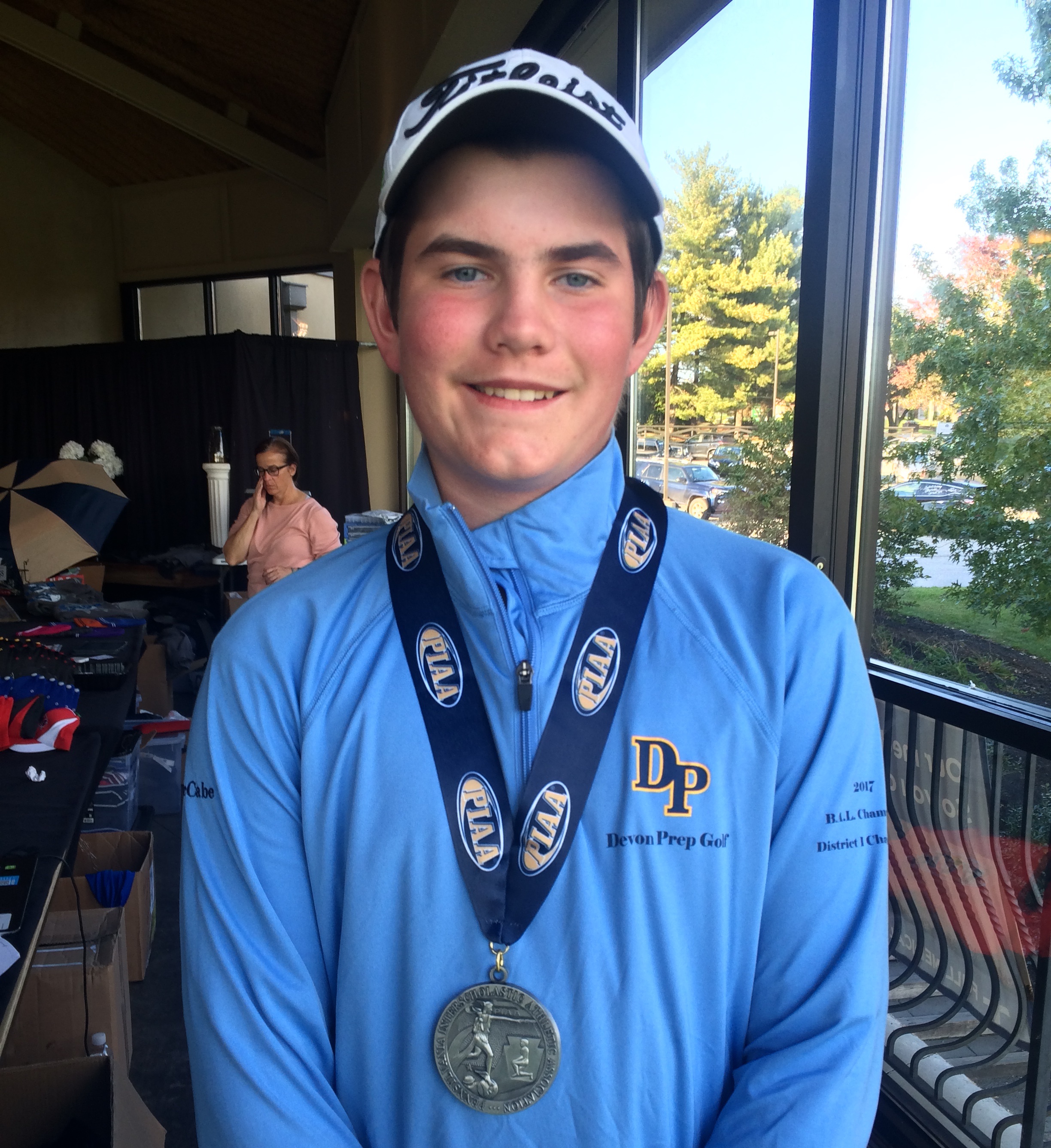 His one-over-par round of 72 boosted him into a tie for second place in the Boys’ AA Division, for a two-round total of 151, just two strokes behind winner William Mirams of Notre Dame East Strousburg.

“It felt very fulfilling to receive my [second-place] medal,” said McCabe, who finished 15th at States as a freshman. “It felt good to know that I improved from last year. I was hitting my wedges better today. Yesterday I was missing a lot of greens – the greens are firm, and it’s hard to spin anything on them. I also was hitting my driver a lot better today.”

McCabe began his round Tuesday with a couple of birdies, and he finished with four birdies for the round.

“Ryan’s wedges were amazing today – he hit them very solid, on point, today,” said Devon Prep co-coach Monica Pedano. “Yesterday, a lot of his shots were over the green, and after the round Coach Rogers [co-coach Brian Rogers] went to the range with Ryan and worked with him, and we really worked on honing it in.

Rogers added, “Ryan drove the ball really well today, he hit everything solid. He had a very solid round.”

In the Boys’ AAA division, Palmer Jackson of Franklin Regional (District 7) shot a red-hot 67 Tuesday for a total of 140 and a four-stroke margin over second-place finisher Jimmy Meyers of Central Catholic (District 7).

“It felt really good to get that medal; after yesterday’s round I was aiming to get a top 10 finish,” said Bennink, who shot 76-73 for a total of 149. “I got the putter going today. My putting has been cold in the post-season, but I made some putts when I needed to today.”

“It feels great to wear this medal, it’s cool to have a medal around my neck,” said Ryan, who shot 77-72 for a two-day total of 149. “I’ve been coming here for three years but haven’t finished in the top 10 until today. Yesterday I struck the ball pretty well but my putting let me down; but today I did everything pretty well, I drove the ball well on the front nine and made some putts on the back nine.”

The Girls AAA Division winner was Caroline Wrigley of North Allegheny (District 7), who shot 74-73 for a total of 147 for a seven-stroke margin of victory.

The PIAA state tournament turned out to be a little disappointing for West Chester East freshman Victoria Kim, fresh off her second-place finish at the PIAA East Regionals and first-place finishes at the District 1 and Ches-Mont Championships earlier this month.

Conestoga senior Samantha Yao, who tied for fifth with a 78-80 for a total of 158, said, “This is a tricky kind of course, and today I think the wind took my ball a little bit. Everything bounces here, and the fairways are narrow. It wasn’t my best round by far, but it was a lesson to be learned.”

Pennsbury sophomore Jade Gu finished seventh, and Downingtown East senior Liddie McCook tied Kim for 11th with an 83-82 for a total of 165.

Rogers said, “The par 3’s here are reasonably challenging, with their length and the wind today. I think, all in all, they set this course up very fair.”

Wallace said, “The course played tough, I hit my driver well Monday, when I made three birdies in the middle of the round, but some of these holes are tight driving holes. On No. 6, the fairway is only 12 yards wide. I like the elevation changes; they can make club selection a challenge.”

Will Bennink said, “The course is playing tough; it’s really windy, the tee shots are tough. I felt like I putted better today, I got used to the greens. The greens are very true and consistent, and I like the par 5’s – they’re gettable [in two] but not too easy.”

“I liked that we could play the ball down; we didn’t have to lift and clean it,” said Connor Bennink. We’ve had a lot of rain lately, but the groundskeepers here did a great job of keeping the course dry.”

Fitzgerald, a first-timer at States, said, “Playing here was a great experience. The course was tough but fair. Some of the elevation drops were pretty cool.”

“I like this course,” said Ryan. “It played a little hard, the fairways were narrow, and the greens were really pure, putted true.”

Kim said, “The course is really narrow. The greens were rolling fast, which was nice. There was so much slope [elevation changes] to the course.”