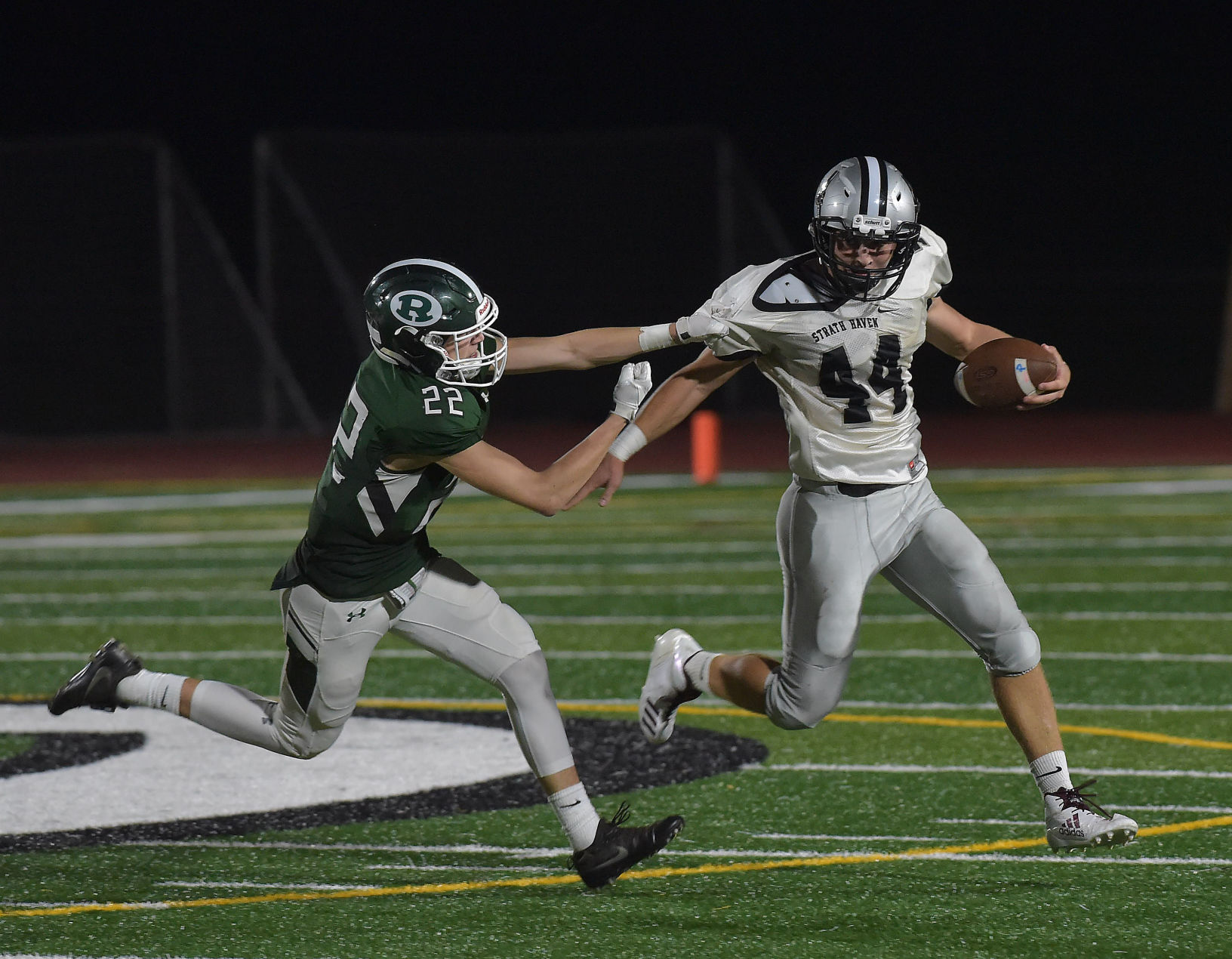 After his family moved from the Northern Highlands Regional School District in Allendale, N.J., Wilson had plenty to catch up on at his new school, Strath Haven. And among the football-specific curriculum was a crash course in Panthers history in the weight room to get incorporated with his new mates.

“I learned it real quick,” Wilson said. “They’ve got the website and everything. I learned about the ’90s and the heyday, the state championships. It’s pretty cool.”

While the Panthers may not be an immediate threat to add to that haul of banners, Wilson has fit in with the blue-collar ethos upon which Kevin Clancy built that success. The three turnovers Wilson collected Friday in a 54-26 win over Marple Newtown have the Panthers headed in the right direction.

The win arrests a four-game slide for the Panthers (4-5, 4-4 Central) and offers a chance to finish at .500 with Harriton looming next week. It solidifies their position in the District 1 Class 5A field, where they were ranked 15th for the 16-team field. They can perhaps rise as high as the 11th seed they garnered last year.

Jake Fisher up and over for the TD. 7-6 Strath Haven. Elway-esque. pic.twitter.com/9hNcaoluMD

Wilson played a big part Friday in getting them off the schneid. He twice picked off Marple Newtown quarterback Brian Joslin, dropping back into coverage over the middle and jumping crossing patterns.

“I’m pretty sure it was the first route that they beat us on, it was that big play,” Wilson said. “So the next two plays when I saw the trips, I opened up to it, and I was under it and the ball came my way and I got it.”

He also hopped on a Marlon Weathers fumble caused by quarterback/linebacker Jake Fisher in the third quarter, stamping out the last bit of Tigers fight in a 40-12 game. Just for good measure, Wilson proved worthy of the hands team by cleanly nabbing an onside kick after Marple got within 47-18.

Ethan Belville from the 6. Wouldn’t have had him in flag. Kick finally good. 47-12 Haven. Run that clock. pic.twitter.com/5v3XC4m2uQ

Hussein also needed to deploy another tool beyond his bullishness with the ball. His fumble on the opening series opened the door for Marple to take the early 6-0 lead on a Joslin rushing touchdown, set up by a 38-yard hookup between Joslin and Kevin Merrone, the crossing route Wilson referenced.

Hussein has had issues with fumbling this year. But as he has in the past, he shook it off.

“One of our captains, Ethan Belville, said before the game, ‘It’s alright if you fall down, because your teammates will be there to help you back up,’” Hussein said. “That’s what they did.”

Belville’s help was both metaphorical and tangible, running for 114 yards in the first half on the way to 131 yards on 13 carries. He had a 60-yard burst in the second quarter to augment Fisher’s three rushing scores, and he caught a 32-yard wheel route from Fisher on third-and-16 in the third quarter to set up a Hussein score.

Marlon Weathers in from the 1. Being down 28 seems to have awoken Marple. 2-pter fails. 34-12 Haven. pic.twitter.com/CG21Rka6au

“Zack’s a beast,” Wilson said. “He’s just always going, he’ll never stop. He gets down on himself, but the next play, he’s just going as hard as he can.”

The offense didn’t spark to life for Marple Newtown (4-5, 3-5) until it went down 34-6. Weathers ran for 100 yards after the break, tallying 23 carries for 132 yards and a score. After the running clock was implemented, backup QB Joe Paoletti threw for touchdowns of 45 yards to Colin Ferry and 13 to Brett Shoman, finishing with 89 yards passing to Joslin’s 69.

Jake Fisher bulls into the end zone from the 4 on fourth and 1. 13-7 Haven after a blocked PAT. 9:31 to half. pic.twitter.com/IpxafK2gAG

It wasn’t enough in the face of a stout defense led by Wilson, who looks like he’s called Strath Haven home his whole career.

“I always love to win,” he said. “I love being a part of a program that, every day, we’re out there competing, trying to get better, and Coach Clancy’s leading that.”