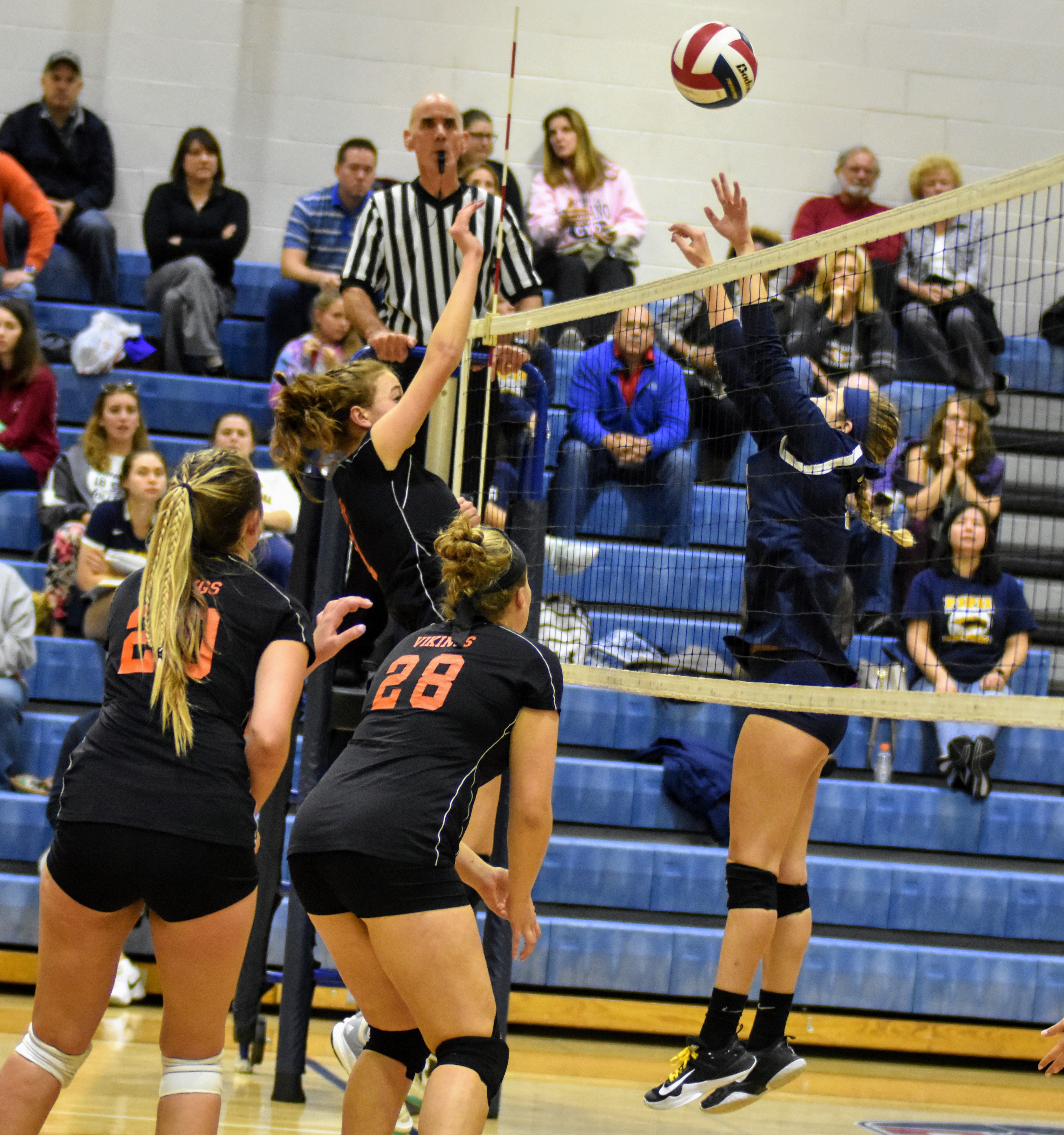 Perkiomen Valley's Izzy Clauhs and Upper Merion's Kelly Moore go up for the ball during the PAC semifinal on Tuesday. (Barry Taglieber - For Digital First Media)

With the win, top-seeded Upper Merion sets up a rematch of last year’s title game with Pope John Paul II. The rivals will meet Thursday at 7 p.m. back at Spring-Ford.

“We’re definitely looking forward to coming back and trying to dominate,” Upper Merion senior Dannielle Chung said. “We all know we can play a lot better than we did last year. I think we’ve really grown as a team this year because we’ve all grown up a little bit together.”

No. 4 Perk Valley got off to a great start, building a 9-2 lead early on in the first game. They maintained a comfortable advantage until Upper Merion went on a 6-2 run to cut their deficit to two, 15-13. Upper Merion trimmed the margin to two again, 20-18, but that’s as close as they’d get before losing, 25-21.

“We were kind of just going through the motions,” Chung said. “We were like, ‘Hey we actually need to start playing now,’ because we tend to relax a little bit in the first set, which is not great. We have to get better at starting off in the first set. It doesn’t really feel great, but we come back most of the time.”

The second game was tight throughout. Upper Merion’s biggest lead was four, 5-1, and Perk Valley’s was two, 19-17. After a couple referee conferences, Perk Valley held a 21-20 advantage. Upper Merion won five of the next seven points to take the game, 25-23, and tie the match, 1-1.

The third game was another close one. Upper Merion jumped out to early leads at 6-1 and 15-9, but Perk Valley rattled off six straight to take a 16-15 lead. Upper Merion scored four straight points to close out the match, 25-20.

Upper Merion made a statement in the fourth and final game. With the score tied at two, Upper Merion sandwiched two 5-0 runs around one Perk Valley point to take a 12-3 lead. They maintained a sizeable advantage, peaking at 24-9 after six straight points with Katelyn O’Brien serving. After four straight points, Upper Merion finished game and match, 25-13.

“We had relaxed a lot more,” Chung said of Game 4. “We weren’t really thinking about we need to put the ball here, here or here. We were just not thinking about it and just doing what we know how to do and working with each other, which is why we play so well. We’ve been playing together for so long, we just gel. We don’t even have to talk. We just moved with each other, which I think really clicked in the last set.”