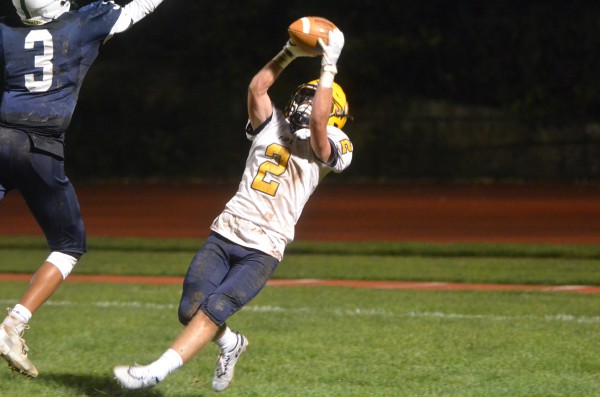 POTTSTOWN >> This is not your older brother’s Pope John Paul II football team.

The Golden Panthers, a team that went a combined 9-53 in its first six seasons of existence, are here to stay in 2018.

“A lot of us were a part of that group that finished 0-11 our freshman season,” said wideout CJ McCafferty, now a senior, of the 2015 season. “We just progressively got better each year and built up our culture.”

On a night where they admittedly didn’t have their best game, Pope John Paul II made enough plays to pull out a 20-12 win over Pottstown at Grigg Memorial Field.

With the result, PJP (3-1 Pioneer Athletic Conference Frontier Division) improves to 7-1 overall to tie its program mark for wins in a season. Just don’t tell it to head coach Rory Graver.

“I try and tell our guys all the time, ‘We can talk about that stuff at the end of the year banquet,’” said Graver of the landmark win. “Right now our focus is one game at a time.”

Junior quarterback Kamal Gray — who has been lighting it up in his first year with PJP — was held to a modest 150 yards passing by the Pottstown (1-3 PAC Frontier, 4-4 overall) defense. The Trojans, who lead the league in pass defense, forced two interceptions and came away with a couple of sacks on the night.

“They were throwing a bunch of different looks at us,” said Gray. “Things we were prepared for, we just didn’t execute. Luckily a lot of guys stepped up and we were able to get this win.”

McCafferty pulled in 10 receptions for 117 yards and a pair of touchdowns while running back AJ Natale scored the game’s final touchdown on a nine-yard flush to the left side late in the fourth quarter.

Cornerback Steve Skarbek then sealed the game with a clutch interception on Pottstown’s ensuing drive to send the PJP offense into victory formation.

“I’ve got to give a lot of credit to Pottstown,” said Graver. “That is a good football team. We didn’t play up to our best, but I think that has more to do with them (Pottstown).

“I’m proud of our guys. We found a way to win it and that’s most important.”

Pottstown, a team that hasn’t finished above .500 since 2015, is on its own ascension this season. Despite stalling against the PAC’s Frontier Division so far, the Trojans entered Friday night’s game ranked as the No. 2 seed in the District One Class 4A playoffs.

Pottstown quarterback Josiah Wiggins, who has been the focal point of the Trojans’ offense all season, left the game during the second quarter with a lower leg injury. That gave way to Darius Smallwood, a sophomore without much varsity experience.

“Darius did a heck of a job for us at quarterback,” said Pottstown head coach Mark Fischer, who didn’t have an immediate update on Wiggins. “As the game went on, guys started to settle into their roles. Guys stepped up for us all four quarters.”

Moments after PJP’s opening touchdown late in the second quarter, Pottstown’s Nehemiah Figueroa returned the ensuing kickoff 84 yards for a touchdown to keep the Trojans on pace at 7-6.

It wasn’t until late in the third quarter — Gray finding McCafferty for an 18-yard touchdown pass — that the PJP offense was able to break through against Pottstown’s defense. But the Trojans answered yet again, this time with a seven-play 57-yard drive resulting in Jonathan Oister pounding it in from nine yards out to make it 14-12 with 10 seconds left in the third quarter.

“It was a total team effort for us tonight,” said Fischer. “We know they (PJP) like to throw the football a lot. They’ve got a really good quarterback and some good receivers. So we went man. We thought our athletes were just as good as theirs, and it put us in good situations.”

From there, though, Pope John Paul II put together a textbook seven-play 70-yard drive that took up well over half of the fourth quarter before Natale plunged his way into the end zone for the game’s final score.

Up Next >> Pope John Paul II will close out the conference regular season next Saturday with a home game against Upper Merion. Pottstown will travel to Upper Perkiomen Friday night.