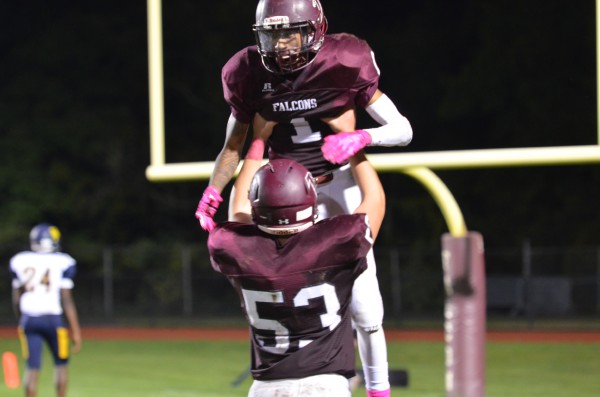 “Jay!” he yelled from the sideline before subtly pointing his thumb at his wideout in front.

Moments later, Jay Sisko dropped a deep ball right into the hands of Jimai Springfield on the way to a 36-yard touchdown.

Just what the doctor ordered.

Sisko threw for three touchdowns in the first half as part of a monster performance, leading the Falcons to a dominant 51-0 win over Upper Perkiomen at Pottsgrove’s Rick Pennypacker Field.

“We’re reading each others’ minds right now,” said Hawthorne of his communication with Sisko. “That’s where you want to be with your quarterback. You want your coach out there on the field, and that’s Jay to a T.”

Sisko racked up 200 yards passing and four touchdowns through the air, nearly matching his totals for the season entering the night. His main target, the speedster Springfield, pulled in two receiving touchdowns and also returned a punt for a score.

“They were one of the teams that was so focused on our run game, that they were opening up our pass game,” said Sisko. “Coming into the game, we knew that if they put nine in the box, we’ll throw the ball. That’s what we did tonight.”

“We were rocking them to sleep with the run, then opening it up with a pass,” added Springfield.

With the win, Pottsgrove improves to 3-0 in the Pioneer Athletic Conference’s Liberty Division (7-0 overall) while Upper Perk (0-3 PAC Liberty) drops to 1-6 overall in the midst of a five-game losing streak.

The Falcons held Upper Perk to just 12 yards of total offense and just one first down well into the fourth quarter before the reserves took over. Meanwhile Pottsgrove’s offense racked up 345 total yards, finishing with more passing yards than yards rushing for the first time all season.

Pottsgrove running back Isaiah Taylor runs it up the left side on the way to a touchdown during the first quarter of Friday’s game. (Thomas Nash – Digital First Media)

“They’ve got physical athletes all around,” said Upper Perk head coach Tom Hontz of Pottsgrove. “They put a boatload in the box and you can’t even move the ball on them. We let them win that field position battle and eventually they just break one and throw a deep ball. They’ve got so many weapons, just a really talented team.”

Sisko led the Falcons with 68 yards rushing on 10 carries while running back Isaiah Taylor — the area’s leading rusher coming into the night — rushed it 11 times for 48 yards and a score. He also pulled in a 46-yard touchdown reception during the first quarter.

Pottsgrove’s Jimai Springfield (1) looks for running room on a carry during the first half of Friday night’s game. (Thomas Nash – Digital First Media)

Through the air, Sisko completed seven of his season-high 12 passing attempts. He connected with Springfield three times while tight end Ryan Bodolus had two catches for 83 yards, including a 41-yard touchdown.

Hawthorne was quick to give plenty of credit to the guys who don’t get their names on the stat sheet.

“It’s also those unsung guys, Nate Tornetta, Justin Adams, Rylee Howard,” he said. “These guys do it every play. You don’t hear much from them, but they’re legit, good football players who do their jobs and allow the other guys to get some big plays.”

With running back Tyrese Reid on a snap count while dealing with a high-ankle sprain, Upper Perk’s offense never found any sort of rhythm. Quarterback Hunter Flack got the start for the Tribe and never got too comfortable under center. He and Tyler Weber finished with a combined 24 yards passing while completing just five of 22 passing attempts.

Upper Perk’s ground game was kept well in check throughout the night, held to a combined -4 yards in the first three quarters before freshman Jose Vera found a spark with 61 yards rushing on five carries against the reserves.

Shut out for the second time this season, Hontz walked off the field Friday night thinking back a few years.

“About three, four years ago we were in the same boat. Leaving Pottsgrove after getting beat like this,” recalled Hontz. “We’ve just got to work and try and build the program back up again.”

Honorary Captains >> As part of Pottsgrove’s annual Pink Out Night, Paul and Lori Exley were recognized as honorary captains with the Falcons prior to the game.

The Falcons awarded the Exleys with a game ball signed by all the players following the win.

Garnet Valley shows they can air it out in win over Lower Merion
Daniel Boone no match for Gov. Mifflin