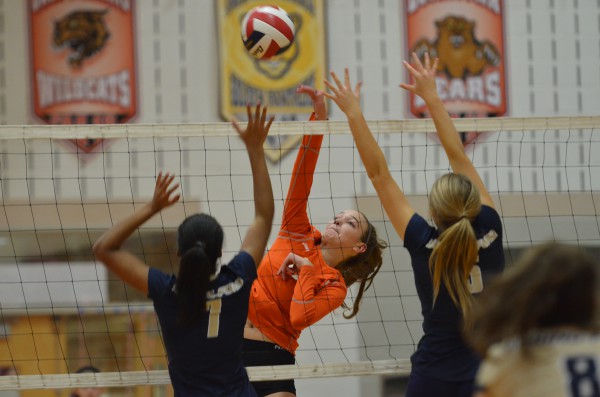 GRATERFORD >> The crowd at Perkiomen Valley High School got what it came for on Monday night.

And no, not because of the give-away pink volleyballs that were thrown into the stands during pregame introductions.

Perk Valley and Spring-Ford put together a high-intensity match in front of an energized crowd during the host Vikings’ Dig Pink Night. In the end, the Vikings pulled out a 3-0 straight-set win.

“This is what volleyball is all about,” said Perkiomen Valley head coach Drew Scheeler. “This one was a lot of fun. The last couple of years, we’ve been back and forth, back and forth with Spring-Ford. So it’s fun for everyone — the kids on both sides, the student section and the fans.”

Set scores were 25-22 and 25-21 before the Vikings closed out the Pioneer Athletic Conference (Liberty Division) match with a convincing 25-15 win in the third set.

With the win, Perk Valley improves to 4-2 in the Liberty Division (8-3 overall) while Spring-Ford (6-5 overall) drops to 2-4 in the division.

Outside-hitter Lia Torrillo and middle-blocker Sarah Straub were a force above the net throughout the night. Torrillo finished with nine kills and three blocks while Straub ended up with eight kills, three of which came during the crucial final stretch of the opening set.

“It’s nice to have girls that are tall. You can’t teach height, as they say,” said Scheeler of the two seniors with a laugh. “They controlled it tonight. Sarah came back and started balls down the middle. She’s hard to defend, she’s our weapon in there.”

Senior setter Grace Herbein finished out with nine assists and a pair of blocks in the win while classmate Liz Caruso posted nine digs on the night.

Spring-Ford only led for a few small stretches on the night. The Rams jumped out to a 3-0 advantage in the early going of the final set, but once Perk Valley settled in and got back into rhythm, it was game over.

“We struggled a little bit with serve-receive tonight,” said head coach Josh McNulty. “Our setters were trying to force it a little bit. So we got caught in some tight sets at times. We’ve had  a lot of trouble this year with making unforced errors. So we’ve been trying to minimize those.”

Perkiomen Valley’s Sarah Straub (28) celebrates with teammates after picking up a kill during the second set of Monday’s match against Spring-Ford. (Thomas Nash – Digital First Media)

In what is still a very much up-for-grabs Liberty Division — only two games currently separate Spring-Ford from newcomer Boyertown at the top — Rams’ head coach Josh McNulty knows that the toughest stretch of the schedule is on the near horizon.

“We still have four PAC games to go over these next two weeks,” he said. “We split with Methacton, lost both to them (Perk Valley), but we beat PJP this year. We lost the first one to Boyertown, but we’ve got them again. We still have Upper Merion.

“It’s crazy how this will shake out. Anything can happen at this point.”