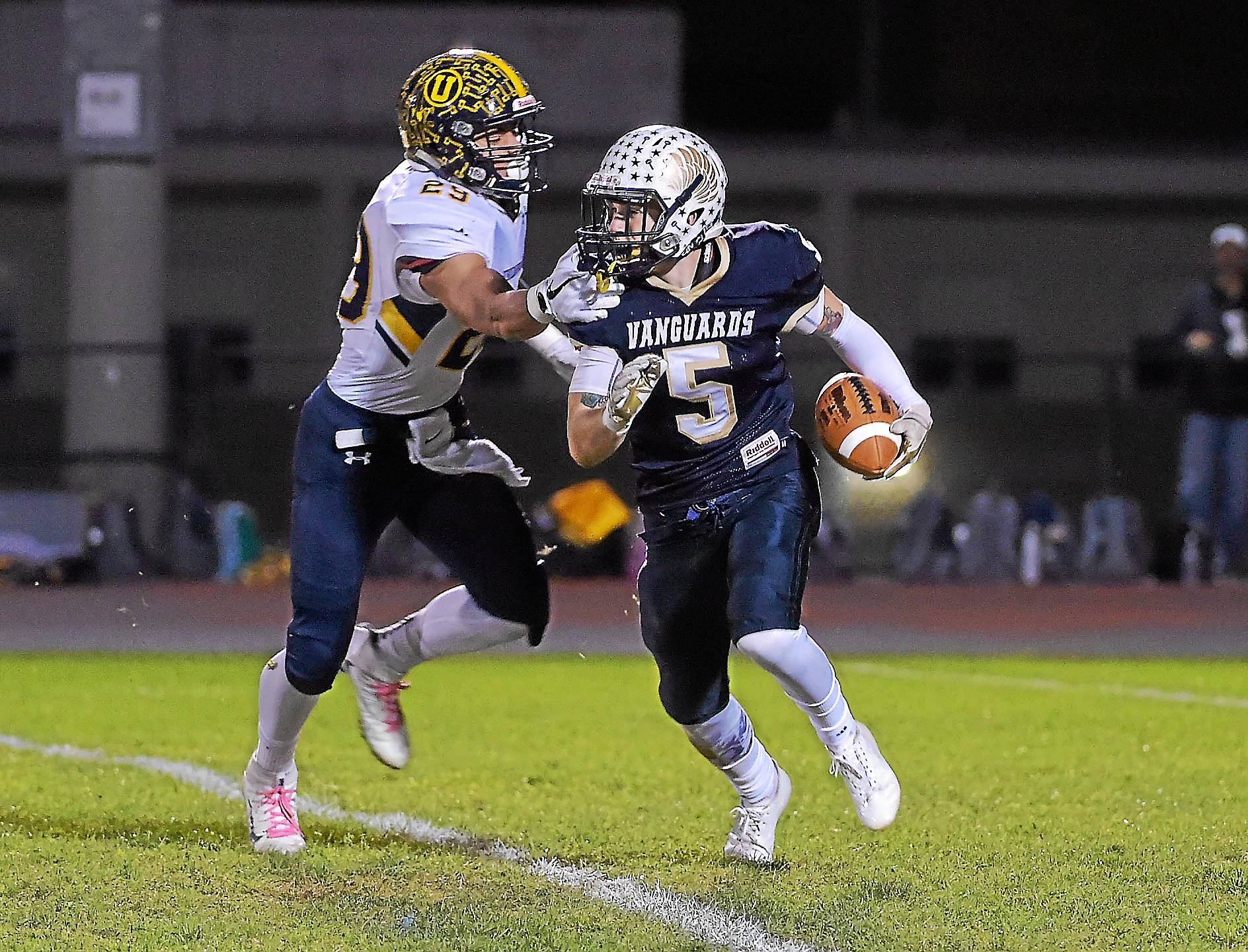 Despite five touchdowns by Julz Kelly, Sun Valley lost a shootout to Oxford, 50-49.

ASTON — When Oxford visited Sun Valley on Friday night many figured there would be a good amount of points put on the new video scoreboard at Dr. Wally Stadium in Aston.

The Hornets and Vanguards did not disappoint the crowd and gave everyone in attendance an epic thrill-ride that ultimately saw Oxford outlast Sun Valley, 50-49. The game truly was not over until the waning seconds when Oxford’s Brandon McWilliams intercepted a ball in the end zone to seal the victory for the Hornets.

“I’ve been doing this a pretty long time and this was craziest and coolest win that I’ve ever been a part of,” said Hornets coach Mike Means, whose team improved to 4-2 overall and 1-1 in the league.

As you could guess, defense was encouraged, but not really mandatory in this one. Oxford tallied 611 yards of total offense, while the Vanguards had an astounding 620 yards. But Oxford had to rely on its playmaker, quarterback Brett Kochmansky. His long pass play to Timothy Faber set up the quarterback’s two-yard scoring run, which turned out to be the game winner with 22 seconds left in the contest.

“This is a night that I’m going to remember forever,” Kochmansky said. “This is by far the most exciting game that I’ve ever played in for any sport. It was really awesome to be in a shootout like that and show what our offense can do.”

“The kid’s a gamer,” Means said. “When it came down to crunch time at the end of the game and we need him to make big plays the most, he came up and made those plays. We scored 28 points in the first half and at halftime I was really hard on him about some of the decision-making. I’m always trying to push him to be better and better and at the end of the game, he stepped up and made plays. He’s an awesome competitor.”

Kochmansky finished 11 for 20 for 328 yards passing and also rushed for 186 yards on 26 carries. In all, the senior threw for three touchdown passes and ran for four more.

In many ways this turned into a showdown between Kochmansky and Sun Valley dynamo Julz Kelly. Both athletes were spectacular on the night. Kelly ran for five touchdowns, had one scoring reception, and also threw a 58-yard touchdown pass to Lance Stone to carry the Sun Valley offense.

“He’s so patient; he’s one of the best high school running backs that I’ve ever seen,” Means said of Kelly.

It was a truly remarkable performance for the Sun Valley senior.

“It was a breathtaking game to play in,” said Kelly, who finished the game with 325 yards on 36 carries, while also hauling in a 43-yards scoring pass and tossing a 58-yard touchdown of his own. “We would go ahead and then they would come back. It was a tough way to lose a game.”

Kelly was on fire early as he had scoring runs of 12, 32, 18, and 42 in the first half, while Kochmansky ran for two scores and passed for two more to leave the game knotted 28-28 at halftime. Kelly was supported by Stone (75 yards receiving), quarterback Anthony Ellis (197 yards passing), and Dayon Belgrave (eight catches for 137 yards).

Kelly and Kochmansky got stronger with thoroughly dominating performances in the second half, but it was Kochmansky’s cool and confident demeanor that eventually led his team to the victory.

“You expect that when you score with 59 seconds left that you’re going to win the game, but it was that kind of game,” said Bernhardt, of Kelly’s 43-yard scoring reception from Ellis that looked like it would be the game-winner before Kochmansky took over. “It’s a shame that anyone had to lose this game.”