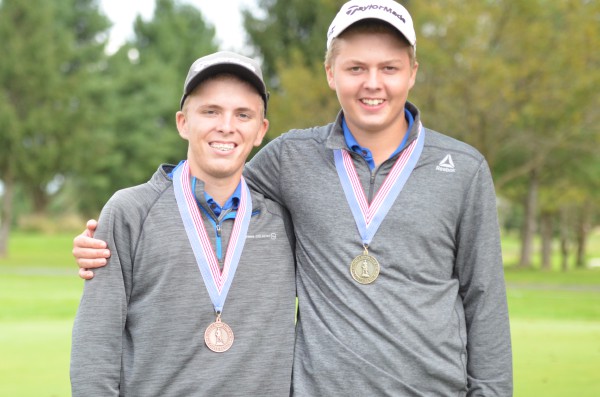 GILBERTSVILLE >> Josh and Caleb Ryan are one another’s biggest supporters.

Whether at home or on the golf course, the brothers are consistently pushing each other to be their best while also bringing out the competitive edge that comes with a sibling rivalry.

“It’s nice to win this, for sure,” said sophomore Josh Ryan, who finished up at 1-under 70 for the day. “I don’t think I missed a single drive today. It was nice. I was picking my targets and then landing them right there.”

On a day where conditions were far from ideal due to rainy weather in the days leading up, Ryan’s distance off the tee made for much more manageable approach shots and putts for his round. He finished out with four birdies and three bogeys while hitting just 29 putts for the round.

His most impressive swing came on the Red Course No. 9 just before the turn. While most play it safe and short of the pond, Ryan crushed his driver off the tee and over the hazard before finishing with his second birdie of the round.

“I scoped it from the tee and it was 270 to carry,” said Ryan of his thought process on the tee at No. 9. “I pulled out the driver and let it fly. It was probably the best ball I could have hit.”

Although he finished just a stroke off his brother’s winning score, senior Caleb Ryan found plenty of solace in his runner-up finish at even-par 71.

“If I’ve got to come in second place, I’d finish behind him, of course,” said Ryan pointing over to his younger brother.

Ryan finished with three birdies and three bogeys while flashing his putter 30 times. He ran into trouble early on the back nine, running consecutive bogeys together on Nos. 12 and 13 before reeling it back in with a birdie on No. 16 and dropping pars the rest of the way.

Though the two Ryans weren’t matched up together in the same group, the brothers noted that it would hardly make much different, especially considering their parents were keeping each other updated throughout the day.

“It doesn’t really matter,” the brothers said together in sync.

And what about the tension in the Ryan household in the days leading up to Monday?

“No, there was none of that,” said Caleb Ryan with a laugh. “We were hanging out last night, playing Xbox.”

The Ryan brothers led the charge of 18 qualifiers for the District 1 Class AAA Championship to be played next month at Turtle Creek Golf Course.

Methacton senior Dylan Lasecki and junior Nick Martin both tied for third place, finishing up at 73. Spring-Ford’s Luke Watson and Owen J. Roberts’ Jack Murray both finished up at 74 while Boyertown’s John Engle fired a 76.

Pope John Paul II dropped from Class AAA to AA, meaning any player who shot under 84 earned an automatic bid to play at districts next month.

NOTE >> Due to more rain in the forecast the Girls Golf PAC Individual Championship was postponed from Tuesday to Wednesday at 8 a.m. at Gilbertsville G.C.