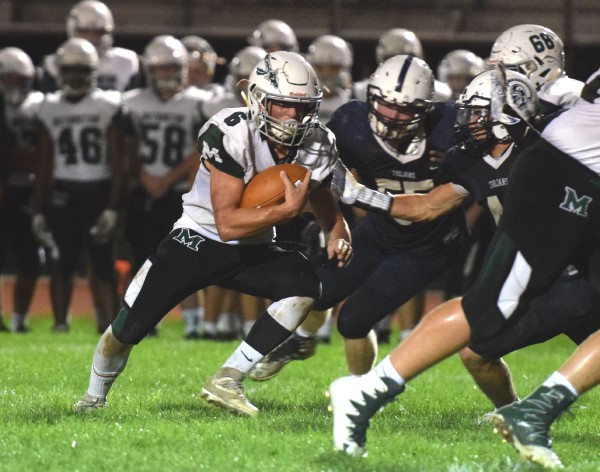 Something happened for the first time in quite a while at Methacton High School on Friday night.

For the first time in nearly two years, members of the Methacton football team didn’t walk off the field with their heads down after the final buzzer sounded.

Instead, the Warriors celebrated in front of a raucous crowd, one that hadn’t had much to cheer about in recent memory.

On the same week that the Cleveland Browns and Tiger Woods both ended their long winning droughts, the Methacton football team was also in on the fun.

The Warriors took advantage of an injury-riddled Boyertown team to claim a 36-7 win on Friday night in both teams’ Pioneer Athletic Conference Liberty Division opener.

Since that afternoon two seasons ago, the Warriors had spent 692 days and played 15 games wondering when that next win may come. During that run, Methacton was outscored 69-559 with nine shutouts against them.

“When we arrived in March, the program certainly was at a point where it needed some TLC (tender love and care), but it was not without a pulse,” said Methacton’s first-year coach Dave Lotier. “One thing I quickly realized was that the players and parents were hungry to turn this thing around.”

Getting to that point, however, was no easy task.

Methacton was shut out in its first three games to start the season, and didn’t register a touchdown until their third drive Friday night against Boyertown.

“It felt good finally getting the ball in the end zone,” said quarterback Dylan Schultz of his 19-yard strike to Larry Dickerson, following the game. “We had been working so hard and came close earlier, but to finally see six points go on the board was huge for us.”

From there, the Warriors dominated the game, out-gaining Boyertown 342-67 in total yards and keeping the Bears off the scoreboard until their final possession once the win was well in-hand.

Methacton’s Andrew Balek (18) intercepts a pass intended for Pottstown’s Nehemiah Figueroa along the sideline in the third quarter of a game earlier this season. (Austin Hertzog – Digital First Media)

Schultz passed for 127 yards and three touchdowns while running backs Michael Ciriello and Mike Torcini flirted with the 100-yard plateau for the game.

Even a few days removed, Lotier gives all the credit where it is due.

“(Going) 692 days between wins is something that can only be ended by a complete team and program effort,” he said. “The players have busted their tails since we got here, the parents have worked behind the scenes to provide meals, team trips and fund-raising for state-of-the-art camera equipment, and the coaches have come together, put in the work and are thriving as a new staff.”

Now as they begin to eye up what lies ahead, Lotier and the Warriors know that they certainly won’t be short on more challenges down the road.

The Warriors will travel to league power Spring-Ford for the Rams’ Homecoming Game next Saturday before hosting two-time defending PAC champion Perkiomen Valley on October 5.

“Moving forward we will continue to preach our motto of, ‘Brick By Brick,’” said Lotier. “While we laid a cornerstone brick on Friday, we still have plenty of building to do to get where we want to go. Each week presents a new challenge in this league and we are excited to see how we stack up against some of the perennial PAC powers.”

Five teams held the opposition to one score or less in this weekend’s matchups around the area.

Pope John Paul II pitched its second shutout of the season with a dominating 40-0 win over Upper Perkiomen, limiting the Tribe to just 138 total yards on the day.

Meanwhile, Pottsgrove, Spring-Ford and Methacton all held the opposition scoreless for the first three quarters before giving up a touchdown once each game was well out of reach.

The Falcons saw Ryan Bodolus rack up another sack while Rylee Howard had an interception. Offensively, running back Isaiah Taylor racked up 215 yards rushing and two TDs as part of the Falcons’ 331-yard game on the ground against Pottstown. Quarterback Jay Sisko finished with 87 total yards and three touchdowns in the win.

Spring-Ford had four interceptions, two by Alex Koretke, others by James Albert and Dylan Ducharme. Quarterback Ryan Engro finished with 228 yards passing and three touchdowns, connecting with Nick Teets for 163 yards and two scores in the win over Norristown.

After a 3-yard rushing touchdown from Marcus Martin to make it a one-point game, Perkiomen Valley scored 26 unanswered points to drop Owen J. Roberts 33-6, the Vikings defense pitching a second-half shutout. It became a turnover-generating machine in the late stages, forcing three turnovers in OJR’s last three possessions, including a Isaiah Domine interception returned for a touchdown. Quarterback Cole Peterlin passed for 216 yards and three touchdowns while Domine and Austin Rowley combined for 11 catches and 193 yards.

Perkiomen Valley’s Austin Rowley (23) and Cole Peterlin (3) congratulate one another after connecting on a long reception in the third quarter against Owen J. Roberts. (Austin Hertzog – Digital First Media)

Phoenixville struck first in its matchup against Upper Merion, with Lance Harris recovering a blocked punt and returning it to the house for 35 yards. But 21-unanswered points and a late field goal from Nick Lindelow sealed the Vikings’ win.

Daniel Boone jumped out to a 35-0 lead by the half against Fleetwood and rode it out to a 42-22 win. Tanner Vanderslice racked up 103 rushing yards and a touchdown while Chase Lacey had 67 yards and three scores.

Daniel Boone’s Chase Lacey busts loose on a carry during the first half of a game against Owen J. Roberts. (Thomas Nash – Digital First Media)

Hill School led Episcopal Academy 21-7 at the half, but faltered in the second half and lost 27-21.

Offensive Player of the Week >>Pottsgrove’s lead running back Isaiah Taylor moved back to the top of the PAC’s rushing leaders list with a stellar performance against Pottstown. The junior carried it 12 times for 215 yards and a pair of touchdowns, including scoring runs of 58 and 55 yards during the first quarter. For the season, he’s upped his season totals to 658 yards and eight touchdowns while averaging 7.7 yards per carry.

Pottsgrove running back Isaiah Taylor (3) looks for running room on a carry during the first half of a game against Glen Mills. (Thomas Nash – Digital First Media)

Defensive Player of the Week >> Spring-Ford senior corner back Alex Koretke picked off a pair of Norristown passes to head a Ram unit that forced four interceptions on the day. Spring-Ford’s defense held Norristown to just over 7.2 yards per passing attempt.

Up Next >> Pope John Paul II and Pottsgrove will meet on Friday night in a battle of Frontier Division unbeatens and the area’s Game of the Week. The Falcons have historically owned the matchup sans PJP’s 18-12 win during the 2016 season. So far this season, Pope John Paul II is averaging a league-best 38.6 points per game while Pottsgrove’s defense is holding the opposition to a league-best 5.6 points against per game with three shutouts. Something will have to give in this one.

Elsewhere in the Frontier, Pottstown and Phoenixville will meet up, both coming off losses in their division openers while Upper Merion will make the trek to Upper Perkiomen.

In the Liberty Division, Owen J. Roberts and Boyertown will both be searching for bounce-back weeks when they meet up Friday night while Perkiomen Valley will look to continue its surge with a game against Norristown. Methacton will head to Spring-Ford for the Rams’ Homecoming game on Saturday.

In Berks Conference League play, Daniel Boone will face Reading on Friday night at the Fightin’ Phils’ FirstEnergy Stadium as part of the Gridiron Classic.

Hill School will travel to Springside-Chestnut Hill on Saturday with the Blues still seeking their first win of the season while Perkiomen School will debut its 8-man football team at home with a matchup against Milbrook School.