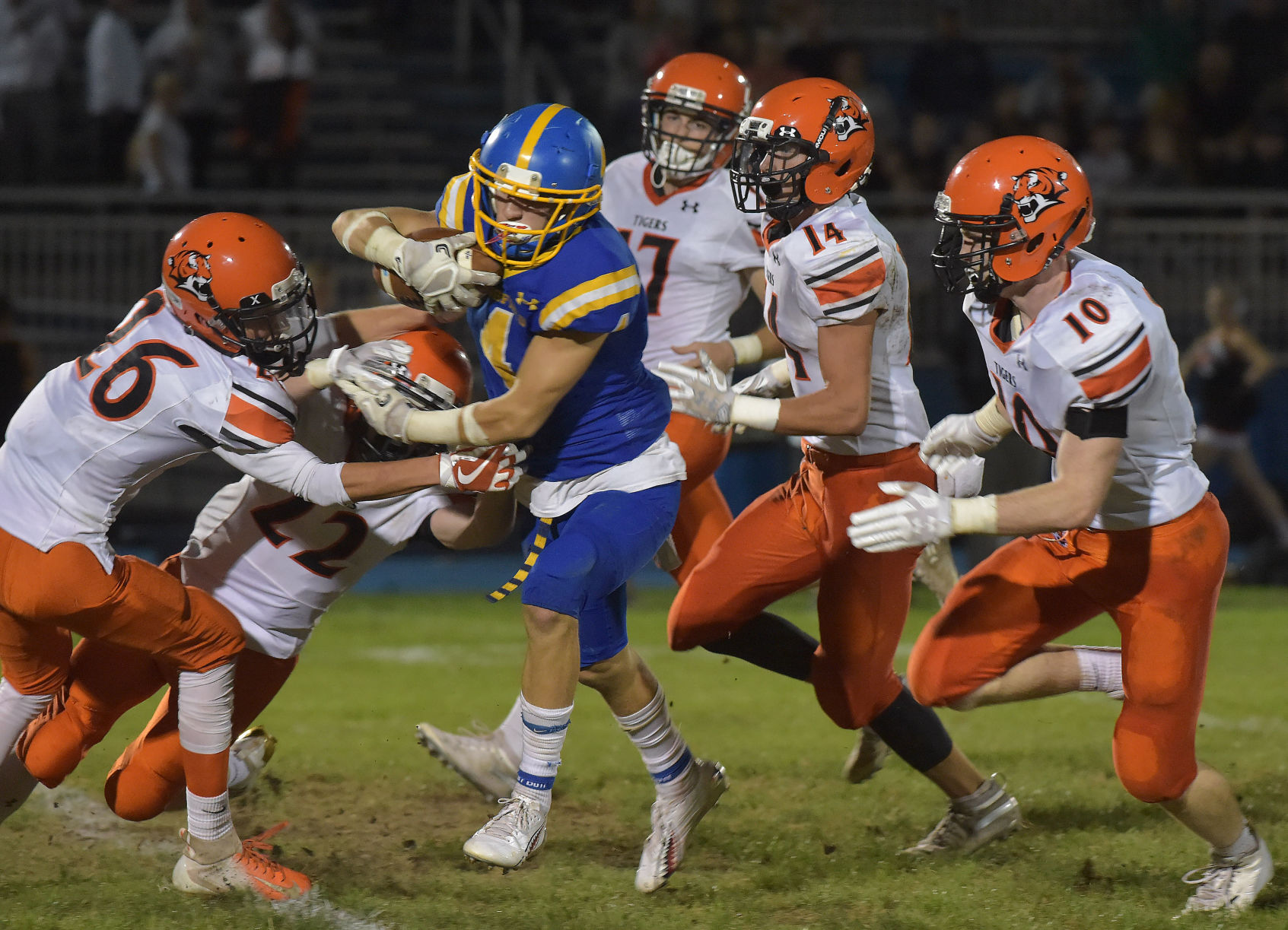 SPRINGFIELD — A second-quarter snap is hardly ever the difference-making moment of a game. Jeff Biancaniello proved that theory wrong Friday night, and with a play he will never forget.

A bouncing ball ended up at Biancaniello’s feet, and the Springfield linebacker wasted no time debating his next course of action.

“I saw that ball and I said, ‘Let me pick this thing up,’” the senior said, laughing. “I was shocked it came right to me.”

The first touchdown of Biancaniello’s career gave Springfield a lead it never surrendered, leading the Cougars past Marple Newtown, 26-7, Friday night and preserving their unblemished overall and Central League records. It also stretched the Cougars’ regular-season winning streak to 16 games, dating to Oct. 21, 2016.

Cougars QB Jack Psenicska finds Liam DiFonzo for a 26-year score, giving Springfield a 26-7 lead at the end of the 3Q. @DelcoSports pic.twitter.com/AfErYioWda

Springfield (5-0, 4-0) benefited from three turnovers forced by its defense, including Biancaniello’s 21-yard fumble recovery for a touchdown in the second quarter and his fourth-quarter interception. “He’s got the best hands on the team, by far,” said fellow Springfield linebacker Patrick Clemens.

Biancaniello’s touchdown snapped a scoreless game and spurred the Cougars to 19 consecutive points. Along the way, junior kicker Brett Barber knocked through two field goals, one going for a career-best 38 yards, and running back Ben Konah rushed for a five-yard score.

Springfield sought this end result. The path by which it arrived at a win, however, was unconventional.

The Cougars could not get their offense on track through the game’s first 15 minutes, managing only three first downs in that time. All the while, Biancaniello and the defense helped Springfield hold serve, stalling out a handful of Marple Newtown’s drives. Aidan Shandley and Andrew Johnson each batted away third-down passes. Sam Bamiteko dropped Tigers quarterback Brian Joslin for a drive-stopping sack, and Johnson brought down Joslin on third down to stymie Marple Newtown’s next series.

“Our guys, they adjust well during the games,” Springfield coach Chris Britton said. “It’s communicating clearly and they carry out the plan, which is the best part. They react. That’s what makes it so adjustable for us.”

With the game still knotted at zeroes, Marple Newtown running back Marlon Weathers lost control of a second-quarter handoff and, after the ball kicked around on the ground for a few seconds, Biancaniello got his hands on it. The senior scooped up the loose ball near the 21-yard line and raced downfield for a touchdown.

That defensive score, with 8:39 left in the second quarter, gave the Cougars a permanent lead.

“(Biancaniello) doesn’t get a lot of recognition because he’s got Clem next to him,” Britton said, “but if you look back at every big play over the last two years, he’s around it.”

Springfield’s Ben Konah scores from 5 yards out, capping a 10-play, 78-hard drive with a TD.

Springfield’s next offensive possession, after Biancaniello’s fumble recovery, proved to be its finest. The Cougars covered 78 yards on 10 plays in a shade more than four minutes, capped by a five-yard rushing touchdown from Konah.

Springfield quarterback Jack Psenicska finished 14-for-22 with 202 yards passing and one touchdown. Konah rushed 11 times for 68 yards, and Frank Bullock led all receivers with six catches for 91 yards.

It wasn’t a convincing performance, at least not until the third quarter. And it wasn’t pretty. But it ended the way it usually does, with a Springfield win.

Marple Newtown gets on the board. QB Brian Joslin keeps it on a read option for an 8-yard score.@MNAthletics cut Springfield’s lead to 19-7, with 2:36 remaining in the 3Q. pic.twitter.com/jruTSpF8OS

The Cougars know they will need a better all-around showing next Friday against Garnet Valley (5-0, 4-0), in a regular-season meeting that could decide the league championship.

“You can’t rep their big bodies, so you scheme against it, and that’s what our practices will look like,” Britton said. “Our scout kids are maybe half their size. We can’t mimic the look; we’ll try to mimic their tells. If you’ve seen their team, there are a lot of dudes we can’t mimic.”

Said Springfield’s Jack Spence, who had an interception against Marple Newtown: “I think we get a good fight every single year. It’s always down to the wire. We have to be hungrier. We know they’re a good team. We have to play hungry; attack the ball, do all of the little things. That’s our best opportunity to beat them.”

Coatesville scores all 55 in first half, rolls over West Chester Henderson
McNeely’s OT goal is the difference for Strath Haven