Defense, Haynes get it done for Upper Dublin against Hatboro-Horsham 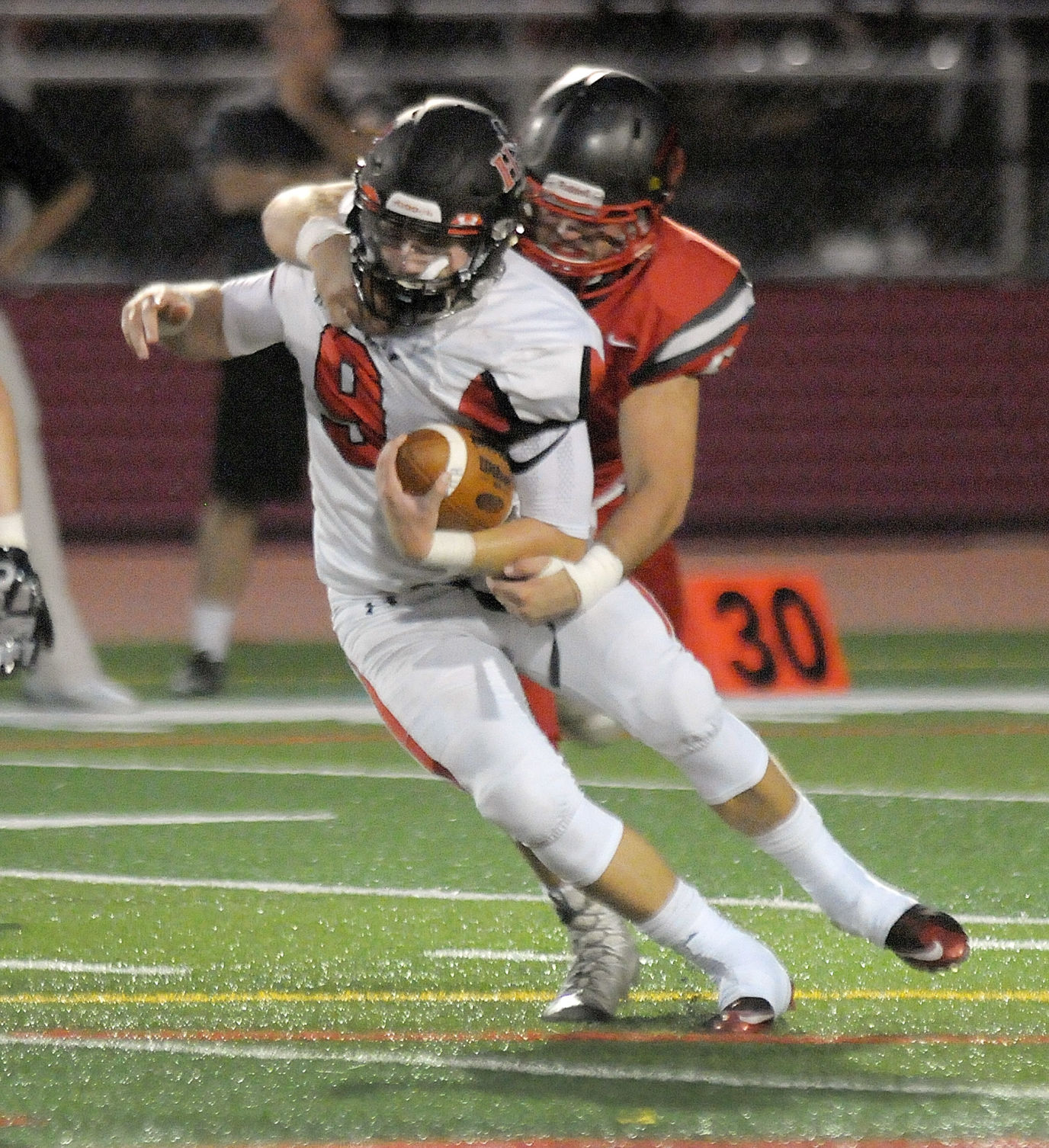 After a bye week, the Upper Dublin football team was getting sick of seeing each other in practice, particularly the defense. Friday night, in their first game under the lights at Cardinal Stadium, the defense got to take that pent up energy out. Mason Novak and Dylan Zlotnikoff met at the quarterback for a sack on the first snap of the game and the tone was set.

“Two weeks off, we were hungry and ready to play,” Stover said. “The kids were dragging a little bit on Tuesday and you start to get a little nervous but they came out focused and fast and played well.”

Upper Dublin quarterback Mike Slivka keeps the ball and run for yardage at game against Hatboro-Horsham during their game on Friday, Sept. 14, 2018. (Gene Walsh/Digital First Media)

It didn’t seem to matter who was under center for Hatboro-Horsham on Friday, they saw a lot of red jerseys. The Cardinals’ pass rush didn’t give any of the three players to take snaps under center much time to throw and despite the Hatters moving the ball well at times, the Hatters couldn’t sustain drives.

Hatboro-Horsham coach Mike Kapusta didn’t feel his line was getting beat over and over, but it was more a summation of one or two minor miscues that allowed Upper Dublin to find its way into the pocket. The Cardinals (3-0, 1-0 conference) finished the game with four sacks and three interceptions as a team.

“I don’t think our guys were getting beat but it was more going the wrong way, or a back going the wrong way or missing a block, things like that,” Kapusta said. “It really hurt us and when you play a good team that’s so sound, those things shine bright.”

Stover credited the Hatters (1-4, 0-1) for coming out with a lot of wrinkles offensively that UD hadn’t seen on film and said it was a testament to Kapusta’s coaching. Hatters starting quarterback Will Riemenschneider was able to do some things well with his legs, but got injured late in the first half and didn’t return to the game.

The game, which featured a lot of clean, hard hits both ways, seemed well-suited for the defensive intensity Upper Dublin brought to the table. Novak, the Cardinals’ nose tackle on defense, added a solo sack in the first half and authored up a couple of the big hits that got the packed UD student section cheering before he punched in a seven-yard touchdown in the fourth quarter to cap his night.

“We’ve been working all week,” Novak, a senior, said. “We were battling their o-line, just pounding and giving everything we’ve got to try and get through.”

Upper Dublin’s first score came on its second drive, which bridged into the second quarter. After finding Haynes for a 14-yard pickup to move the chains on a fourth down, UD quarterback Mike Slivka went right back to the senior wideout on the next play for a 10-yard touchdown.

Haynes, who also plays defense in the secondary, credited his offensive success to the growing bond between him and Slivka, who is in his first year as a starting quarterback.

“He made the right reads and I was in the right position,” Haynes said. “There’s not much to it, just catch the ball and do what I do, which is try to make a play.”

Upper Dublin’s Cody Deussing get run out of bounds after picking up a first down during the Cardinals’ game against Hatboro-Horsham on Friday, Sept. 14, 2018. (Gene Walsh/Digital First Media)

The defense was only getting started and a play after Jacob Rossman recorded a sack, he got right back after the quarterback and forced a hurried, wobbling throw that Jason Scott picked off and ran back 38 yards for a score.

“We were running the ball effectively then we would get ourselves off schedule with our own mental mistakes and it’s been the story of the season so far,” Kapusta said. “With the offense, you can’t get first downs when you put yourself off schedule and it’s been frustrating.”

Slivka and Haynes hooked up again in the second quarter and the play showed off all of the senior’s prowess in the open field. After a big holding penalty and a sack had backed Upper Dublin up to the Hatters’ 49 on a 2nd-and-31, Slivka hit an open Haynes over the middle.

Using a single sharp cut, and a big block from Scott, he went the rest of the way for a 49-yard score and a 20-0 halftime lead.

“I just scan the field, see what’s open and run to green grass,” Haynes said. “There was a lot open on the left side, that’s all I saw and I wanted to take it.”

The teams traded picks in the third quarter, with Cameron Broaddus making a leaping, athletic one-handed grab for the Hatters and Micah Bootman stepping in front of a pass a few plays later.

Haynes completed his hat-trick with 1:52 left in the third on an eight-yard grab from Slivka. The senior, who finished with 88 receiving yards, said Slivka had him the whole way and cited it as another good look by the growing junior signal caller. Stover was happy to see the receiver have such a productive night.

“We got better tonight, which is good and what you want to see as a coach,” Stover said. “He thrives in space and Jason Scott gave that nice block to spring him around the 20. That’s what we’ve talked about with our wideouts, to be unselfish and even if you don’t get the ball, you can still make a play like springing a block to free up a teammate.”

The Hatters’ lone score came when Amir Bookard returned the kick following Haynes’ final score 96 yards for a touchdown. It was the second straight game the Cardinals allowed a kick return touchdown, something Stover said can’t continue to happen if UD wants to contend in the American.

Hatboro-Horsham’s Amir Bookard fights for yardage against a host of Upper Dublin defenders during their game on Friday, Sept. 14, 2018. (Gene Walsh/Digital First Media)

Stover deflected credit for the defense’s effort to coordinator Dave Sowers and the adjustments he made to counter Hatboro-Horsham’s different looks. Through three games, the Cardinals have grown better and are building the trust in each other that’s been a program hallmark.

“All around, we’re doing pretty well,” Novak said. “We try to build off what happened the previous year. We work hard in the offseason and we have great coaches who put us in the right positions every year.”