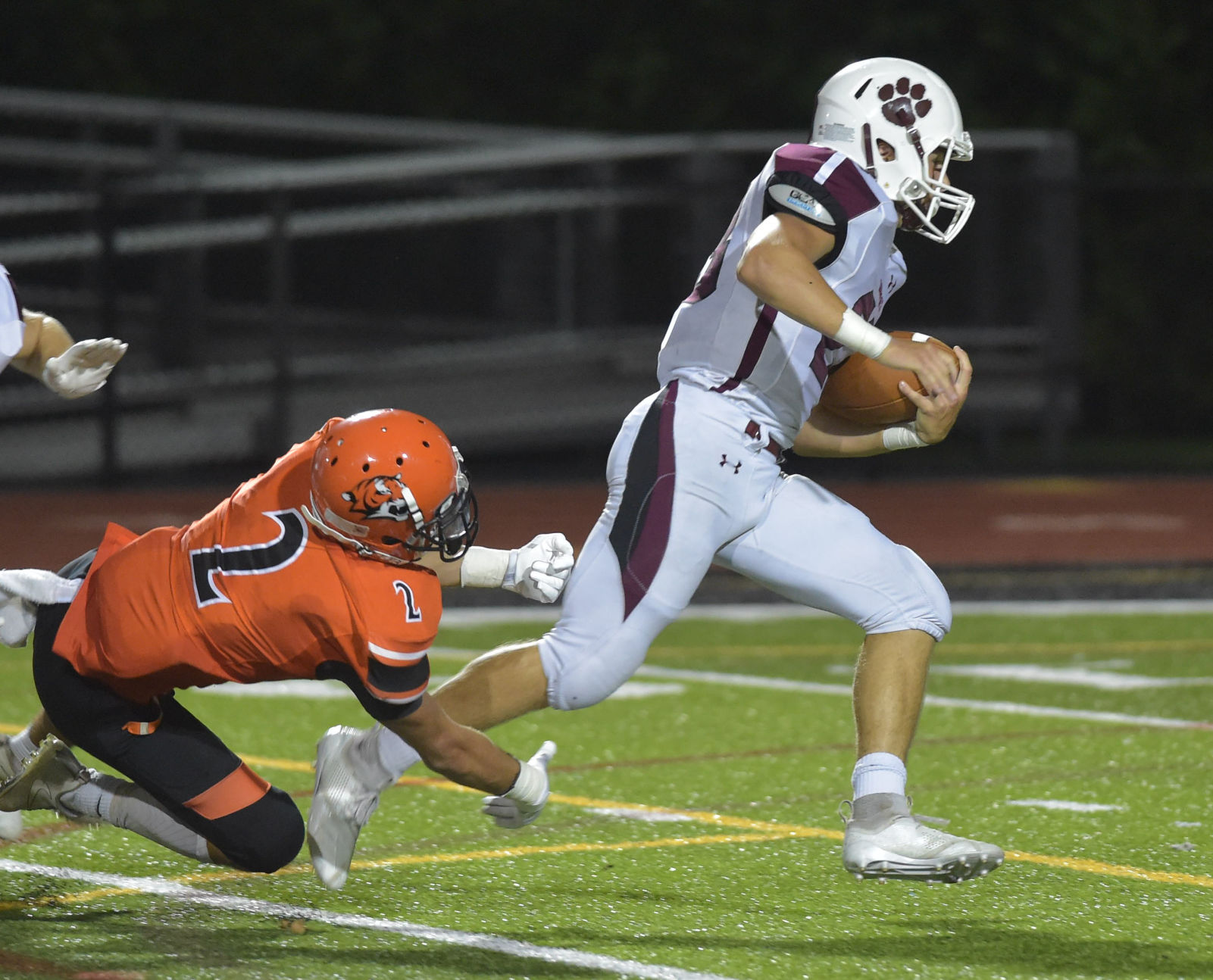 Garnet Valley's Colin Robinson, right, runs out of the tackle of Marple Newtown's Kevin Merrone on the way to a 57-yard touchdown in the second quarter of a 42-14 win Friday. (Pete Bannan/Digital First Media)

But this week in practice, after watching Danny Bradley excel as an outside linebacker the last couple of years and show enough of the explosiveness required for a Garnet Valley back, he wanted to give the senior a shot to carry the rock.

Bradley fits the profile for Garnet Valley’s running-back hydra, with his athleticism, physicality and football sense to read the option attack and exploit holes the Jaguars’ line blasts open.

Garnet Valley running back Danny Bradley tries to cut past the defense of Marple Newtown’s Cameron Leone Friday. Bradley rushed for 91 yards and a score in his first game on offense in the Jaguars’ 42-14 win over Marple. (Digital First Media/Pete Bannan)

Friday night against Marple Newtown, Bradley rewarded that faith, carrying nine times for 91 yards and a touchdown in the Jags’ 42-14 Central League victory over the Tigers.

The commonality with Garnet Valley’s running attack, as always, is the big guys up front. They pushed around the Marple Newtown line to the tune of 367 yards on 58 carries. Those carries were accumulated by nine individuals, and only three of the 57 non-kneel-downs went for negative yardage.

Bradley was the leader but by no means the only one moving in a positive direction. Cole Palis ran nine times for 83 yards, Colin Robinson picked up 52 yards, Dominic LaBricciosa 46 on a day where no individual was heavily taxed. Palis (before limping off with a leg issue), Robinson, Greg Reynolds and Sam Morin joined Bradley in the end zone.

Among the first things Bradley picked up was the offense’s prime post-game talking point, praising those that pave the way for success.

“My o-line made it really easy for me just to jump out there,” Bradley said. “It was awesome being able to run the ball for the first time.”

With that much wealth to spread, it’s about the guys in front. No matter who happens to be behind the line, perennially one of the best in Southeastern Pa. and certainly the premier unit in Delaware County year-in and year-out for the last decade, the assignments in the trenches remains the same. As much as the backs complement each other in style, the bigs up front are singular in their aims.

Danny Bradley with 22 yards on the first drive. Last 3 is a touchdown. 7-0 Garnet. pic.twitter.com/IWyiEdw0RI

“There’s really no difference,” guard George Wiesendanger said. “A bunch of the backs get reps in every practice. And also I played JV with Bradley last year, so I felt confident he was going to get it done. … Me and the whole o-line’s goal is just to destroy everybody off the line.”

They did that often, with backs regularly gaining five yards before first contact. In one instance, the running game’s misdirection was so potent as to fool the umpire into an inadvertent whistle. Just when Marple (2-2, 1-2 Central) attuned to the rush, Palis took the air, hitting Robinson on a 57-yard go route in the second quarter to stake the Jaguars to a 21-7 lead at the break.

Where Garnet Valley (4-0, 3-0 Central) established the rush early and often, Marple couldn’t get out of park. They rushed for 23 yards on 22 carries and saw Marlon Weathers muted to 18 yards on 10 carries, only one tote after halftime with Garnet Valley strangling the time-of-possession battle. Five sacks of Marple Newtown quarterback Brian Joslin (2.5 by Evan Hrvinak) kept Marple from getting going.

“We’ve been practicing with all their plays in scout,” Hrivnak said. “Our scout offense does a great job letting us understand how we have to block them.”

“Our team’s young and Brian’s getting the hang of it,” Weathers said. “He’s picking it up each week and proving why he’s the starting QB. We’ve just got to guide him along the way.”

Colin Robinson in from the 5 (Rory Glackin the seal block). Ran it to my side just for the video’s sake.
28-7 Garnet Valley. 8:48 left 3Q. pic.twitter.com/rGiuKKCyyF

Joslin hit Alden Mathes for a 19-yard touchdown in the first half, a fortunate bounce off intended receiver Jacob Simpson’s hands and into Mathes’ mitts. Mathes tossed the other score, a 68-yard bomb to Colin Ferry on a halfback pass. A second attempt at that play with Kevin Merrone was picked off by Brandon DiCamillo. The game’s only turnover, it helped Garnet Valley grind away the clock.

“It just keeps building the momentum when we can get chunks of yards at a time,” Wiesendanger said. “It gives us the momentum and the energy to keep blowing opponents off the ball every play.”

As for Bradley, could his offensive cameo turn into something more? Bradley has his opinion.

Late interception dooms O’Hara in loss to McDevitt
Defense, Haynes get it done for Upper Dublin against Hatboro-Horsham