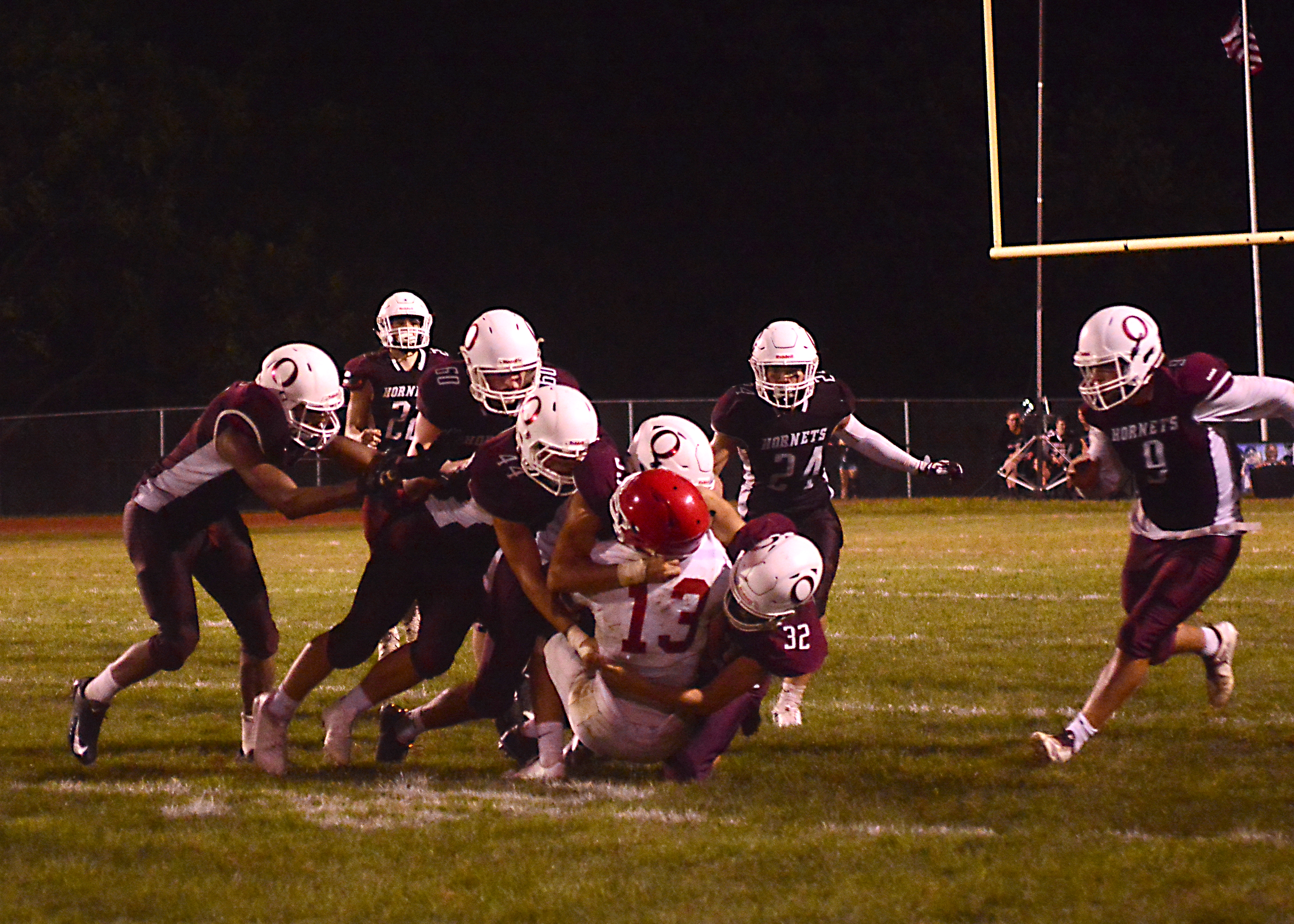 OXFORD—Over the first couple weeks, the Oxford offense was getting a lot of attention as they piled up the points to get the Hornets off to a 2-0 start. Friday night, though, it was the Hornets defense that came up big. After giving up some yards and a couple scores in the first half, the Hornets (3-0) settled in and pitched a shutout the rest of the way, topping visiting Owen J Roberts (2-1) by a score of 28-9

“We knew coming into the season that our offense was young and would have some growing pains,” said Oxford coach Mike Means. “We knew we were going to have to count on our defense while we keep grinding it out on offense. Those kids were flying all over the field today on defense.”

The Wildcats defense came up with a big stop early against a Hornet offense that put up 80 points over its first two games, killing a long drive in the red zone to give its own offense the ball.

“I hope we know we can play with any team we step on the field with,” said Owen J Roberts coach Rich Kolka. “I’m not sure they felt that right away today. We have a good football team. We just have to minimize our mistakes and we’ll be in every football game we play.”

Taking over at its own 29, the Wildcats used play action effectively and drove deep into Oxford territory. But the Hornets came up with a big stop of their own, and Owen J Roberts had to settle for a 26-yard field goal from Hugo Mateos.

The Hornets answered right back with a score on the ensuing possession when Kochmansky busted through the line and ran 46 yards to the end zone.

Then, after forcing a pair of three-and-outs from the Wildcats, the Hornets tacked on another when Kochmansky found Brandon McWilliams for an 11-yard scoring strike.

“We definitely have some playmakers on offense,” said Means. “Tim (Faber) and Brandon (McWilliams) made some nice plays in space, and Bret (Kochmansky) came up with several big plays. We may not have had our best game offensively, but we made the plays when we needed them.”

Trailing 14-3, the Wildcats got right back in the thick of it just before the end of the first half. With Oxford on the move, quarterback Brett Kochmansky took to the air, lofting a pass across midfield, but Samuel Kuhl came up with the interception to give the Wildcats a first and ten at midfield with 2:30 to play.

Helped along by an Oxford pass interference penalty, the Wildcats moved the ball inside the Hornet 20, and capped the drive with an 11-yard TD pass from Cooper Chamberlain (13 for 19, 84 yard, TD, INT) to Savon Davidheiser.

Coming out of the break at halftime, the Wildcats were moving the ball once again,, mixing in short passes with runs from Devan Banos (9 carries, 99 yards), who broke loose with long runs of 38 and 52 yards. But the drive stalled when Alijah Thomas delivered a game-breaker for the Hornets, picking off a Chamberlain pass and returning it 67 yards for the touchdown.

“Our rules for outside linebacker is when we see a pass reaching the tackle, get to 12 yards and expand and go for the ball,” said Thomas. “Once I made the pick, I got great blocks from nate Ferro and Justin Neskie, and knew I had to get it to the end zone. I might not be the fastest outside linebacker in the Ches-Mont, but I was going to score. I do think we have the best defense in the Ches-Mont.”

The rest of the game was all Oxford, with the Hornets tacking on one more score in the fourth when Kochmansky (9 for 14, 167 yard passing, 17 carries 117 yards rushing) connected with Tim Faber for a 42-yard score.

The Hornets improve to 3-0 on the season, but as far as they are concerned, they enter next week’s game at Penn Wood 0-0.

“We have the mentality that we just want to go 1-0 every week,” said Means. “We can be getting ahead of ourselves. It’s another tough opponent next week, so we just have to go in Monday with the mindset that it is a new week, and get prepeared for the team that’s going to be across from us.”