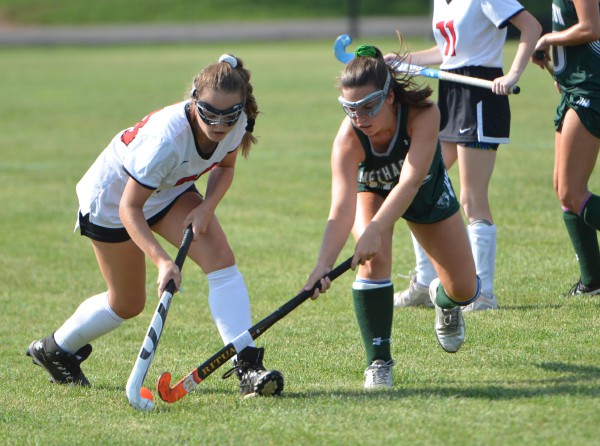 BOYERTOWN >> On a day that featured mandated water breaks and scorching temperatures, it was the Methacton field hockey team that brought the heat at Boyertown High School.

The Warriors used an all-out effort on both ends of the field Wednesday afternoon, picking up a 5-0 win over Boyertown in both team’s Pioneer Athletic Conference Liberty Division opener.

Junior defender Rachel Alderfer scored a pair of goals for Methacton (2-0 overall) while Alexa Kratz finished with a goal and assist. Defensively, the Warriors held Boyertown (0-2 overall) to zero shots on goal. For the game, Methacton held a 15-0 advantage in shots on goal as well as a 10-0 advantage in corner tries. Boyertown didn’t get the ball into the scoring circle until the 16th minute, only to have it quickly turned away by the Warrior defense. That has to be welcome news for Quintois as the team looks to replace its two offensive stars in Emily Owens and Olivia Hoover, both lost to graduation from last year’s PAC championship team.

“It’s been a little nerve-wracking to live up to expectations,” said Alderfer, “but we all play together really well. So our team meshes. We’re hopeful that we’ll do well and we’re confident in our abilities.”

The Warriors certainly experienced their share of both glory and disappointment last fall.

After an undefeated regular season, Methacton captured the PAC Championship with a 3-1 win over two-time defending champ Owen J. Roberts. Less than a week later, though, Methacton’s season came to an abrupt finish. After a first-round bye in the District One Class AAA playoffs, No. 2-seeded Methacton was ousted by No. 15 Central Bucks South with a 2-1 loss that came down to a penalty stroke in overtime.

“It was definitely a reality check that anything can happen,” said Quintois. “Any given day, anything can happen. I’m sure it’s motivation for the returners thinking, ‘We can’t take anything for granted.’ No matter what your record is or who you think you’re playing, it doesn’t matter. We’ve got to play our best everyday.”

Madison Noh misdirected a shot off the stick of Frankie Lucchesi and into the back of the cage two minutes in before Alexa Kratz planted a perfectly-placed aerial to give Methacton a 2-0 lead with five minutes remaining in the first half. The offense kept right in rhythm during the second half with Alderfer netting both her goals in the first 14 minutes before Grace Hirst recovered a rebound and flicked it past to make it 5-0 with 10:47 left in regulation.

Although it certainly hasn’t been the start to the season she would have hoped for, Boyertown head coach Karen Kooker took some positives away from Wednesday’s game.

“I know that this team always comes together,” she said. “That’s why this team stands out to me compared to all of the other years — they really are good teammates to each other and they’re supportive.”

The Bears came into this season looking to replace both their graduated goalkeepers as well as senior Ashley Dierolf, lost for the year due to injury. “We keep fighting no matter what,” she added. “We’ve got people playing all sorts of different positions just to fill in. That says a lot about our team.”

Tough Actin’ Methacton >> Wednesday’s result included, the Warriors have now won their previous 10 matchups against Boyertown with six shutout wins during that stretch. The Bears’ last win over Methacton came in September of the 2013 season, a 2-0 decision.