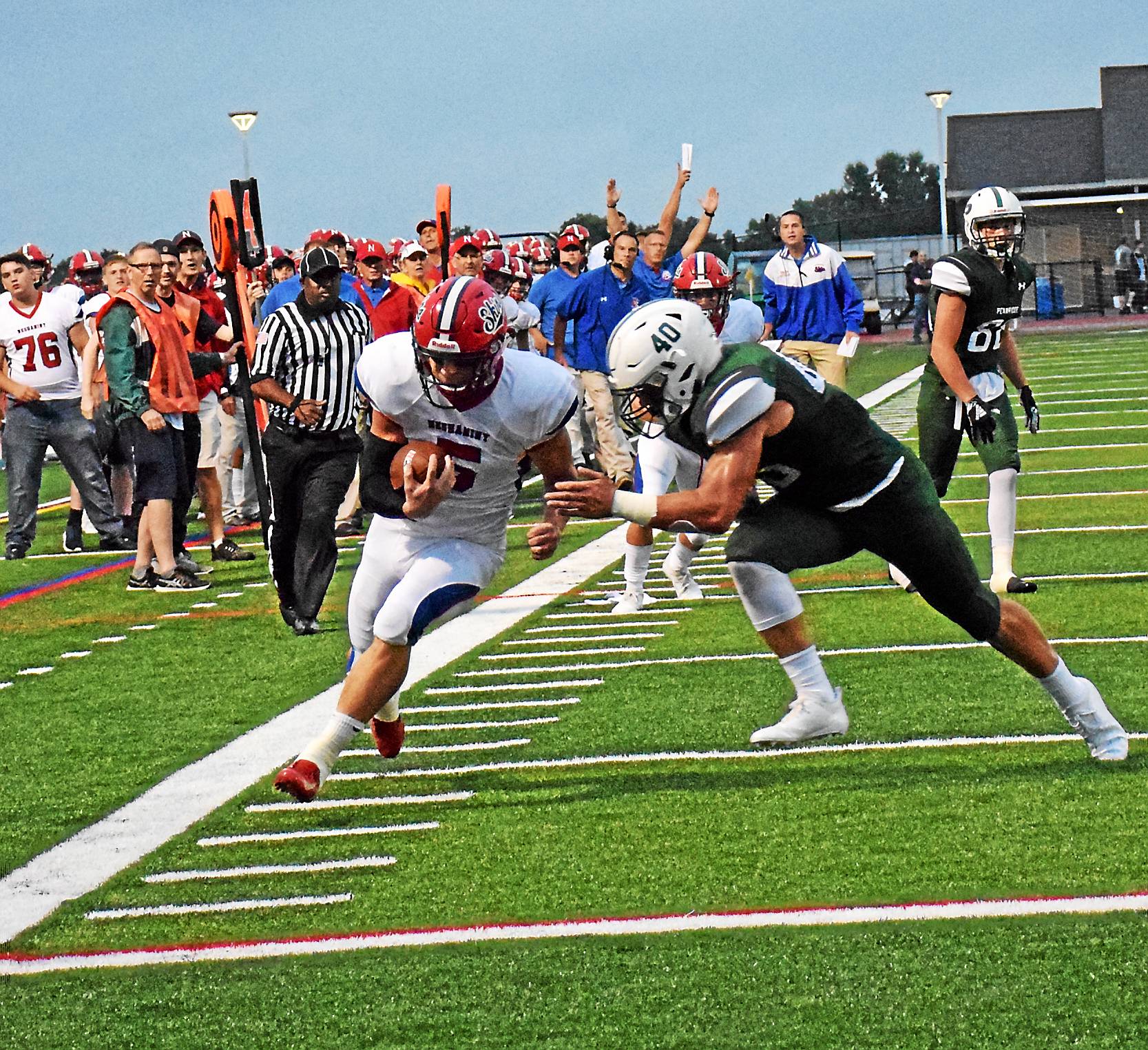 Neshaminy's Oleh Manzyk runs for a touchdown in the first quarter of the Redskins' game against Pennridge on Friday, Aug. 31, 2018. (Debby High/For Digital First Media)

“Definitely that we can fight,” the junior quarterback said. “We were in there with North Penn. We got stopped on the one-yard line and then we came out here with Pennridge and we beat them. So I feel like this is a good test for us in the beginning and as we go on we’ll be a lot better.”

McAndrew threw a pair of touchdown passes and ran for another score while the visiting Redskins stymied a Pennridge offense that posted 51 points in its season opener a week earlier to hold on for a 27-14 victory on a rainy Friday night at Helman Field.

“I thought defensively they played really well,” Pennridge first-year coach Cody Muller said. “I think little things – again little things here and there, whether it’s route running or Zak (Kantor) putting the ball in a little bit better, finding the hole, whatever it is, we talk all the time we can’t beat ourselves.

After trailing 13-2 at halftime, Pennridge (1-1) made it one-score game twice on Kantor to Jonathan Post touchdown passes but Neshaminy (1-1) answered each time to pick up its first win and rebound for a 34-33 double-overtime loss to North Penn.

“Last week was a tough loss. After the game I’m thinking to myself ‘Man, we better get it together quick because we’re going up to Helman Field next week.’” Redskins coach Steve Wilmot said. “I got to give Pennridge a lot of credit. Those guys fought for all four quarters. You know, they have a good football team – they’re going to win some football games this year.

“Coach Muller is doing a really nice job, I think he’s got them on a great track and I’m just happy to get out of here with a win, to tell you the truth.”

The Neshaminy defense intercepted four passes on the night while sophomore running back Chris James collected a game-high 98 yards on 18 carries.

#FOOTBALL: 0:41 2Q @NeshaminySkins 13, @pennridgefb 2. Ian Sheehan with a phenomenal catch for a 14-yard TD from Brody McAndrew, turns around and dives for the ball after it was deflected in the end zone. pic.twitter.com/VcBXNNqNzw

McAndrew went 14-for-27 for 154 passing while on the ground he put the contest away as he plowed into the end zone from four yards out on 4th-and-1 with 58 seconds left for a 27-14 Neshaminy advantage.

“I wasn’t going to stop ‘til until I saw myself past that goal line,” McAndrew said. “I just kept going, going. I feel like that play took a while but I just kept pushing, pushing, trusted my linemen and I got in.”

Kantor paced the Rams with 67 yards on 11 carries and finished 6-for-27 passing for 90 yards, two touchdowns and three interceptions. The 14 points were the fewest for Pennridge since its 23-14 loss to Neshaminy in Week 2 last year.

“I thought our kids battled, I thought we fought hard. I think in the first quarter, we gave up too many opportunities to them. We kind of didn’t play our football,” Muller said. “We’re playing a little bit reckless and backyard style. And we can’t do that. Against a good team, the way they are, you can’t do things like that.”

Both teams are on the road next week. Pennridge visits Perkiomen Valley while Neshaminy is at Downingtown West.

Pennridge’s Joe Muntz works his way downfield during in the second quarter of the Rams’ game against Neshaminy on Friday, Aug. 31, 2018. (Debby High/For Digital First Media)

Neshaminy never trailed after taking a 6-0 lead as Oleh Manzyk finished the game’s opening drive with a 21-yard touchdown run at 7:15 in the first quarter.

Pennridge, meanwhile, turned the ball over downs three times inside Neshaminy territory in the first half. The Rams’ only points before the break came when Shane Hartzell sacked McAndrew for a safety to make it 6-2 ‘Skins at 8:15 in the second quarter.

Neshaminy extended its lead to 13-2 with 41 seconds left in the half when Ian Sheehan came up with a diving grab off a deflection for a 14-yard touchdown pass.

“He’s a great athlete,” said McAndrew of Sheehan. “He’s got some guys in front of him like Cory Joyce who also plays X and when he needed that touchdown he can jump, so we put him in, I threw it up to him and I just trust him.”

Pennridge pulled to within 14-8 on the opening drive of the third quarter as Kantor connected with Post for a nine-yard TD pass at 9:07.

Neshaminy, however, answered on the next series – McAndrew fumbling the snap but corralled the ball, rolled left and found open Joyce for a nine-yard TD strike at 6:35 in the third to cap a seven-play, 71-yard drive.

“I don’t know what it was, it was a pretty good snap, I just dropped it but then I just rolled, I saw Cory and I just hit him,” McAndrew said.

Neshaminy’s drove to the Rams 13 on each of its next two possessions but came up empty on both – the first due to a turnover on downs, the second on a missed 29-yard field goal.

Pennridge proceeded to cut the margin to six with 8:56 remaining in the fourth when Kantor hit Post down the sideline and the 6-foor-5 senior shrugged off a tackle and went to the end zone for a 46-yard touchdown. The missed two-point conversion kept Neshaminy’s lead at 20-14.

The Rams forced a Redskins 3-and-out but could only pick up one first down and punted from their own 45. James began the Neshaminy drive with a 19-yard run and two plays later McAndrew connected with Sheehan down the sideline for a 33-yard completion to the Pennridge 27.

Six plays later, McAndrew scored from four yards out for a 27-13 lead in the final minute