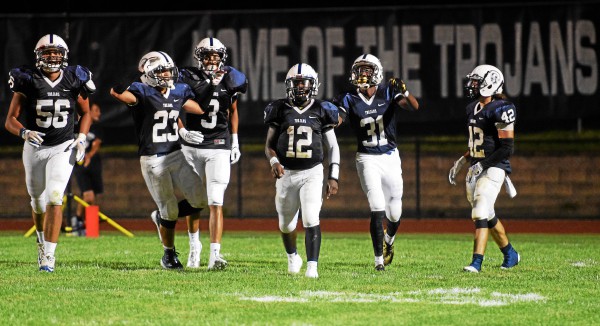 Thursday Night Football moves into the Pioneer Athletic Conference this week with Pottstown headed down to West Chester East High School for a non-conference matchup.

The game is slated for 7 p.m. and will kick off an action-filled Labor Day Weekend around the area.

Phoenixville was originally slated for a game at home against Martin Luther King High School on Thursday, but due to the closing of all School District of Philadelphia schools at 1 p.m., the game has been postponed to Friday night at 7 p.m.

Pottstown is seeking its first 2-0 start since the 2015 season. The Trojans (1-0) are coming off a 26-6 win over Octorara in the season opener last Friday night.

In the win, first-year starting quarterback Josiah Wiggins rushed for 160 yards and three touchdowns to go along with 35 yards and a touchdown through the air.

Defensively, Pottstown held Octorara to just 99 total yards — including a grand total of 0 rushing yards — in the win.

West Chester East (1-0) is coming off a 27-14 win over Council Rock North. The Vikings’ balanced offensive attack should be much more of a challenge for the Trojans, who return 10 starters on defense.

East quarterback Ryan Cassidy completed 12 of his 13 passing attempts last week for 85 yards and a pair of touchdowns. Senior receiver Michael Gray pulled in six receptions for 39 yards and a touchdown.