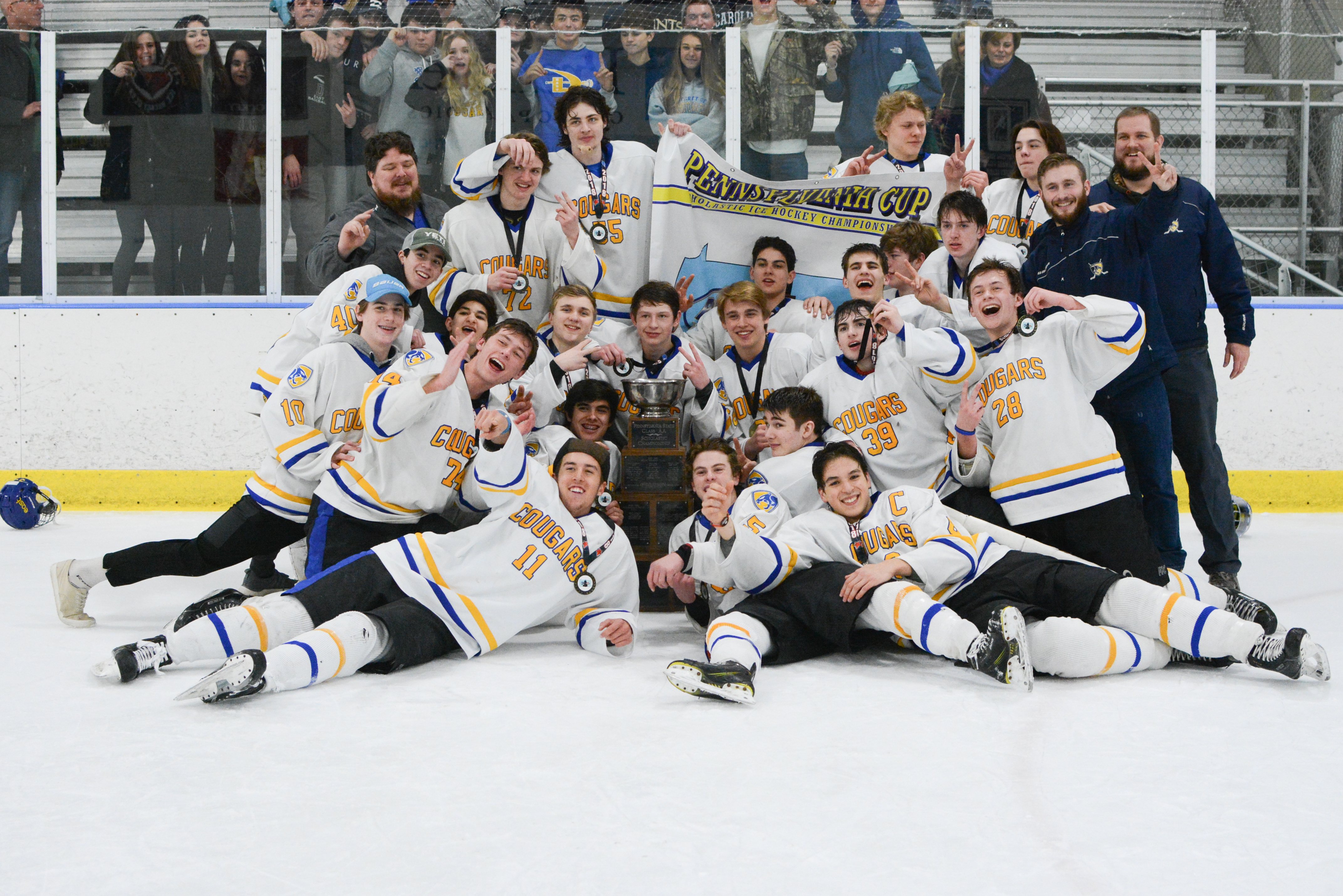 With back-to-back Flyers Cups and two straight state championships in the trophy case at Downingtown East, Monday night’s open tryout for the 2018-19 season would typically have been notable for its battle for roster spots.

Instead, it was most notable for all the skaters who did not suit up.

Multiple sources confirm to the Daily Local News that every returning varsity player for the Downingtown East Ice Hockey Club has decided to sit out the season in protest of the unexpected dismissal of head coach Dave Hendricks earlier this month.

Instead of the roughly 46 players whose names were originally signed up for tryouts, only about 26 showed up Monday night, according to sources. All of them were JV players last season.

Hendricks declined to discuss his feelings surrounding his dismissal but did express his support and appreciation for his former players.

“It is my belief that hockey players should represent their high school and play scholastic ice hockey. I have always supported the players and continue to do so, therefore I cannot in good conscious tell these young men not to fight for what they believe in,” Hendricks said in a statement.

Reached Monday night, Downingtown East board treasurer Matt Milano declined to provide a reason for Hendricks’ dismissal. DEIHC President Bob McNamee did not respond to a request for comment.

While an official reason for Hendricks’ dismissal was not given, nearly half a dozen independent sources confirm there is nothing scandalous or untoward about Hendricks’ behavior as coach.

Hendricks confirmed there is no legal matter that led to or exists from his firing.

Multiple players and their families described Hendricks as a great coach who treated players fairly. Those sources believe the action taken against Hendricks was based on a lack of playing time for JV players and “swing” players, those who go between the varsity and JV squads over the course of the season.

According to treasurer Milano, success led to strife within the club.

“Winning two state championships was both the best thing that happened to the East hockey club and the worst,” Milano said. “The appetite for winning seems to have become insatiable. So much so, that the push to add elite level players from outside the district became so important to some within the group that we lost sight of the fact that the entire purpose of this high school league was to let kids play hockey with their classmates.”

A few weeks after Hendricks’ departure, the remaining members of the board voted to hire Zach Overholtzer as the new coach. Overholtzer is the operations manager at Power Play Rinks in Exton and the Ace coordinator with the Exton Kings club program.

Belinda Vela, mother of varsity player Theo Vela, was a member of the club’s board of directors until quitting in protest after the vote to fire Hendricks last month.

“While I am extremely disappointed in the actions and decisions of the current board, I am very proud of the young men who rallied behind Coach Hendricks,” said Vela.  “They have shown integrity, loyalty, confidence and determination. All qualities that coach Hendricks instills in all his players. Hopefully, the actions of these young men will be enough to save the club.”

Vela said she was so disgusted by the vote that she quit the board on the spot.

The Downingtown East board of directors is made up of parent volunteers. Ice hockey is a club sport not officially connected to or recognized by local high schools or the PIAA.

Dave Hendricks led Downingtown East to another state title and Flyers Cup title last season. He was dismissed in a vote earlier this month by the club’s board that has thrown the team’s future into disarray. (DFM FILE)

Just before Monday night’s tryouts, a 5 p.m. deadline was set for players who wished to not try out and wanted their registration money refunded.

At least 20 players, including all of last year’s returning varsity players, decided Monday to withdraw.

Because of that decision, sources confirm that only two of the seven board members – McNamee and Milano – who were in place during the vote to dismiss Hendricks are “in good standing” with the club, meaning they have sons who play on the team and whose dues are paid.

According to club bylaws, the other board members – including some who reportedly voted to dismiss Hendricks – can no longer serve on the board because their sons have decided not to play this season.

In addition to McNamee and Milano, the DEIHC website lists Chris Tormey (vice president), Christy Saddic-Cosgrove (secretary), Frank Rosati and Dave Stankiewicz as members of the board of directors.

Multiple sources confirm that one board member, who was appointed after last season’s ended, knew that his or her son was not going to play this season before voting to dismiss Hendricks and hire Overholtzer, but continued to serve on the board anyway and take part in the votes.

No other official explanation for Hendricks’ firing was provided by the board. But the “billeting” topic was used as an explanation in a board email to parents sent Monday night and obtained by the Daily Local News.

“We are very sorry to see any player leave the organization for any reason,” the email read. “The events that occurred over the last few weeks were certainly not expected. The board has remained consistent in its opposition to rostering players that do not officially reside within the Downingtown East territory. Additionally, the board does not value winning so much, that it would allow it to come at the expense of the players that are truly East kids. … We certainly respect the decisions made by those that have decided to leave the club and regret that they have made that decision.”

Parents who opposed the August 6 decision to dismiss Hendricks and asked to have a meeting with the board were told that would not happen due to “privacy” reasons. In individual meetings, the “billeting” topic was repeatedly cited as a reason for Hendricks’ dismissal, according to multiple sources.

“We’re all just so consumed by this,” said Dawn Falcone, whose son Ryan Prestayko scored the dramatic game-winning goal in the fifth overtime to clinch the state championship in March. “This is about the kids and it sucks so much out of the boys and it’s made it all about the parents. The stress level of my son is just something you wouldn’t wish on a 16-year-old.”

Tricky Coatesville runs away with win over Harrisburg in opener
HOCKEY: Hendricks reinstated at Downingtown East, board to vacate seats, registration re-opened for all players