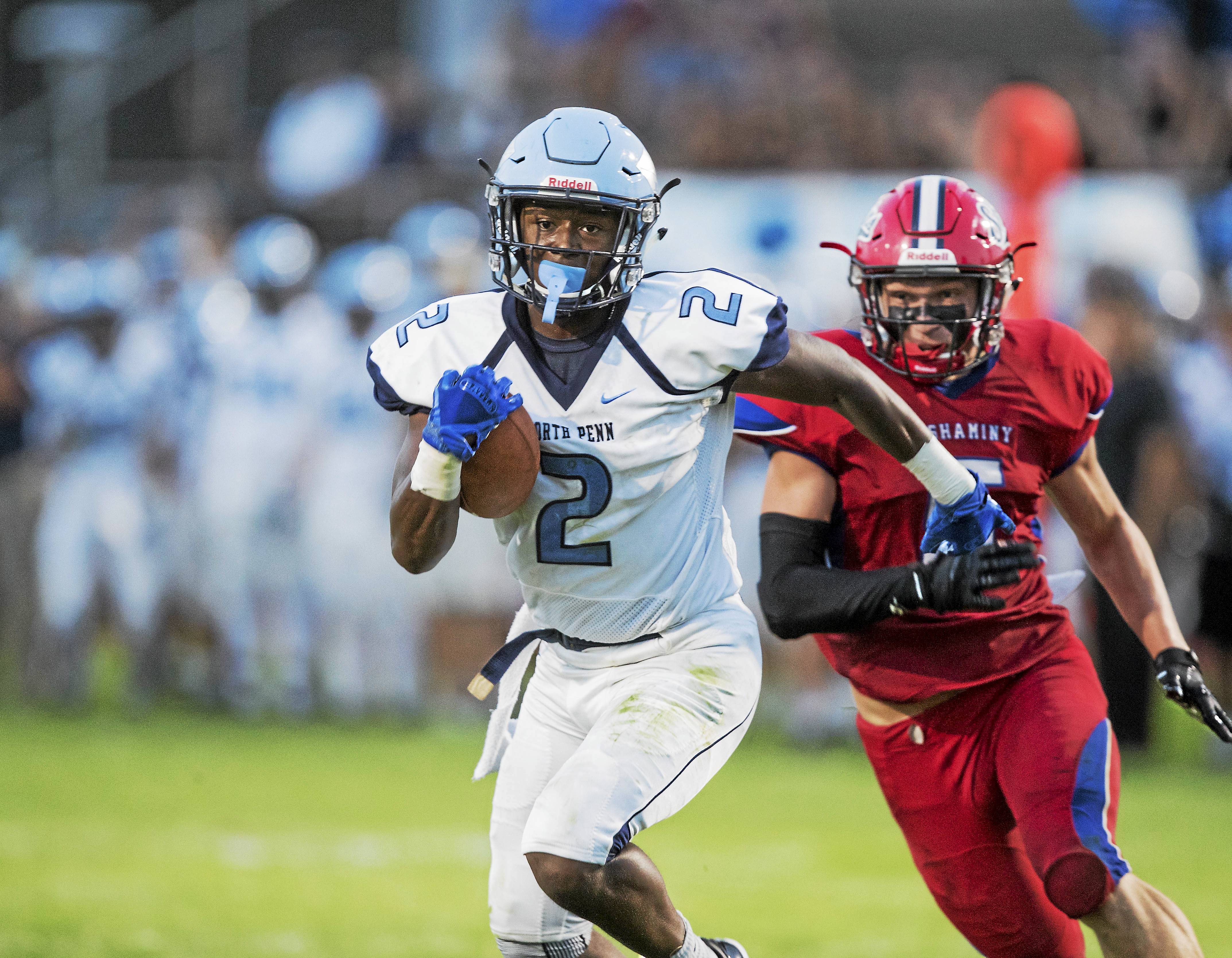 North Penn's Jon Haynes (2) runs for a touchdown after hauling a pass during the second quarter of the Knights' game against Neshaminy on Friday, Aug. 24, 2018. (John Blaine/ For 21st Century Media)

MIDDLETOWN >> Julian White and the North Penn defense were certain the ball was going to Oleh Manzyk.

The only thing in question was whether the Knights could make one stand against Neshaminy’s bruising rusher with the game on the line in double overtime.

White was the one who provided the answer.

“We knew when five (Manzyk) was the in the backfield, we knew what was coming,” the North Penn senior said. “We had double tights and it was either going left or right, so I had to make my move and I went in, spun back out and I made the play.”

After Brody McAndrew’s 10-yard touchdown run pulled the host Redskins to within one in the second extra session Friday night, Neshaminy opted to go for the two-point conversion and the win. But White got the first hit on Manzyk — DJ Fisher providing an assist shortly after – and the run was stuffed decisively short of the goal line, giving the Knights a 34-33 2OT win in a season-opening classic at Harry E. Franks Stadium.

White also ran for 59 yards and three touchdowns on 13 carries, his third TD coming on a five-yard run in the second overtime that gave the Knights (1-0) a 34-27 lead. White was injured on the scoring run but returned to provide the tackle to sealed the win, which North Penn celebrated by jubilantly storming the field.

Friday’s final play was about the only time the Knights could slow down Manzyk. The senior had 146 yards and three touchdowns on 12 carries while defensively creating havoc at linebacker.

“For me, I’ve been here for 24 years, that’s a top-five performance of all-time for me,” said Neshaminy coach Steve Wilmot of Manzyk.

Neshaminy’s Oleh Manzyk (5) runs away from North Penn’s Nate Brown (17) and Jon Haynes for a touchdown during the first quarter of their game on Friday, Aug. 24, 201. (John Blaine/ For Digital First Media)

North Penn appeared to have sown things up in regulation, rallying back from a 19-14 deficit with a pair of White touchdown runs in the fourth quarter to take a 27-19 lead with just 2:07 left in the game.

But starting at the Redskins 31, McAndrew worked Neshaminy down the field and the ‘Skins were at the NP one after McAndrew found Logan Williamson on the sideline for a 26-yard completion. Manzyk ran in for six the next play to make it 27-25 then bulled over the goal line on the two-point conversion, knotting the matchup at 27 with 1:07 remaining.

“When you think about the scheme of things, we got the ball on the five-yard line, there’s two minutes left they don’t have any time outs, maybe I just let the clock run down and then give them their chances from 100 yards,” Beck said. “But you hate to take the aggression from your kids. You score, you go up eight, you think you can play some defense, they got no time outs.

Neither side scored in the first overtime. North Penn forced Neshaminy to turn the ball over on downs the opening possession then with a chance to claim victory the Knights fumbled the ball away on their first play.

North Penn needed just two plays to grab the advantage in the second overtime — White’s five-yard TD run and Ayoub Cherradi’s extra point putting the Knights up 34-27. McAndrew ran for a TD on Neshaminy’s first play but the Skins’ came up short going for two and lost to North Penn for a fourth straight time.

“We battled our way back to get to overtime and, yeah, it’s a tough way to lose,” Wilmot said.

The Knights defense interception McAndrew three times — two by Andy Cole with Kaleem Corbin collecting the other pick. McAndrew finished 8-of-16 for 104 yards and a touchdown.

“Great high school game,” Beck said. “Win or lose both teams are better for it, I think.”

North Penn made it 7-7 at 9:39 in the second quarter as Edwards dashed into the end zone from 43 yards out. After forcing a ‘Skins three-and-out, the Knights went ahead 14-7 as Haynes hauled in a Robinson pass for a 43-yard score at 5:34.

Neshaminy, however, cut the deficit to 14-13 just before halftime — McAndrew finding Bobby Buchys in the end zone for a 12-yard touchdown pass at 43.9 seconds.

The Redskins regained the lead late in the third, Manzyk bursting down the field for a 49-yard touchdown run at 34.4 seconds left in the quarter. An incompletion on the two-point try made it 19-14 Neshaminy.

North Penn, however, answered on its next drive. On a 3rd and 11 from the Neshaminy 49, Haynes got a foot inbounds for a 20-yard catch and six plays later White scored on an 11-yard run at 5:23 in the fourth.  The Knights went for two, but an incomplete pass kept their lead at 20-19.

Cole intercepted McAndrew and set North Penn up the ‘Skins 33. On a 3rd and 13 from the 24, Haynes made another sideline grab — this one for 17 yards to put the ball at the seven. Two players, later, White’s five-yard TD run had the visitors up 27-19 with 2:07 to go.