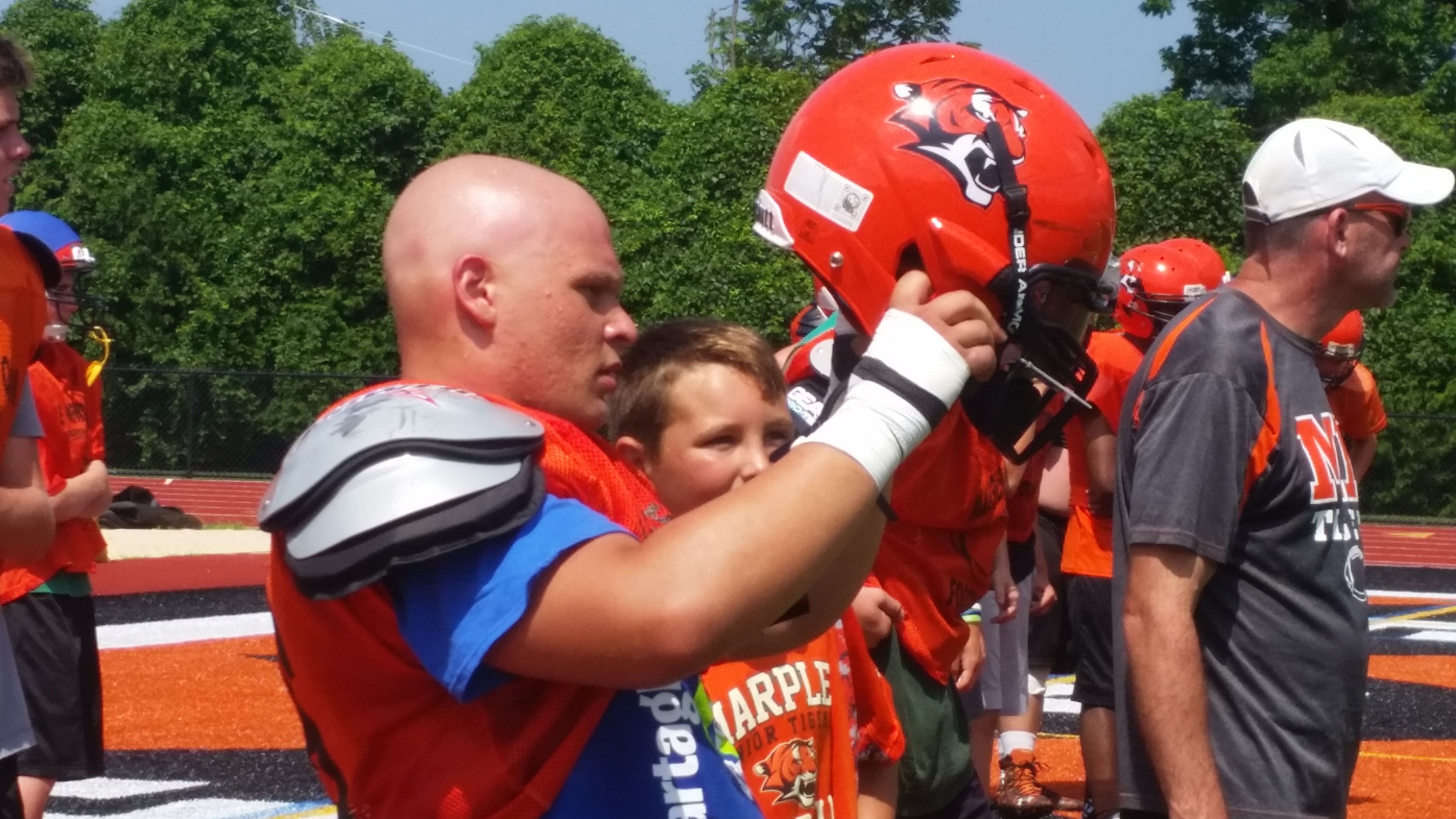 NEWTOWN SQUARE >> The last thing Marple Newtown linebacker Tom Tobin wanted to do was run wind sprints. No football player likes to run them, especially in training camp. The drill is usually done at the end of practice when players are hot, tired and sore.

All they want to do is get out of the sun and relax.

Sprints, though, are a necessary evil, part of the conditioning program designed to have players in peak fitness for the season. So Tobin, a senior, begrudgingly ran along with his teammates. As he did, he looked over and saw teammate Sal Tartaglia Jr. doing crunches on the turf at Harry R. Harvey Field.

Less than four months earlier, Tartaglia was diagnosed with Hodgkin’s lymphoma, a blood-borne cancer that affects the body’s lymphatic system. The 5-10, 222-pound senior guard/linebacker completed his last round of chemotherapy treatments in July and had just been cleared to resume playing football.

Tobin took one look at Tartaglia and run a little harder.

Tobin wasn’t the only one moved by Tartaglia’s work ethic.

Marple Newtown lineman/linebacker Sal Tartaglia looks on during a recent football practice. The senior is back on the field four months after being diagnosed with Hodgkin’s lymphoma and after four rounds of chemotherapy this summer.

“Sal motivates us,” added senior All-Delco running back Marlon Weathers, the leading rusher in the county as a junior. “Seeing one of our brothers go down like that and then overcome it, is really inspirational. We tip our hats to him. We do it for him. Yeah, it’s hot out here, but we’re not going to stop because he’s out there with us, doing everything we’re doing, so why can’t we do it? There are no excuses.”

Tartaglia’s life, and the lives of his teammates, changed forever when Tartaglia noticed what he called a knot on the left side of his neck in April. He’d been working out strenuously in preparation for his senior football season and thought it was just a muscle strain. The knot eventually went away, and Tartaglia didn’t think much of it until a couple of weeks later.

“I woke up one day and it was huge,” Tartaglia said. “I thought maybe it was a swollen gland because I had one in the past year. It came to the point where I would walk down the hall and people would ask me what was going on, and that’s when I decided to get it check out.”

Tartaglia, who turns 18 on Oct. 12, went to see his family doctor, who did blood work, a biopsy and an ultrasound. His physician didn’t pull any punches.

“He said it could be lymphoma, which he thought it was, or it could be a cyst,” Tartaglia said.

On April 21, Tartaglia learned that it was the former. It was devastating news, made even more disheartening when he learned that treatment could take up to seven months.

“The first thing that went through my head was football,” Tartaglia said. “I could have thought about my life or other things, but the first thing I did was count the months before football season. I counted the months on my fingers, I said, ‘November? No way. That’s not happening.’”

Tartaglia was determined to be back in time for training camp, which opened Aug. 6, 14 weeks after the start of four rounds of chemotherapy. The last treatment was July 11.

“In the beginning, it was supposed to be between six and eight rounds of chemo, but the chemo worked magic,” Tartaglia said. “I continued to get scans and the tumor kept shrinking and shrinking. All the numbers were good. I just got really lucky.”

Tartaglia remained positive throughout the ordeal and tried to maintain a sense of normalcy during his treatments. He chose an out-patient setting rather than an in-patient. When he was up to it, Tartaglia hung out with friends, who raised money for the family by crowdfunding and selling #TartagliaTuff merchandise, and worked out as much as possible.

“Something about being in the hospital made me feel like I was more sick than I was,” Tartaglia said. “My mom (Tracie) will tell you. All I wanted to do was get out of there. I felt like when I left the hospital, I was living my life again.”

The chemo did take a toll on his body. Tartaglia shaved his head once he began to lose his hair. And he has some nerve damage in his hands, which he said is improving with medication and physical therapy. Tartaglia knew there would be side effects. One, though, caught him by surprise.

“I expected to lose weight,” he said. “Instead I gained like 20 pounds. They gave me steroids to help me maintain my weight.”

Tartaglia was well enough to join his teammates, but not participate in, Marple Newtown’s three-day team camp at Lebanon Valley College in mid-July, three days after receiving his last treatment. Three weeks later, and a week before training camp opened, Tartaglia was cleared to resume all football-related activities.

“He’s an amazing kid,” Marple Newtown coach Chris Gicking said. “It’s unfortunate that he had to go through what he went through, but what a leader. Just having him at camp with us was an inspiration. And he continues to be an inspiration.

Once cleared to play, the first thing Tartaglia did was contact former teammate Luke Zimmerman, the 2018 Daily Times Baseball Player of the Year, to borrow Zimmerman’s shoulder pads.

“I have shoulder pads, but mine have a little piece of metal that scrapes my shoulder up,” Tartaglia said. “His are brand new. They’re only a year old.”

Zimmerman was only too happy to oblige.

“I’m not using them anymore,” said Zimmerman, who will play baseball at Saint Joseph’s. “He may as well get some use out of them.”

Tartaglia will put the pads to good use. He said he’s about 80 percent of where he was before the ordeal began, but expects to be at 100 percent when the Tigers open the season at home Aug. 24 against KIPP DuBois Collegiate Academy.

“When I heard the words that I was able to play again, my whole mindset on life changed,” Tartaglia said. “I’ve matured a little bit, with football especially. I take it way differently. I know it’s my senior year. I know I have 10 games guaranteed. I’m on everybody, making sure we’re doing everything right and we’re all together.

“I want to make sure the team does the best we can because there are no guarantees. I know. I’m lucky to be here.”