Martin a key voice in PIAA’s summer of change 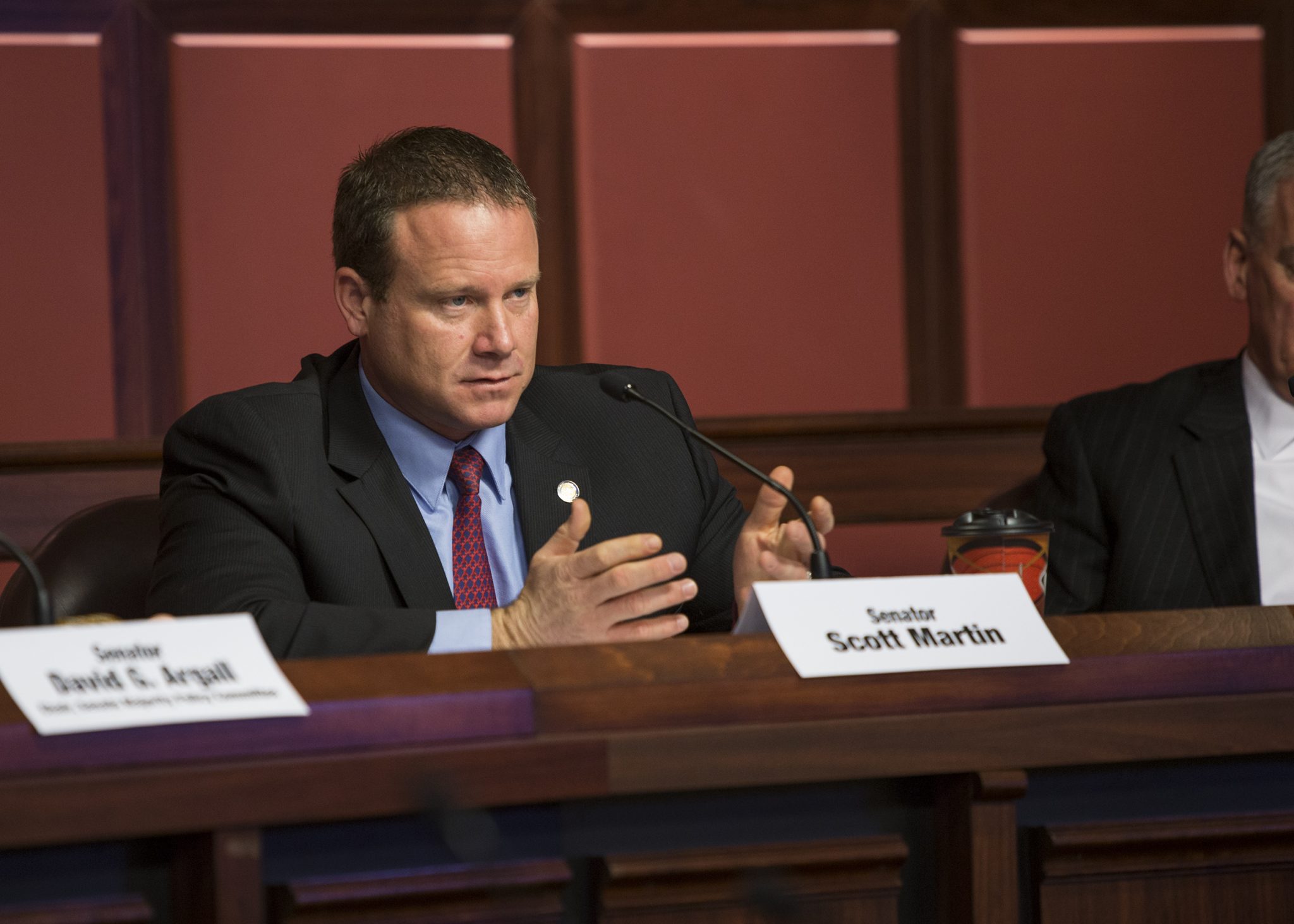 As a one-time private school athlete and a member of the Pennsylvania Athletic Oversight Committee, Senator Scott Martin (R-Lancaster), seen during a legislative hearing in 2017, brings a unique perspective to the ongoing public-private debate. (DFM File)

Scott Martin was a state championship wrestler at Lancaster Catholic. He was an instant standout on the football field at Millersville on the way to two All-American selections and an NFL training camp stint.

But when he returned home from his freshman year of college, none of those accolades prevented him from serving as a church handyman at his alma mater, fulfilling the number of hours needed to pay off grants to attend Lancaster Catholic. As the oldest of seven children to earn a Catholic education, from a blue-collar family as the son of a police officer, Martin understood the need to work for his opportunities.

“When I went through, I didn’t get scholarships,” Martin said by phone recently. “I got loans. I had to work them off, literally. I had to go back after I finished school because I still owed them a certain number of hours and I washed windows over the summer.”

The work ethic plays a part in how Martin, a Republican State Senator in the 13th District serving Lancaster County, ascended to such heights, athletically and professionally. It also sculpts his position on the Pennsylvania Athletic Oversight Committee (PAOC), a six-member body in the General Assembly that guides the PIAA’s operations.

READ: PaPrepLive’s five-part series on competitive balance in the PIAA

In a summer where the PIAA is weighing significant rule changes in an effort to restore competitive balance, Martin’s view as the newest member of the PAOC plays a significant role. He brings a nuanced perspective. Along with longtime committee chair, State Rep. Gene DiGirolamo, R-18 of Bensalem and a Bishop Egan grad, Martin hails from a private-school background. He follows the prevailing sentiment on the committee, and likely within the legislature at large if sampled, that allowing the PIAA to conduct separate championships for public and non-public schools is a non-starter.

“I believe that anyone who talks about separating out public and private, I usually stop the conversation there because I’m not in favor of that,” is how Martin put it.

But in a wide-ranging discussion, Martin didn’t view the current environment around private or so-called “non-boundary” schools as ideal. In a June hearing of the PAOC, he supported measures raised by the PIAA this summer, some already passed and some up for another step of procedural approval next week, as helping to resolve mounting friction.

“I like seeing that interplay between the public and private institutions, but at the same time, I understand what the tensions are,” Martin said. “… I understand that there are issues that need to be resolved. For me, initially when it started off with meetings with the PIAA and the PA Catholic Conference, they were saying that we need to make a change here to make sure we have competitive playing fields.

“We need to devise a system for that keeps the playing field level,” he continued, “and I really believe once I heard what the PIAA was proposing, I really believe that we’re on the right path for that.”

In the spring, the PIAA enacted stricter limits on player movement. It now mandates a 21-day sit-out for in-season transfers and denies eligibility to any transferring athlete who has played at least 50 percent of the maximum number of PIAA regular-season contests in a sport at another program.

On the table next week is a postseason ban for transfers during high school — the exact year is up for debate, having been proposed in June as from the summer after an athlete’s freshman year on. And for the two-year cycle beginning in 2020-21, the PIAA could implement a success factor system, which supplements enrollment as a metric of classification with wins in postseason competition and number of transfers received.

Martin’s corner of the state has a distinct take on competitive balance. Football in District 3 is dominated by private schools like Bishop McDevitt, Lancaster Catholic and Berks Catholic, usually at the expense of all but the largest public schools. Martin’s alma mater is fresh off a girls basketball title, though it’s been a powerhouse in that sport for years. One of the loudest critics of recruiting in football hails from his district, longtime Manheim Central coach Mike Williams, representing an archetype of smaller public schools across the state that are most vehemently agitating for change.

That’s all to say that Martin gets a pretty varied picture from his constituency. But he also brings the athlete’s perspective to the table. He’s seen what he characterizes as “demonizing” of high school athletes for pursuing the best place to showcase their talent, something that is unique to the athletic realm. He also recognizes the hearts and minds challenge of discerning the true motivation behind a transfer. Thinking that you can easily silo transfers as either 100 percent athletically motivated or zero percent athletically motivated is problematic, and he’s wary of transfer guidance that will inadvertently ensnare athletes with legitimate reasons.

His hope is that whatever tack is taken by the PIAA incorporates an understanding that a certain level of transfers is unavoidable. Instead of imposing blanket preventions, the PIAA can establish a system that accounts for transfers in how it frames classifications and tournaments.

“If you devise a system of, OK transfers are going to occur and it’s going to add points and drive you up in classification, then everyone can be aware that these are the rules that everyone is going to play by,” Martin said, specifically referencing the success factor proposal. “It’s nothing but a good thing to have in keeping people on the same playing field.”

Martin endorsed increased transparency in the process, which he thinks can lessen animosity. An idea has been floated about the PIAA operating a database of transfers, with the central office to serve as a clearinghouse for athlete movement, though significant logistical challenges remain before that can be approved by the board and implemented.

But Martin thinks that the PIAA is moving in the right direction, as was the general air of June’s PAOC meeting. As the PAOC is involved in the future — a second meeting will likely be scheduled to discuss the aftermath of the next PIAA board meeting — Martin’s view seems to consider both issues of competitive balance and individual athletes’’ rights.

“I believe that with some tweaks to the system we can capture all those issues there and devise a system that is competitive and respects fact that kids are looking for opportunities on the athletic field and off of it,” Martin said. “And I believe the PIAA plan does that.”