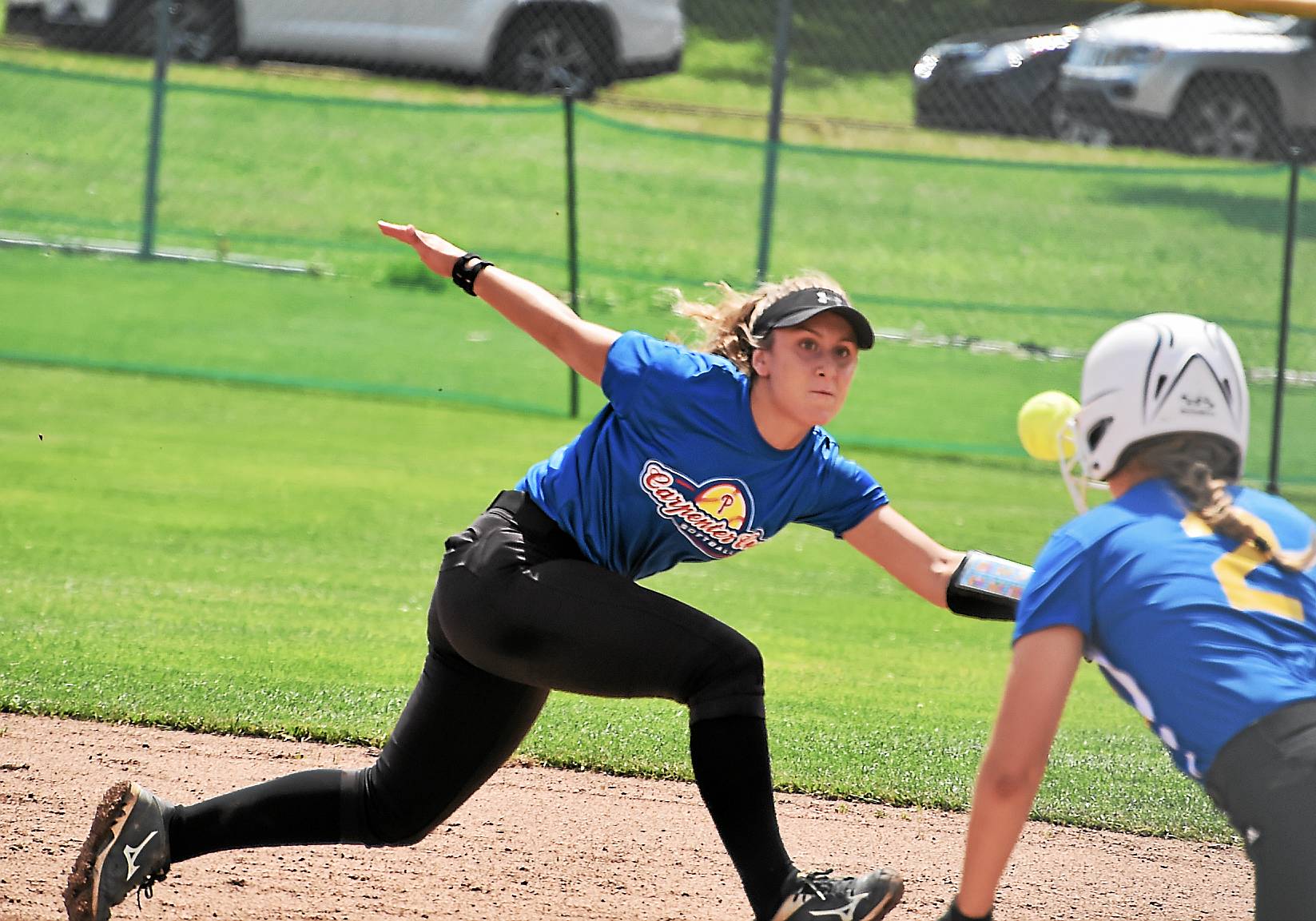 PHILADELPHIA >> Elia Namey knew as soon as the ball rocketed off the end of her bat.

Namey, a rising senior at North Penn had stepped into a big spot in the Suburban One League’s Carpenter Cup softball elimination game against Olympic Colonial on Wednesday and delivered. Namey’s bases-clearing three-run double in the fifth inning was the go-ahead hit in an eventual 12-9 win.

The SOL saw its stay in the Carpenter Cup ended in its next game, a 5-0 loss to Lehigh Valley, but the players on the team got a lot out of their two days and four games in South Philly.

“We got to know each other really well through the games and when we stepped on the field, it felt natural,” Namey said. “It really showed through in that first game and it was just nice to be on a field and be that comfortable with girls you didn’t really know before.”

As a college showcase tournament, the Carpenter Cup inherently puts players in positions they’re not used to and relying on teammates they’ve never shared a field with before. It’s almost impossible to ask for flawless play but a team that can figure things out well enough can find itself doing quite well.

The SOL squad wasn’t perfect in either game Wednesday, but it did a lot of things pretty well. In the win over Olympic Colonial, it was the offense with 12 runs on 12 hits and plenty of clutch performances. In the loss to Lehigh Valley, the team flashed some good defense, with more than a couple excellent plays made by athletes out of their usual positions.

As Central Bucks South outfielder Alexa Ortman, who made a brilliant throw to Upper Moreland’s Brianna “Bean” Hughes for a tag out at home against Lehigh Valley, noted, it was about finding ways to make things work.

“Our cut-offs were causing some problems at first but by the end we made sure everyone was where they needed to be and we weren’t just throwing the ball around,” Ortman said. “You’re going to end up playing with new people at some point, whether it’s college or in travel ball and it helps a lot being able to get used to that and the different styles of coaching.”

Hughes was one of the two-day standouts for the SOL. A rising junior at Upper Moreland, she caught all four games between Tuesday and Wednesday despite not having played catcher in a few years and added some key offensive highlights as well.

While there’s always a drive to win every game, Hughes said there’s a lot more to the Carpenter Cup than a final record. Firstly, it’s a chance to get seen by college coaches, with Widener, Arcadia and Immaculata among the schools putting eyes on the SOL squad Wednesday but also a chance to see and learn from some of the best softball players around.

“Playing other positions, it’s cool to see how people who don’t normally play those positions surprise you,” Hughes said. “I saw this as an opportunity to play with people from other schools and against schools I’ve never seen or heard of, but also knowing all the girls who would be trying out are super skilled and at the same kind of competitive level I am.”

North Penn coach Rick Torresani is an assistant for the SOL squad, so the Knights are always well-represented with Jamie Beer and Victoria Juckniewitz joining Namey on the roster. With CB South third baseman Tara Tumasz also making the roster, Juckniewitz, the Knights’ third baseman, got a chance to do something she’d always wanted to try and played shortstop.

Juckniewitz, who scored three runs and drove in another against Olympic Colonial, said getting put in an uncomfortable or unfamiliar spot is something that can and should help any player grow.

“Throughout our school seasons, we were all consistent hitters so I feel like when you bring us all together, that’s going to show,” Juckniewitz said. “I’ve always wanted to play shortstop and even outfield but third base is where I’ve been most comfortable. I’m always up to practice anywhere I can get it. It’s a different type of throw, but once I got that down, I was ok.”

Both Juckniewitz and Namey said it was a good experience playing with and getting to know CB South’s Tumasz and Ortman, especially after their teams met three times during the spring. For Hughes, who wasn’t quite sure what to expect when she tried out, she found the rest of the players very welcoming and herself picking up a lot of new ways to see or think about the game.

“The girls on this team, we all come from the same league so I’m going to play against some of them in the future,” Hughes said. “It’s cool that I’ll be able to tell my team, ‘watch out for her,’ or ‘back up outfield,’ knowing things about them but also knowing them as people, it’s going to be fun.”

Namey finished the first game 2-for-3 with four RBIs while Tumasz had two hits and a sac fly to drive in three runs. Wissahickon’s Siani Paige-Miller went 3-for-4 out of the No. 9 spot against Olympic Colonial, Hughes drove in a run and scored twice and Plymouth Whitemarsh’s Emma Carney had an RBI single.

“Playing with Tara, it helped me evolve as a player because she throws hard and her throw from third is different than Victoria, so that was good to see and experience,” Namey said. “Alexa in center field, that’s different than anyone I’ve played with and she’s amazing. You get to see all these different types of players and it helps you advance because you can take all the good things each player does.”

On top of her defense, Ortman had a strong day at the plate. The Titans centerfielder went 2-for-5 in the opening game with a triple, two RBI and two runs scored then had half of the team’s six hits against Lehigh Valley in a 3-for-3 effort with two bunt singles and a double.

“My mindset is to go for the first strike I see,” Ortman said. “I like to get ahead, I don’t want to get down in the count. Usually, I’m swinging for whatever’s around what I want my pitch to be.”

The softball Carpenter Cup is only open to sophomores and juniors, so Hughes said she wants to try and come back again next summer. Juckniewitz and Namey had heard plenty of good things from their coaches and teammates who had been on the roster in prior years but still said the experience was better than they thought it would be and Ortman said she’d tell anyone thinking about it to try out.

Upper Dublin head coach Heather Boyer, the SOL head coach, said the event can also give players an view of how important each role is on a team. She noted that every player on the Carpenter Cup roster is a starter and key contributor on their high school team but the nature of the event may ask them to be a pinch-runner or hitter or for pitchers, coming in as a reliever.

In all, Boyer was pleased with how the team did and felt this year’s group bonded well.

“You develop a friendly, competitive relationship with the kids you’re competing against,” Boyer said. “It gives a different perspective and different level of fun to the game, which is important because it’s supposed to be fun.”