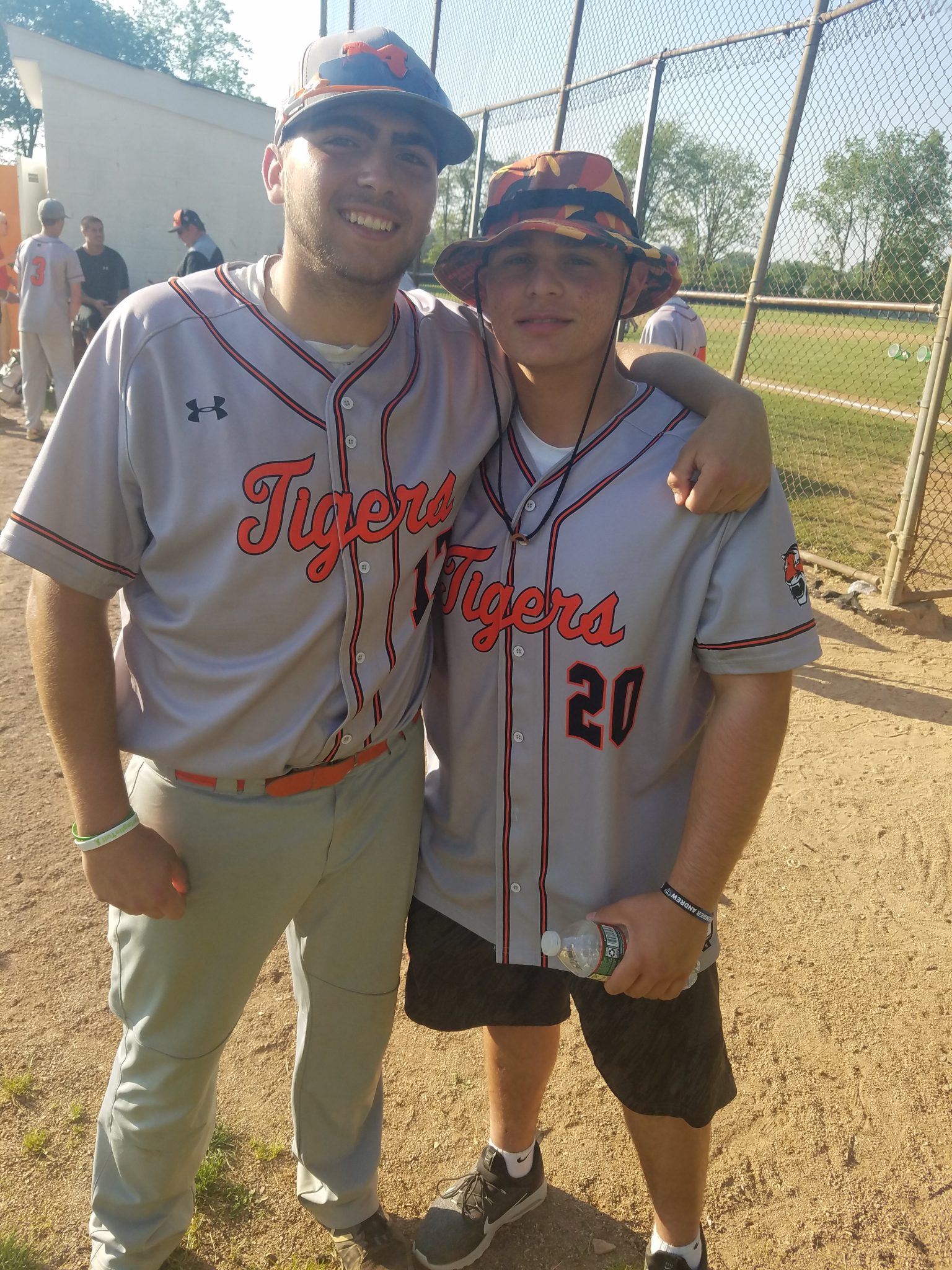 In its quest to become Delaware County’s first baseball team to win a PIAA championship, Marple Newtown hasn’t had to look far for inspiration.

One of the Tigers’ own is in the fight of his life. Sal Tartaglia, a junior, was recently diagnosed with Hodgkin’s Lymphoma.

Tartaglia noticed there was a problem several weeks ago.

“Right in my neck, I felt a lump and it got bigger after a couple of days,” Tartaglia said after watching the Tigers win their final home game of the season in the District 1 Class 5A semifinal round last month. “I thought it was weird at first. Then I saw my doctor, he gave me an ultra-sound and took my bloodwork. It turned out that there were two enlarged lymph nodes. Right off the bat we knew what it was and they were able to get me in CHOP (Children’s Hospital of Philadelphia) right away.”

Tartaglia couldn’t attend a few of the Tigers’ games, including a win in dramatic fashion earlier in the playoffs. He was receiving chemotherapy the day his good buddy and senior Luke Zimmerman smacked a walk-off home run to give the Tigers a thrilling victory 9-8 over Kennett.

“I was watching on GameChanger,” Tartaglia said. “Of course this guy (pointing to Zimmerman) came through. No surprise there.”

Tartaglia is humbled by the outpouring of support from his teammates and the entire Marple Newtown community. Tiger-orange T-shirts and bracelets made in his honor feature the slogan #TartagliaTuff. A GoFundMe page has been created on his behalf.

As Tartaglia continues his battle, the Tigers are two wins away from a state title. They travel to Green Township Park in Chambersburg to play West Allegheny in the semifinal round Monday at 2 p.m.

The Tigers, of course, will play every game with Tartaglia in mind.

“I know it’s a joy for him, coming out here and supporting us. He just loves coming here,” senior catcher Luke Cantwell said. “We love that, too. He is so positive. If he was real sad about it, that would make it hard for us. He’s made it real easy for us and we’re just out here fighting together and playing every game for him.”

Marple Newtown has leaned on its sports teams to help its own through difficult health situations in the past.

“Sal is inspirational. This has unfortunately happened a couple times here at Marple with a football kid, Mike Shelly, and everyone sort of rallied around him and he was a big inspiration to everyone,” Tigers coach Mark Jordan said.

“For a young kid, in the prime of his life, you don’t expect it. He comes out as much as he can and he’s an inspiration to everybody. Seeing him is fantastic.”

The Tigers (23-2), who cruised to a Central League title, bounced back from their loss to West Chester Henderson in the District 1 semifinals with routs of Boys Latin and Mars Area. They have outscored the competition, 18-2, in the first two rounds of states.

Scheduled to toe the slab Monday is junior left-hander Alden Mathes. The Tigers could also throw rightys Sean Standen and Steve Morrison in relief, if necessary. Zimmerman (10-0, 0.72), a Saint Joseph’s University commit, would be on track to start the championship game Thursday at Penn State University after pitching another gem in the Tigers’ 6-1 decision over Mars in the quarterfinals last week.

West Allegheny, District 7’s third-place finisher, has a penchant for comeback wins and two-out rallies. The Indians (17-2) stormed back from a three-run deficit to claim a 7-4 victory over Red Land in the quarterfinals. Trey Zeroski is a slick-fielding senior shortstop with speed and power.

In another PIAA Class 5A semifinal:

The Patriots (21-5) got spectacular starting pitching from Alex Cornell and clutch hitting from Tyler Kehoe in their 7-2 shellacking of Cedar Cliff in the quarterfinals. Cornell pitched into the seventh inning, allowing four hits while striking out seven. Kehoe had the biggest hit of the game, a bases-clearing double in the second inning. Third baseman Max Hitman and catcher Cole Chesnet also came through with key RBI hits for the District 12 champions.

Jake Kelchner is slated to take the mound for the Patriots against Lower Dauphin, District 3’s third-place squad. Kelchner, a hard-throwing left-hander, has a 0.89 ERA and 15.2 K/9. The Catholic League’s Pitcher of the Year is bound for Alabama.

Derek Wyld’s run-scoring double in the seventh inning gave Lower Dauphin a 1-0 win over North Pocono in the quarterfinals. The Falcons are in the PIAA playoffs for the first time in five seasons.