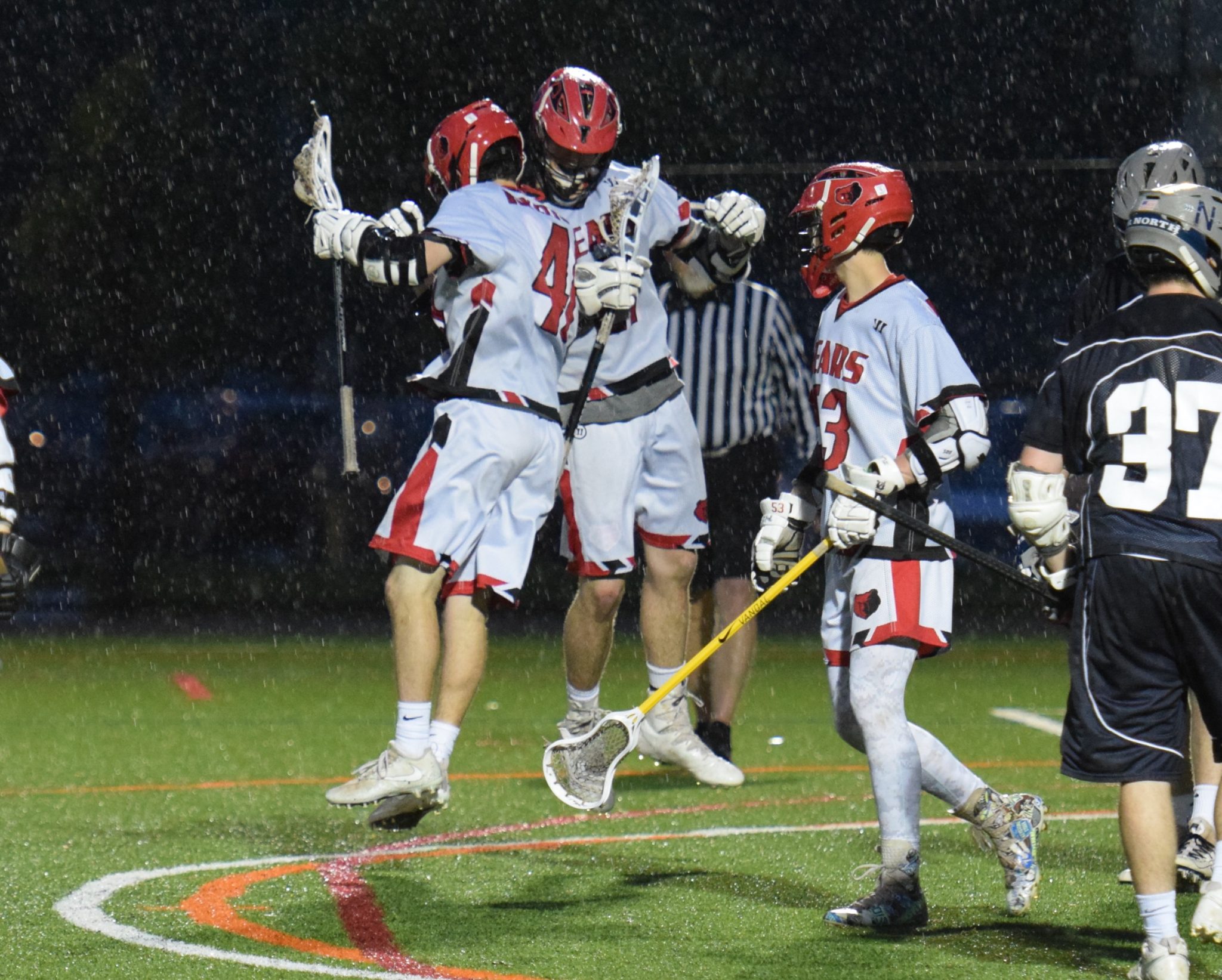 Wednesday night at Pottsgrove, the Bears made their biggest news yet – winning a district playoff game.

Boyertown, the No. 13 seed, used a dominant first half and staved off a resilient Council Rock North effort in the second half to win 9-6 for the Bears’ first-ever district victory.

Boyertown’s Mike Federico flies through the crease after having his shot stopped by Council Rock North goalie Robbie Kay in a District 1-3A playoff game Wednesday at Pottsgrove. (Austin Hertzog – Digital First Media)

Improved results with quality opponents – they hung well with Pioneer Athletic Conference champion Spring-Ford in the league semifinals, a 10-7 loss – turned the Bears into believers they could be the first to clear a new hurdle.

“We didn’t necessarily expect it to be like this,” Moccia said. “A district game was big news for the team of 2014, which was the last time we were pretty good. We played Springfield-Delco and that was a big deal. Coming into this year, we weren’t thinking ‘Oh, we can pull this off,’ but we did. We had a lot of new players come in but we’ve really meshed.”

“We thought we were going to make a better PAC run, but this is awesome. This has never been done in Boyertown history and we got it done.”

No. 20 Council Rock North finished the season 9-10 while acquitting itself much better than in the regular-season meeting (18-3 loss on April 30) with the Bears. CR North was led by two goals apiece from Peter Lehman and Luke Walstrum.

Boyertown now makes the quick turnaround to face perennial powerhouse Conestoga (No. 4) on the Pioneers’ home turf Thursday at 4 p.m.

Boyertown led 8-1 at halftime, really getting going late in the second quarter with four goals in the final four minutes – Federico finishing a scramble 10 seconds before Wallace scored directly off the faceoff that keyed Turner’s strike from range and Federico’s hat trick goal with 32.2 left in the half.

“I thought Nick Moccia and AJ Robinson were dodging well and we were finishing our looks,” Boyertown second-year coach Grady Wise said of the first half performance. “In the first half we were clearing the ball well, doing well on faceoffs and got a couple in transition.”

The Indians made a game of it in the third quarter with three unanswered including a buzzer-beater from Lehman on a feed from goalie Robbie Kay.

Hellreigel stemmed the tide early in the fourth quarter by scooping a rebound for a quick goal before goalie Cole Metzger (12 saves) and the Bears hung on down the stretch.

“It wasn’t pretty, but we got our win and that’s all that matters,” Wise said. “I’m really proud of these guys because this (a district playoff win) is a goal we set in the beginning of the year.

“You have to give Council Rock North a lot of credit, they were super feisty and played a great second half. I’m proud of our guys for hanging on and playing a first half that put us in position to win the game.”

Brock boosts Perkiomen Valley to District 1-3A win over Neshaminy, 16-6
Harding’s prognosis for herself and Penncrest: Full speed ahead