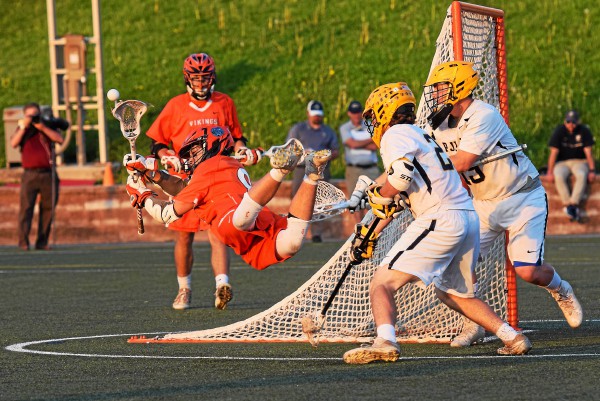 BUCKTOWN >> Over the past several years, Spring-Ford vs. Perkiomen Valley has grown into the signature athletic rivalry in the Pioneer Athletic Conference.

The Rams and Vikings have locked horns in high-stakes tilts in basketball (boys and girls), football, and softball, just to name a few.

Spring-Ford used repeated scoring runs and a stingy fourth-quarter defense to get past Boyertown, 10-7, Tuesday afternoon in the first PAC semifinal at Owen J. Roberts High School. The win advanced the Rams into Thursday’s title game at Methacton, where they’ll attempt to claim a remarkable eighth consecutive PAC crown.

It won’t come easy, as they’ll face a Perkiomen Valley team coming in on a six-game winning streak, the latest coming in Tuesday’s nightcap, where the Vikings avenged a regular-season loss to Pope John Paul II with a convincing 12-3 victory.

The championship matchup features the two squads that put on what was arguably the best game of the PAC regular season, an April 23 encounter where Spring-Ford rallied from a 4-0 deficit to best visiting PV, 7-6 at Coach McNelly Stadium in Royersford.

Spring-Ford (14-4) survived the first semifinal on the backs of Peyton Gensler (three goals), Jarrod Marenger (two goals, two assists) and a defense that withstood several Boyertown comebacks to hold the Bears scoreless for the last 16 minutes of the game.

The Rams came flying out of the starting blocks in the opener, dominating possession early and ultimately being rewarded with goals from Jarrod Marenger and Peyton Gensler. Brady McFalls responded for the Bears with a pair of goals less than a minute apart to draw even after one quarter.

After another quick exchange of goals to start the second, Spring-Ford opened up a lead with a quick three-goal run. Marenger set up Gavin Hale and Ryan Rosenblum less than two minutes apart, then completed the run with his second goal at 5:47. Boyertown’s McFalls completed his hat trick 1:19 before halftime to bring the Bears with 6-4 at the break.

A run-and-gun third quarter featured ample highlights for both sides, as Christian Hellriegel and Mason Turner knotted the game for the Bears at 6-all. Spring-Ford responded with another three-goal run, capped by Brad Hart’s behind-the-back finish at 4:34. Hellriegel’s second of the quarter narrowed the gap, but the Rams took a two-goal edge into the final stanza.

“We’ve got the right group for it,” said Spring-Ford coach Kevin Donnelly. “We talk about teamwork, perseverance — and we bond together. They enjoy playing together, and that makes the difference on the field.”

Boyertown saw its PAC campaign come to an end at a record of 10-7. McFalls had three goals and two assists to lead the Bears, while senior goalie Cole Metzger made 13 saves in the contest.

While disappointed, Boyertown coach Grady Wise acknowledges the rampant improvement from his squad since the two teams met in the regular season (a 7-0 Spring-Ford victory.)

The Bears have a nonleague tilt with Downingtown West later this week before the start of 3A districts in a week.

“Our goals this year were to compete for a PAC title, but also to play deep into May,” said Wise. “So after tonight, we’ll need to quickly shift our focus.”

Perkiomen Valley took the mystery out of the nightcap early, tallying seven first-quarter goals and racing out to an early 7-1 lead. Max Nice scored the game’s first two goals within the first 49 seconds, the first of which was set up by Brian Fehr’s 100th career assist. It was the latest accomplishment in a big week for Fehr, who became the first Viking to amass 100 career goals in Saturday’s win over Penncrest.

oreless in the second quarter, but a strong first-half showing from PV goalie Rob Farrington (eight saves) sent the Vikings into the break with a 7-2 advantage.

Both sides killed off extended extra-man opportunities in the third quarter before Nick Steele ended the PV drought at 5:07 to make it 8-2 Vikings. Seconds later, Connor Roop’s third of the evening made the margin 9-2, and the Vikings were well on their way to Thursday night’s showdown.

Roop’s three goals led the PV attack, while Nice, Steele, and Rich Marshall added a pair of tallies each. Fehr finished the night with a goal and five assists, while Farrington had 10 total saves.

“This is the part of the season where you want to play your best lacrosse,” said PV head coach Bryan Churchey. “We wanted to play PJP again — because we knew that first meeting wasn’t our best lacrosse.

“Now we have an opportunity that most people though we wouldn’t, after graduating eight starters last year.”

Justin Kent scored twice for PJP, who ended the regular season at a 12-4 mark—a breakthrough season for the young program, who stands poised to host a first-round game in the 2A District tournament next week.

For the Vikings, their six-game winning streak has pushed the team into a position to not only host a first-round 3A District game, but possibly receive a bye as a top-8 finisher. Those details can wait for another day, however — there’s a more pressing matter facing the Vikings in less than 48 hours.

“Kevin (Donnelly) and Spring-Ford have a great program. They’re very consistent—we strive to reach that level of consistency ourselves. They’re well coached, they’re athletic… but this is a rivalry. We (Perk Valley) always want to beat Spring-Ford, and vice versa. It’s a great opportunity, and it’ll be a great challenge.”