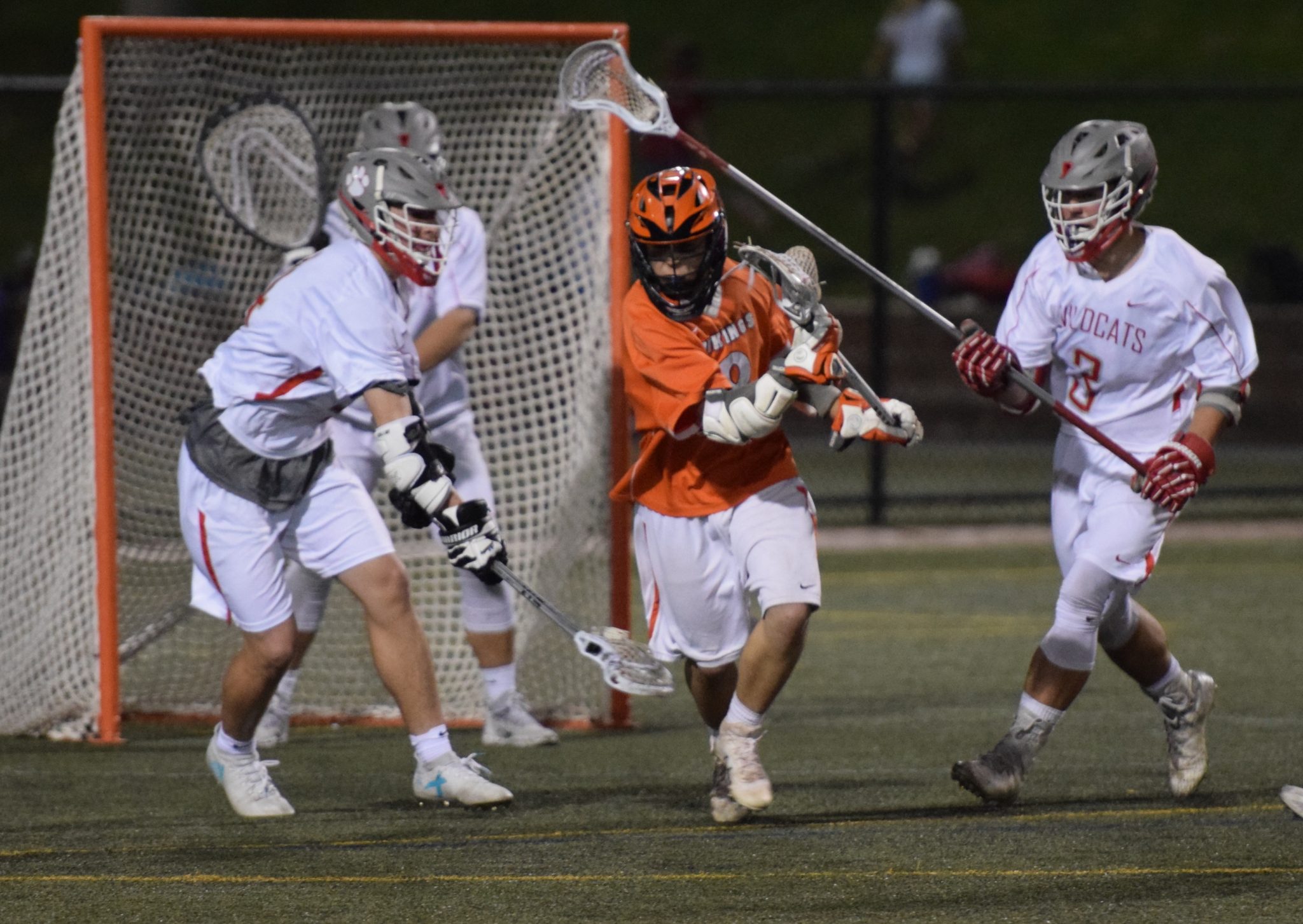 BUCKTOWN >> For years, the Perkiomen Valley lacrosse team had worked for an opportunity to break through against Owen J. Roberts.

The Wildcats eliminated the Vikings from the Pioneer Athletic Conference playoffs in the previous three seasons, and stood poised to ruin another PAC campaign for Perk Valley Thursday on their senior night.

But this time, the Vikings had other ideas. Brian Fehr scored three goals and Rich Marshall added a pair as Perkiomen Valley broke a years-long drought, topping OJR 9-7 and qualifying for next Tuesday’s PAC semifinals, to be played right back at Owen J. Roberts.

The Vikings swarmed the field at the final buzzer, celebrating the victory (and playoff berth) with winning goalie Rob Farrington (8 saves).

“I’m a PV alum, so I’m extremely passionate about Perkiomen Valley lacrosse,” said head coach Bryan Churchey. “The last time (Perkiomen Valley) won on this field was April 17, 2007.”
Churchey was an 18-year-old senior on that team. Eleven years later, he oversaw the program’s conquering of a decade-plus worth of heartbreak.

“We’ve been on the wrong end so many times here,” he said, “and we knew this game would be about mental toughness. I’m proud of our guys, because we did make some mistakes — and in the past, that’s led to more mistakes.

“But tonight, these guys bucked the trend.”

Perkiomen Valley (10-5, 7-2 PAC) will join Spring-Ford, Boyertown, and Pope John Paul II in Tuesday’s semifinals at OJR, with the Thursday championship game scheduled for Methacton.
Playing their third game in as many days, the Vikings nevertheless were prepared for OJR’s offense, holding the hosts to four goals in the first three quarters and building a lead that they were able to hold despite a late Wildcats rally.

“These guys put in the work,” said Churchey. “They were physically prepared, they watched film — they did all the prep you’d expect of a professional athlete this week.”

Shane Beitel got OJR started on the right foot just a minute into the game off a feed from senior captain Joey Tordone, but PV quickly responded with three straight tallies by the 5:24 mark. Tordone broke the run off a scramble in front of the crease at 3:38, but Fehr’s second of the opening stanza gave PV a 4-2 lead after one quarter.

The Wildcats controlled the possession for the majority of the second quarter, working the ball around the box for the perfect shot. However, PV goalie Farrington minimized the damage with three big saves, including a stop on OJR’s Mick Kilgallon as time expired. The teams exchanged goals in the quarter, and PV went into the break with a two-goal lead.

Perk Valley set the pace quickly in the third quarter on a great hustle play from Nick Pammer. As OJR gained possession near the sideline, Pammer announced his presence with a swift stick check, before carrying the ball the length of the field and dishing to Connor Roop, who quickly found Rich Marshall for his second of the night.

Fehr’s third tally was quickly followed by Matt Brock taking a faceoff win the distance, putting the Vikings ahead 8-3. Cooper Chamberlain got one back for the Wildcats, but PV went to the final period with a four-goal advantage.

Tordone totaled three goals – including two during the Wildcats’ fourth-quarter rally – and added two assists to lead the OJR attack in his final game for the Wildcats.

Before the game, OJR (5-11, 5-4 PAC) honored 11 seniors plus their two student managers for their Wildcat careers, which featured three PAC championship game appearances and a victory in Districts in 2016.

Ironically, it was a couple of those Wildcats’ PAC playoff victories that provided a little extra fuel for victorious Perk Valley on Thursday night.

“I’ve been a victim of three losses in the PAC playoffs my first three years,” said Fehr, “and it’s a pretty great feeling to break that trend in my senior year.”

Garnet Valley, Radnor headed for showdown
Radnor advances to next round in district tournament