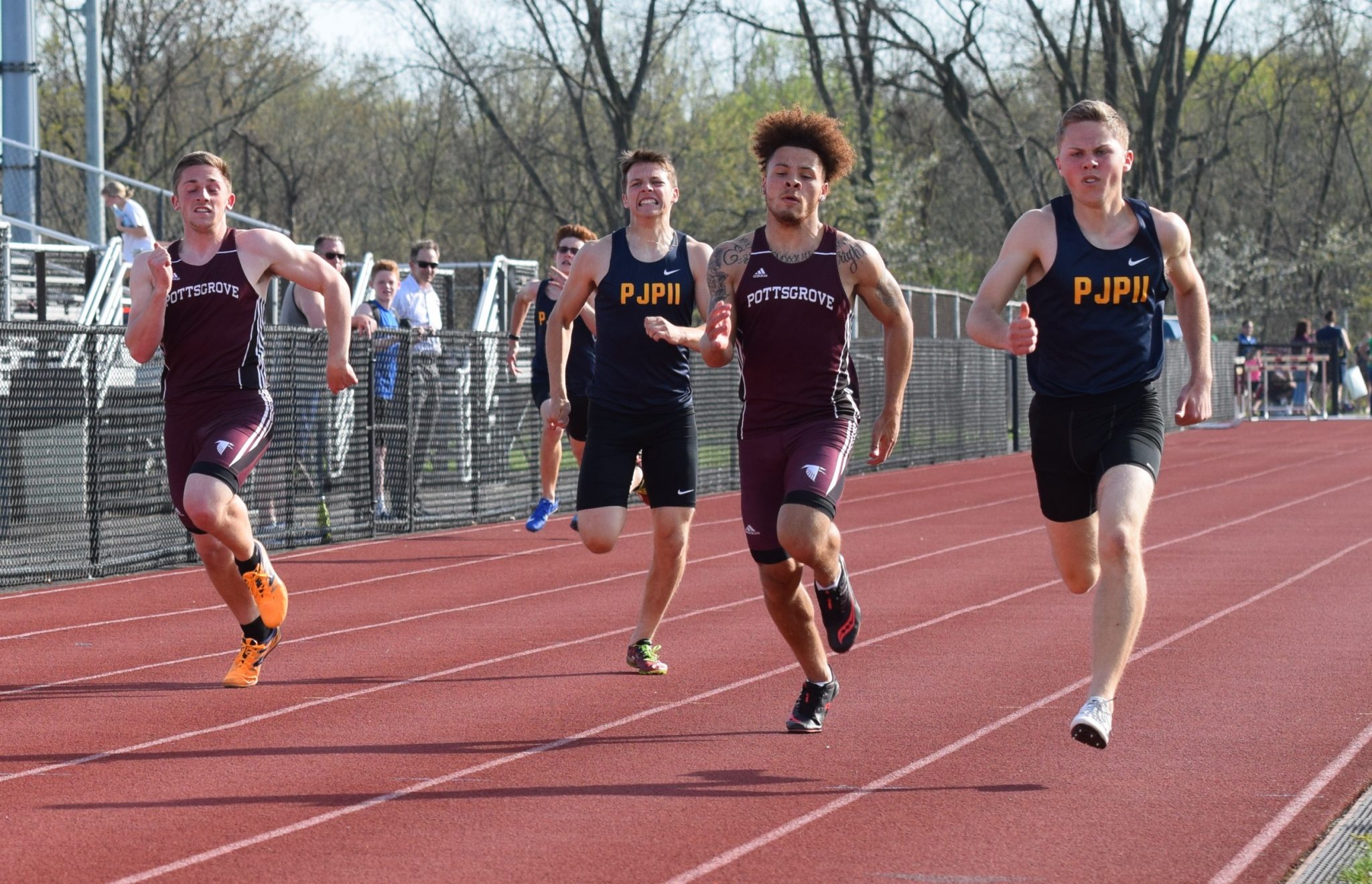 LOWER POTTSGROVE >> The seniors were celebrated for their contributions to Pottsgrove’s track programs Wednesday.

But everyone on the teams — soon-to-be graduates and underclassmen alike, as well as coaches — got to celebrate a banner day when the teams hosted Pope John Paul II at Pottsgrove Stadium.
Winning their final home meets of the season enabled Pottsgrove to complete perfect runs through the Pioneer Athletic Conference’s Frontier Division. The results were both one-sided: The Pottsgrove boys won 102-47, the Falcon girls 109-40.

“That was one of our goals this season, to win the division and go undefeated,” Pottsgrove head coach Larry Rechtin said following the teams’ celebration of the dual championships. “I felt we could be competitive.”

Both Falcon squads were particularly competitive in the field, with overwhelming edges in the score. The boys claimed 53 of 63 points behind the individual efforts of Mike Ziegler and Justin Adams; the girls, in turn, had a 47-16 spread in the throwing and jumping events.

That effectively offset the Golden Panthers’ showings on the track — showings that featured 1-2-3 finishes for the boys in the 800, and the girls in the 200.

“We’ve been dealing with this fever that’s been going around,” PJP head coach Lisa Cagliola said. “We’ve also had the typical end-of-season injuries. It will be nice to have a couple days’ rest.”

Among the Pottsgrove seniors reveling in their regular-season accomplishments was Ashon Calhoun. The sprints competitor — he runs the 100, 200 and 4×100 relay for the Falcons — is back after missing time with a back injury … and is happy to be so.

Calhoun marked his final run on his home track by placing second to teammate Isaiah Taylor in the 100, their finishes (11.0 and 11.1) very close. He also ran the anchor leg of Pottsgrove’s winning 4×100 relay, a 46.9 clocking the combined efforts of Rayshawn Allen, Taylor and Avery Grant.

“This means a lot,” Calhoun said of the unbeaten division run. “The team’s worked hard. We went into the season confident, not cocky. We knew we had the mentality to win.”

“We had to overcome injuries all season,” Rechtin said. “It was enough that we were never completely strong. Today, we got everyone back.”

On the track, Grant ran legs of the Falcons’ winning relays. Along with the 4×100, he teamed up with Simon Keen, LaRee Hills and Jay Sisko to run a first-place time of 3:36.5.

“Our boys team is balanced,” Rechtin said. “We have good jumpers, throwers and hurdlers. And we hold our own on the track.”

“Our boys distance team is extremely strong, and young,” Cagliola said. “We’re looking for them to take us into the future. Our freshman female sprinters, like Heather (Lesinski), have us looking good heading into the future.”

The immediate future for both teams will be heading to West Chester Friday for the Henderson Invitational, toward the goal of getting a number of their athletes district qualifying times and distances. Next week, PJP will serve as host for the PAC Championship Meet Friday and Saturday.

“The kids are beyond excited,” Cagliola said. “It’s going to be so much fun. We’re looking forward to hosting it … we don’t have to ride a bus. Being that excited helps the adrenaline.”

NOTES >> The Pottsgrove boys went 1-2-3 in the 300 intermediate hurdles, the 100, the three jumps and the discus. They also took the two scoring plces in the pole vault. … The PJP boys pulled a sweep of the 1,600 and 800. … The Pottsgrove girls dominated the 800, triple jump and discus.