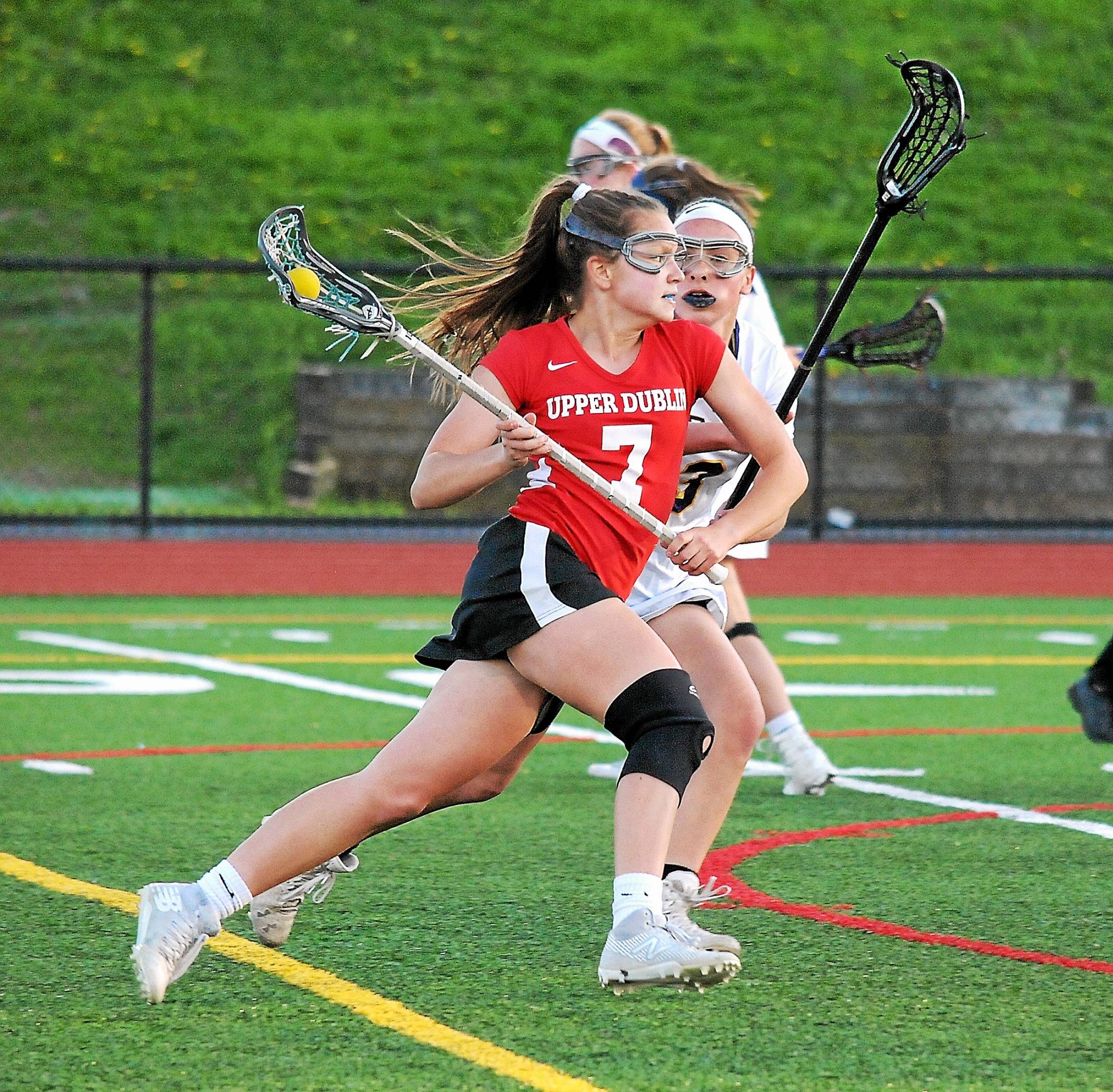 After three straight losses, including a one-sided setback to Radnor on Saturday, the Cardinals knew they were capable of better. They had a chance to prove it Monday night, but it would require taking care of a good Upper Moreland team under the lights on its new turf field.

Upper Dublin did a lot of what it hadn’t in its last three games and dominated a pivotal stretch of the game on its way to a 13-7 win Monday.

“We’ve been harping all season on a next play mentality, staying strong and not dwelling on past mistakes,” UD senior midfielder Caroline Wall said. “Coming off a couple hard losses was tough as a team, but we had to find a way to keep fighting through because we still have so much potential as a team so we’re looking forward to staying strong as a team.”

Six different players scored for the Cardinals (9-4, 3-2 SOL American), led by hat tricks from Mack Moore and Julia Reardon while the UD defense kept the Golden Bears off the scoreboard for a nearly 25-minute span. After a fairly even start that saw the game tied 3-3 after UM’s Emma Meakim scored with 11:21 left in the first half, UD took off.

The Cardinals’ run, which saw them score six straight goals to end the half and the first three of the second half, was carried by several factors. Upper Dublin won draw controls, the defense was able to force some turnovers and perhaps most importantly, the Cardinals were getting to a lot of ground balls.

“It’s a matter of intensity,” UD coach Dee Cross said. “We told them you have to go for everything. Sometimes, they back off because they’re afraid they’re going to lose possession rather than going after it and making the ground ball happen. It’s intensity, maturity and experience and I think tonight helped us get back on track.”

Just like there was no one standout offensively, it was a team effort defensively. Wall and senior midfielder Lindsey Schreiber each caused three turnovers while backs Lydia Casey, Maizie Hanson and Michelle Wright each forced a turnover.

Schreiber was also particularly strong on the ground ball front, scooping up six off the turf while Wall had three and junior Becky Browndorf had two. UD’s most experienced group is its midfield and it showed on Monday with the midfielders playing tough on both ends and registering a lot of plays that fueled the 9-0 run.

“We were really messy and not playing as a team at all the last few games,” Moore, who added two assists to her three goals, said. “We fell apart, it was all mental.”

“I think it came down to working as a team, it’s something we struggled with the past few games,” Wall added. “We needed to be meshing and communicating more and we were really able to pick it up in this game. Our warm-up was strong, so we came out strong and didn’t make the same mistakes we had the last few games right off the bat.”

Upper Moreland (9-4, 3-3) came into Monday’s contest in a bit of a lull itself. Between losing their seniors on their class trip, games against Plymouth Whitemarsh and Souderton preceding Upper Dublin and the prom this past weekend, the Bears haven’t quite been on the same page for a couple weeks.

Whenever it seemed like they were getting close to a goal that would have stemmed the Cardinals’ run, Upper Dublin came up with a turnover or ground ball to keep momentum on its side. Still, down 12-3 with 11 minutes left, UM kept fighting.

The Bears got a little spark out of it, scoring four straight goals to get within 12-6 with 4:56 to go.

“We were having trouble with our transition and a couple other things we normally do well,” Bears coach Kim Frantz said. “Upper Dublin did a nice job putting on the pressure and we struggled with it a little bit, especially on things we normally don’t struggle on. Once we finally scored after having a lull, it helped them out. My girls played with heart until the last minute and I can’t ask for more.”

Upper Moreland has Abington and Wissahickon left on the schedule this week as they start to prepare for the Class 2A District 1 playoffs.

“We’re playing tough teams, I can’t take that away from who we’re playing and some things just didn’t go our way tonight,” Frantz said. “We just didn’t do the fundamentals right and that hurts.”

Julia Reardon with 34.1 left in half for 8-3 UD lead. Cardinals have last five goals pic.twitter.com/GQNizu8MyB

Reardon scored a natural hat-trick for Upper Dublin, getting two goals in the last 34 seconds of the first half and the first tally after halftime, giving UD a 10-3 lead. Her second goal came via a great pass from Moore, who lost the ball going into the eight meter semicircle, managed to recover it and hit a trailing Reardon for the marker.

“We know Upper Moreland always comes out strong and they pick up momentum easily,” Moore said. “We knew if they scored a couple goals, we were going to have to work extra hard to get the game back on our side.”

Wall felt another key aspect to Monday’s win was the UD players not getting in their own heads and down on themselves after mistakes, something that really hurt them during the three-game losing skid.

“Our confidence was shot after those past couple games,” Wall said. “It was huge for us to come out here, in a night game on their new turf and come out this strong.”

“We needed this one,” Cross said. “Upper Moreland is aggressive, they always play us tough so we knew the type of game we were going to get. We held our composure, we cleaned things up and though we still had a couple sloppy moments, it didn’t define the game for us.”