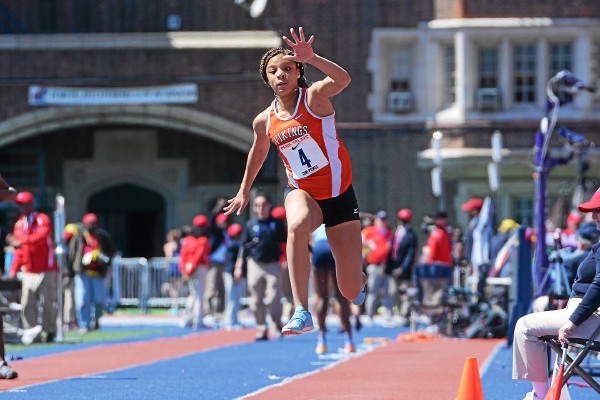 PHILADELPHIA >> She’s still not where she wants to be — in terms of distance — this spring.

But Christina Warren pronounced herself pleased with her effort Thursday at the Penn Relays. Warren was the highlight of the local contingent out at the University of Pennsylvania’s Franklin Field for the 2018 installment of this track carnival, placing fourth in the high-school girls triple jump.

Boyertown’s Eliana Rightmyer in the 4×400 relay at the Penn Relays. (Mikey Reeves – For Digital First Media)

Warren’s best jump of 41 feet, one-half inch earned her fourth place. The Perkiomen Valley junior was the highest finisher among American contestants, headed by a trio of Jamaicans led by Lotavia Brown (43-2 1/4) and Ackelia Smith (42-11 3/4) of Edwin Allen school in Clarendon.

“It’s farther than I’ve been jumping,” Warren, The Mercury’s 2017 Female Track Athlete of the Year, said. “I was actually aiming for 13 meters, which is 1-1/2 feet away. But I’m on track where I want to be. It was a two-foot improvement.”

Warren was headed for third place but Keneva Headley, from Holmwood Tech in Christiana, posted a 41-7 3/4. In turn, she topped Mahogany Jenkins of Watchung Hills in Warren, N.J., who was fifth at 40-6.

“The weather was nice,” Warren noted. “The wind game me enough break so I didn’t have to alter my steps. It was swirling … sometimes you had a head wind, sometimes a tail wind.”

Christina’s winning jump came around the fourth of her six attempts.

With the college women and high-school girls heading Thursday’s schedule, Pioneer Athletic Conference schools entered teams in the 4×400 relay. Several had entries in the 4×100, finishing high in their various heats.

In the fifth heat of Race 109, Methacton’s foursome of Juliana Keenan, Amy Domenick, Kate Evans and Lauren Prusacki ran a 48.92. In the fourth heat of Race 110, Pottsgrove’s team of Janiya Jones, Hailey Strain, Kennedy White and Miazzah Rose clocked a 50.75; and in the seventh heat of the same race, OJR’s Carly Resnick, Shaylan Cobb, Avery Sapp, Corrin Ferrizzi covered the race in 52.05.

Finishing in order from sixth to 11th were Perkiomen Valley, Pottsgrove, Norristown, Spring-Ford, Pope John Paul II and Boyertown. Pottstown came in 13th, following Academy Park but ahead of Chichester.