All-Delco Wrestling: Humble Catka should get used to the limelight 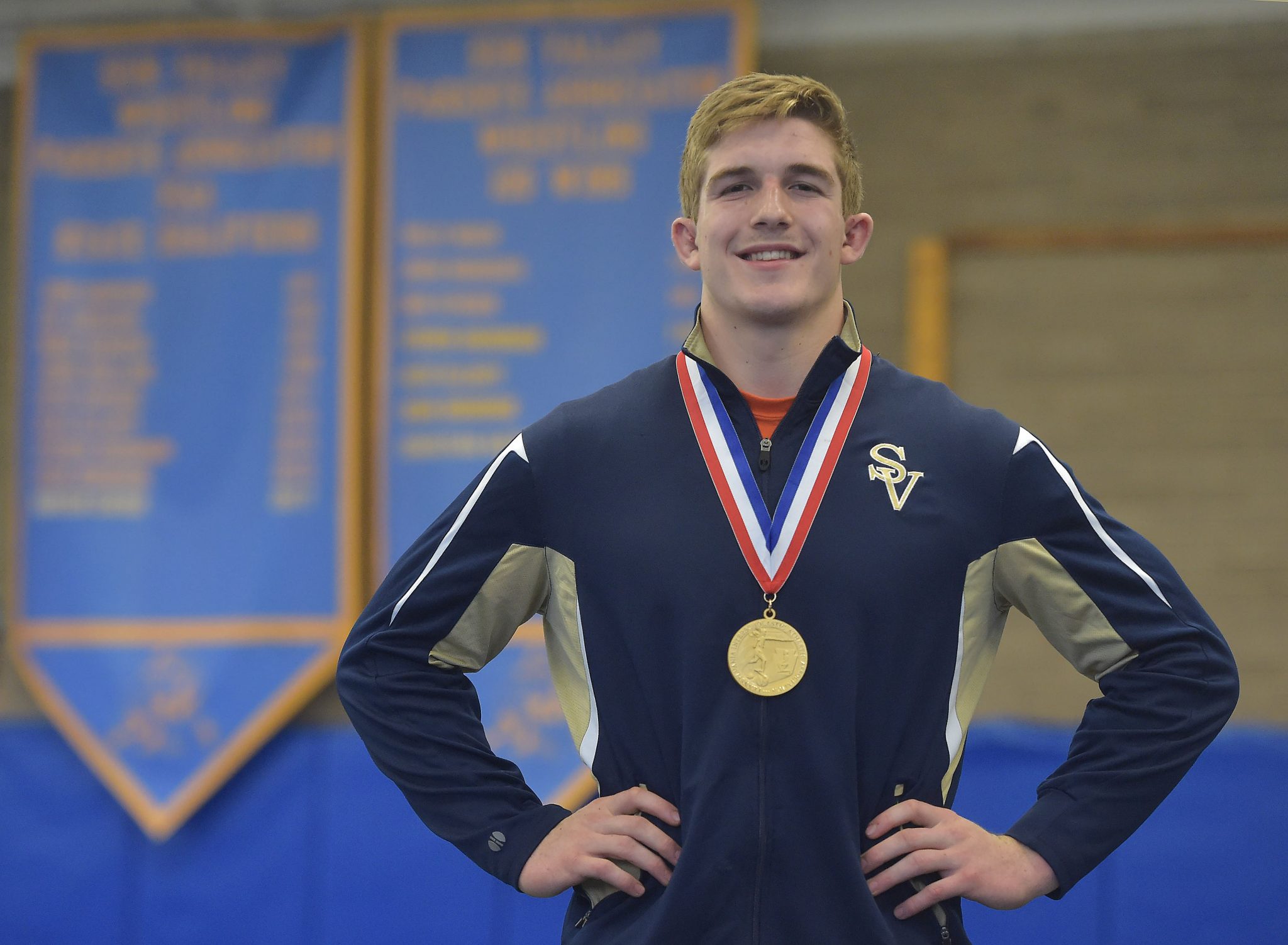 Sun Valley state champion Hunter Catka, the Daily Times wrestlier of the year, is known around school as a ‘mild-mannered kid’ according to Vanguards coach Tom Ellis.

ASTON >> During the season, Hunter Catka and the Sun Valley High wrestling team made a Christmas visit to Fair Acres, the Delaware County nursing home.

The team rallied in support of the Tim Tebow Foundation prom for youths with special needs at The Christian Academy.

Natural as those appearances were, Catka wasn’t nearly as comfortable posing individually for photos and signing autographs recently at an Aston AA youth wrestling tournament. He’d better get used to it.

The 16-year-old sophomore is the reining PIAA Class 3A state wrestling champion at 220 pounds, and the Delaware County wrestler of the year.

Catka, Orr, Stocku and Poulos are repeat selections. Poulos earned first-team honors two years ago as a sophomore and was injured most of his junior season. The All-Delco team is selected after consultation with county coaches.

With a couple more shots at stardom, Catka has a chance to savage the wrestling record books, and maybe even the budgets of the police and fire companies escorting him back to town with the medals.

It only was a little more than a month ago when Catka defeated Parker McClellan of Altoona, 7-5, to win the state 220-pound title at the Giant Center in Hershey. The next afternoon, he was greeted by a crowd of youths and parents the moment he got off Rescue 17 at the Aston Community Center.

“Everybody just gathered around the fire truck and were clapping,” Catka recalled. “We took a big picture and then I went to a table where kids wanted my autograph and pictures. It was kind of weird, honestly, because I’ve never really experienced that. But it was cool, the moment.”

Catka, who stands a shade under 6-3, is as cool as a wrestler can be. The product of Brookhaven began wrestling in sixth grade, which by conventional standards, is late for a grappler. Soccer and football, the latter as a defensive end, didn’t agree with Catka. He felt like he just didn’t fit.

“A lot of people don’t know that this was just his fifth season of wrestling,” Vanguards wrestling coach Tom Ellis said. “A lot of wrestlers start in elementary school, as young as 5, 6. Ron Frank, who used to coach Penncrest, is a good family friend. The Frank family and the Catka family go to the same church. And Ron Frank convinced Hunter’s dad, Sean, to sign him up for wrestling. And the rest is history.”

It was the first gold ever for a Sun Valley wrestler. Catka is the only Delco underclassman to win a state title. In two seasons he’s 75-8 with 39

This season Catka was 41-1 with 29 wins by fall. In the state tournament he avenged his only loss of the season, beating Selinsgrove freshman Nate Schon, 6-1. With two years to grow, Catka could be the only Delco wrestler to win multiple titles. Try blocking that out before you train.

“Yeah, I’m always kind of thinking ahead,” Catka said. “But I think I need to focus on what I’m doing this summer and focus on my training this year, and not next year. I’m jumping right into freestyle practice. Hopefully I’ll qualify for the tournament in Fargo. I’m hoping to do really well there and maybe go to like the Pan Am and the U.W.W. tournament in Guatemala. That would be fun.”

Ellis could talk forever about Catka, from the unending work ethic and example he sets as a competitor to the Christian values that define him.
Ellis and Greg Hagel, Catka’s club coach, are amazed how seamlessly Catka applies techniques they teach.

If Sun Valley parents are looking for an athlete their kids can look up to, it’s the Big Cat. And not simply because he’s enjoyed moving on from the cell phone he dropped, and broke, before the tournament season.

Catka’s cell phone didn’t blow up with texts after he won his state title. It shattered after it fell while he got in a car.

“I think that was kind of a blessing, honestly,” Catka said. “It just took all the distractions away and I was just focused on wrestling and my goals.”

From 16-year-old state champ to shining example, Catka is growing up in a hurry.

“He’s not the type of kid that wants the limelight,” Ellis said. “That’s not what he’s about. He’s a mild-mannered kid. He’s the kid who shows up for work with the lunch box. And the best thing about it all is the fact that most of these parents, they enjoy the fact that their kids are looking up to a good role model like Hunter. Christian, great family, not conceited. He’s worried about other people more than himself.”

The Vanguards’ wrestling team has two Catkas, including Hunter’s younger brother, Ryan, who this past season went 26-10, and finished fifth in the District 1 Class 3A championships at 170 pounds.

Hunter Catka looks up to seniors Avery Frank (29-13, sixth in region), the 160-pounder, and Nick Bailey (33-6) at 182, who also cheered him on at states. In a team sort of way, the group helped Catka clear his biggest hurdle in the state semis.

Catka was in trouble against Ian Edenfield, the Laurel Highlands veteran maneuvering him to a point where one referee banged his palm on the mat to signal the pin. While Edenfield leaped into the air, the other official ruled Catka was outside the circle boundary.

Catka rallied for a 6-5 victory.

Contrary to popular opinion, prayerful folks like Hunter Catka don’t ask their creator to give them something, say a state title.

“Honestly, I just kind of thank the Lord for everything he’s given me, for the countless blessings and that I’m healthy throughout the tournament and just help me to do my best,” Catka said.

And when you get a break, like in a semifinal?

“I guess God’s plan wasn’t for it to end there.”