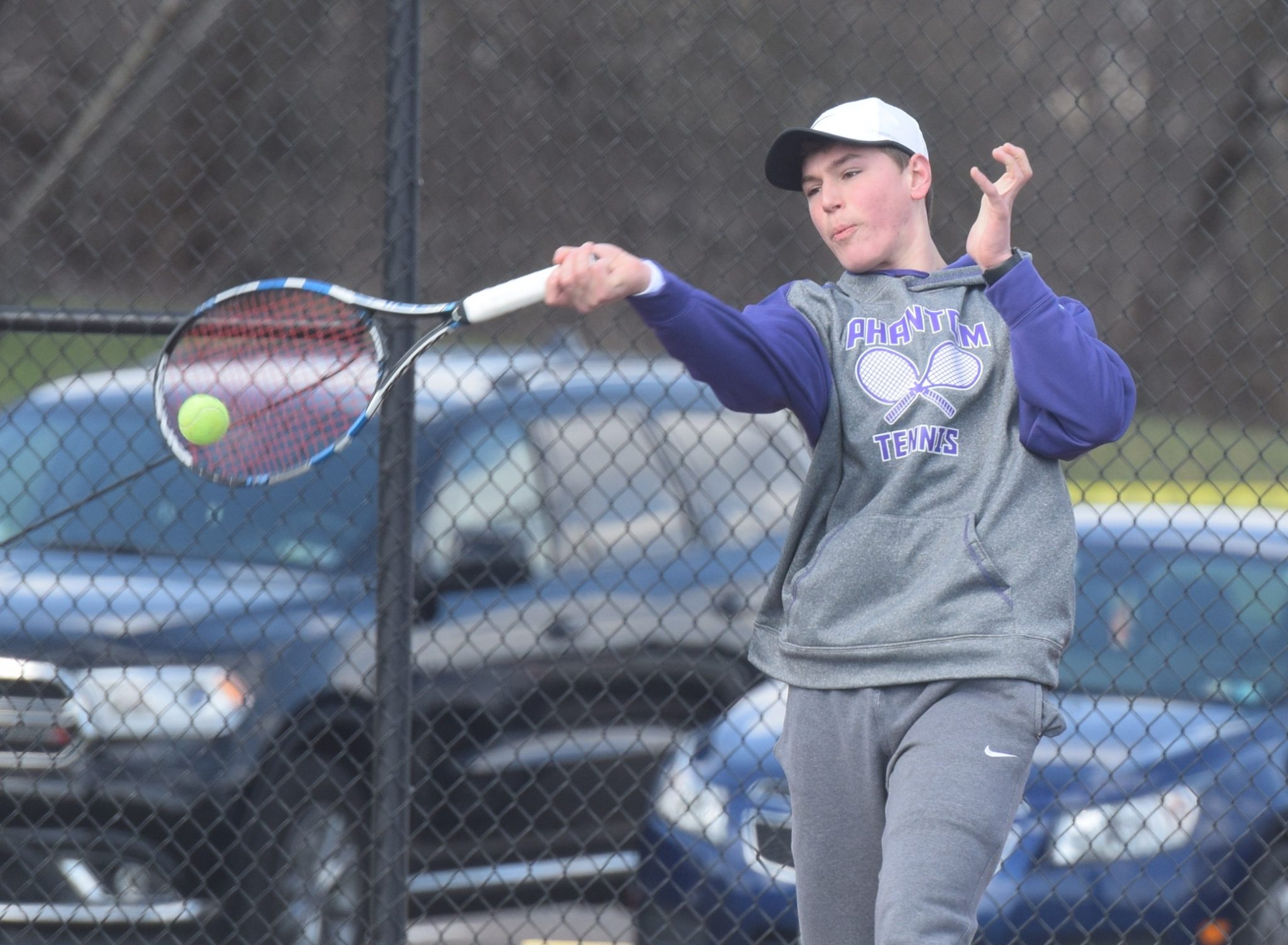 ROYERSFORD >> Andy Holmberg was in the dark.

Phoenixville’s No. 3 singles player saw all his teammates lined around his court, felt their cheers and energy in the third set of his match with Spring-Ford’s Adit Jain Thursday afternoon at Spring-Ford. The rest of the Phantoms weren’t just there because it was the last match on court though.

“I didn’t really know what the score of the match was, whether we had already won or already lost. I had no idea,” said Holmberg, a junior. “I came off the court in between the second and third sets and no one would tell me what the score was because I think they didn’t want to make me nervous.”

With the match tied 3-3 and only No. 3 singles yet to finish, Holmberg more than held his nerve and completed a crucial rally to defeat Jain, 2-6, 7-6, 6-2, and give Phoenixville a 4-3 victory over Spring-Ford in a pivotal Pioneer Athletic Conference boys tennis match.

“I just went out there and tried to get every ball back and it worked out,” Holmberg said. “That was awesome. I’ve never played a match like that.”

“My teammates (really lifted me in the third set). They were all around the court … I guess I should have figured the match was on the line,” Holmberg laughed. “I worked off their energy.”

Senior Graham Light was a straight-set winner at No. 1 singles over sophomore Malchu Pascual, 6-3, 6-4, while Phoenixville got doubles wins from Nick Delucia and Dany Soh at No. 2 doubles and Eric Nascari and James Peterson at No. 3 doubles.

Spring-Ford’s wins came from Nolan Schweitzer at No. 2 singles, 5-7, 6-2, 6-1 over JT Stevens, Nick Moore and Ben D’Arcangelo at No. 1 doubles and Chris Lambert and Sidd Chavan at No. 4 doubles, who leveled the match at 3-3 to set the stage at No. 3 singles.

Light, the only semifinalist from last year’s Pioneer Athletic Conference singles tournament back in 2018, couldn’t have picked a better time to return to the lineup while nursing a hamstring injury.

“I haven’t played the last two weeks, but I’ve been waiting for this match. Malchu is a great player and a great guy,” Light said. “We played last year and I lost to him in three sets. It was a good test to play him again.”

Light worked his way into the match on a poor day for tennis with high winds and temperatures in the 40s, which deadens the bounce of the ball, as he got stronger into the match as the more consistent of the two with his groundstrokes and using his slice backhand to devastating effect.

“At the beginning of the match, when I served (the hamstring) was really killing me,” he said. “I started off hitting a light serve, not too hard, keeping the ball in play. As the match went on I just kept on serving harder and harder and it felt fine so I just kept it going.”

As the highest-finishing returning player, Light is one of the top hopefuls to win the PAC singles championship in 2018.

“When you think about it, I could be the guy that wins the PAC tournament,” Light said. “When I was in ninth grade playing doubles, I didn’t think that could ever be. It was like, ‘Wow, these kids like Patrick, Malchu’s older brother, I’m never going to win.’ It’s crazy to see that I could actually win.”

Phoenixville (3-0) beating Spring-Ford (2-1) should go far in determining the PAC team championship after the Rams edged reigning champion Methacton 4-3 on March 29. Phoenixville is scheduled to visit Methacton Friday, though rain is in the forecast.

“This was ‘the’ match,” Holmberg said. “Methacton won the PAC last year and Spring-Ford beat Methacton (on March 29). We knew if we want to win the PAC this year we had to beat this team. And we got the job done.”

“We have a really strong core of seniors who are great at bringing the team together,” Light said. “We’re having a good time.”