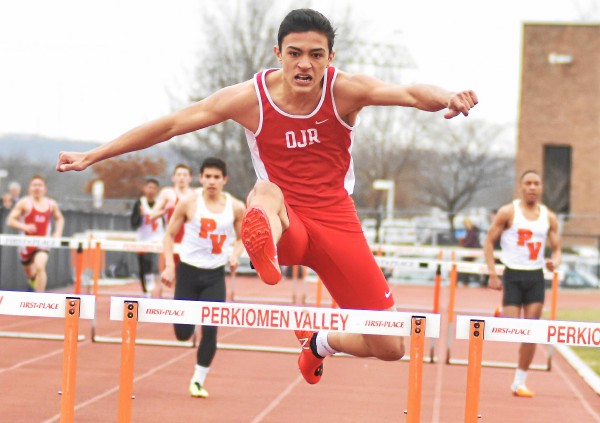 GRATERFORD >> It was, quite arguably, the best kickoff for the Pioneer Athletic Conference’s 2018 dual-meet season.

Owen J. Roberts and Perkiomen Valley, whose girls dueled each other with gusto last spring and again during cross-country season, provided the PAC’s lid-lifter Tuesday. It proved to be a thriller on both sides, the Roberts boys and Viking girls winning their meets.

The OJR boys, with standout senior Liam Conway figuring in on three first-place finishes, topped PV 77-73. The girls’ meet saw a similar score, though the Vikes won with Christina Warren a three-event winner … all on a day whose weather conditions were more akin to winter than a spring season already a week old.

“We’re all looking forward to warmer weather,” Conway said. “But it was a solid finish for us.”

The closest of the final scores notwithstanding, the meets didn’t come down to the final event on the boys’ side. OJR had compiled enough points following the 3,200 run to make Perk Valley’s victory in the 4×400 relay finale do little more than tighten the final spread.

“It’s a tough start,” Roberts head coach Tim Marcoe said of the uncomfortable weather, “but I was happy with how everybody competed. The kids worked hard.”

Perk Valley got a big individual effort from Christina Warren. The Mercury’s 2017 Athlete of the Year — a state champion in the Class AAA triple jump, fourth in the 100 hurdles — won both those events and the long jump, running a 14.63 in the hurdles and making respective 36-11 and 17-1 leaps in the triple and long jumps.

The Viking girls showed considerable might in the field, outscoring Roberts by a 40-23 margin. Beyond Warren, they got firsts from Kylie McDonnell in the discus (92-4), Najilah Downing in the shot put (31-9 1/2), Eva Rosales in the javelin (95-4) and Anna Sokolowski in the pole vault (8-6).

“We had a good day in the field, with the jumps and throws,” PV head coach Joe Petsko said. “We’re looking for a big year from them.

“I was glad to see McDonnell do what she did. Najilah got off to a good start, Eva in the javelin was big, and Anna tied the school record in the pole vault.”

“The first (meet) is always tough because you’re not sure what you have,” Petsko said. “It’s a feeling-out process.

“We had good performances. I was happy with how our kids performed. What matters is how they do going forward.”

Conway wasn’t Owen J.’s only male athlete to figure in multiple wins. Scott Honicker swept the hurdling events with respective times of 40.74 and 15.14 in the 110 highs and 300 intermediates.

“Our girls want to live up to the last two years,” Marcoe said, a reference to their 5-0 sweep of the Liberty Division last spring and an 8-1 record in the PAC the year before.

NOTES >> Conway, sizing up this year’s OJR boys squad: “Scott, in the hurdles, is leading the way. We have a bunch of distance guys from cross country, and great throwers. There are a bunch of events we feel we can place high” … Both teams, like other programs in the region, have had to contend with the recent spate of snowy, cold weather adversely impacting their practice schedules. “We’ve been outside, but not on the track,“ Marcoe said. “Last week, we were out only on Monday. It’s tough on the field events; the throwers and jumpers are behind.” … “This has to be one of the worst springs, with temperatures in the 30s and snow,” Petsko added. “But the kids have to move forward, find ways to get better.”