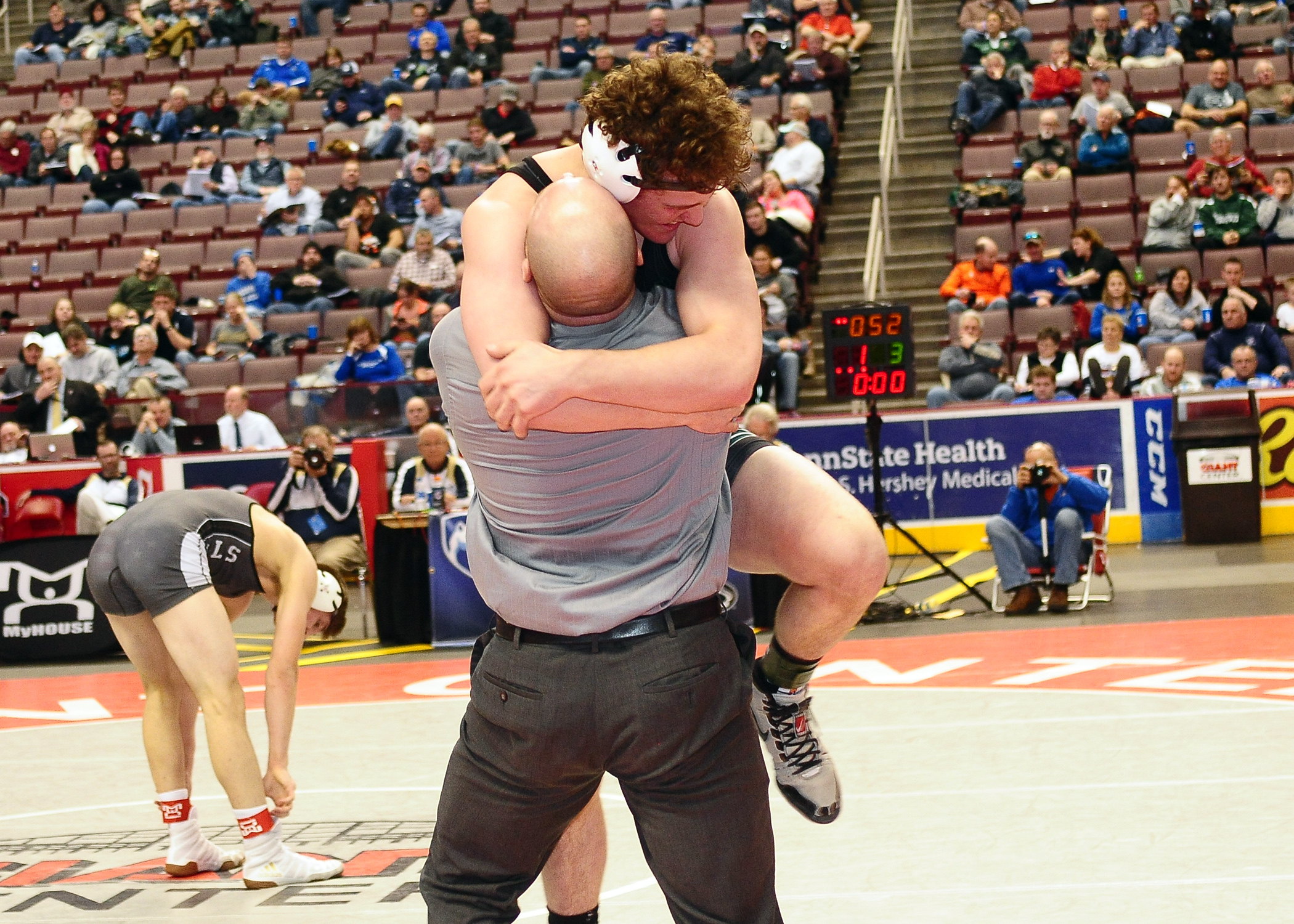 HERSHEY >> And just like that, the number of Pennridge state wrestling champions doubled.

It’s been 13 years since Dan Goetter became the first Pennridge wrestler to win a state championship. The Rams have seen a few come close over that span, but no one quite got over the hump until Saturday night when Josh Stillings claimed the gold at 182-pounds with a 3-1 win over Tim Wallace of Albert Gallatin.

Pennridge’s Josh Stillings has his arms raised after his 3-1 decision over Albert Gallatin’s Tim Wallace in the 182 pound final at the PIAA Class AAA Wrestling Championships at the Giant Center in Hershey on Saturday, March 10, 2018. (Bill Rudick/For Digital First Media)

“This is just absolute bliss,” said Pennridge coach RP Norley. “Josh is such an inspiration to all the young kids in our program. He’s an absolutely amazing role model for the kids. He’s always had the goal of being a state champion and I just couldn’t be more excited to see him reach that goal.”

The match itself was the most tightly contested Stillings has had in months. Scoreless after one, Stillings took down to start the second. Though Wallace rode tough for a good chunk of the period, Stillings eventually wriggled free for an escape, then bumped the lead to 3-0 with a takedown.

“I knew he was good at setting the pace of his matches, so the first thing I wanted to do was make sure I put the match at my pace,” said Stillings. “I’m confident that I can take anyone down if I’m wrestling my match, and if I got one takedown, it was going to be enough to win.”

Stillings survived a scare late in the period. Locked in his trademark crab ride, Wallace began to squirm out, and had Stillings hanging on for dear life. Had he not hung on to the crab ride, the period may have ended with Stillings on his back and down on the scoreboard. But Stillings was just plain unfazed, and never lost control, and avoided a reversal call.

“That claw position is something I’ve been working on probably since freshman year,” said Stillings. “RP (Norley) and I work on that position a lot in practice, and I know I can ride pretty much anyone with it. I know it probably looked bad there, but I was honestly comfortable and knew I could hold it.”

Wallace managed an escape late in the third, but it was too little, too late, and Stillings held on for the victory.

While Norley won’t have Stillings, who will continue his academic and wrestling career at nearby Drexel, in the room on a daily basis any more, he knows that the first state champion of his coaching career will never stray too far from Pennridge wrestling

“Josh and I work really well together,” said Norley. “And I think he’s got coaching in his blood. The kids in our youth program really look up to him. He’s real, not just a guy they see wrestle on TV. I think we’ve rubbed off on each other and I think he’ll always have a hand in where this program goes, whenever he can find a way to get back in the room”

NOTES >> Several other area wrestlers picked up medals Saturday night. Souderton’s Tyler Williams lost 3-0 to Nick Coy of Penn Trafford in the fifth place match to take sixth at 132. Pope John Paul II’s Ryan Vulakh rode a strong second period to a bronze medal at 145, picking up an escape, then taking down Northern York’s Micah Hoffman to his back for a pair of near fall to earn a 5-0 victory. North Penn’s Patrick O’Neill finished seventh at 160 with a pin in 1:14 over Southwestern’s Ethan Baney. William Tennent’s Yusuf Aladinov decked Mitchell Talbot of Central Dauphin for seventh at 195. Garrett Zobel of La Salle grabbed a fifth place medal at 285 with a 3-1 win in sudden victory overtime over Warwick’s Ryan Stewart. Ryan Cody wound up eighth at 285 after falling 1-0 to Roman Catholic’s Michael Leyland while Pope John Paul II’s Matt Vulakh finished eighth at 106 after a 6-1 loss to Altoona’s Matt Sarbo.