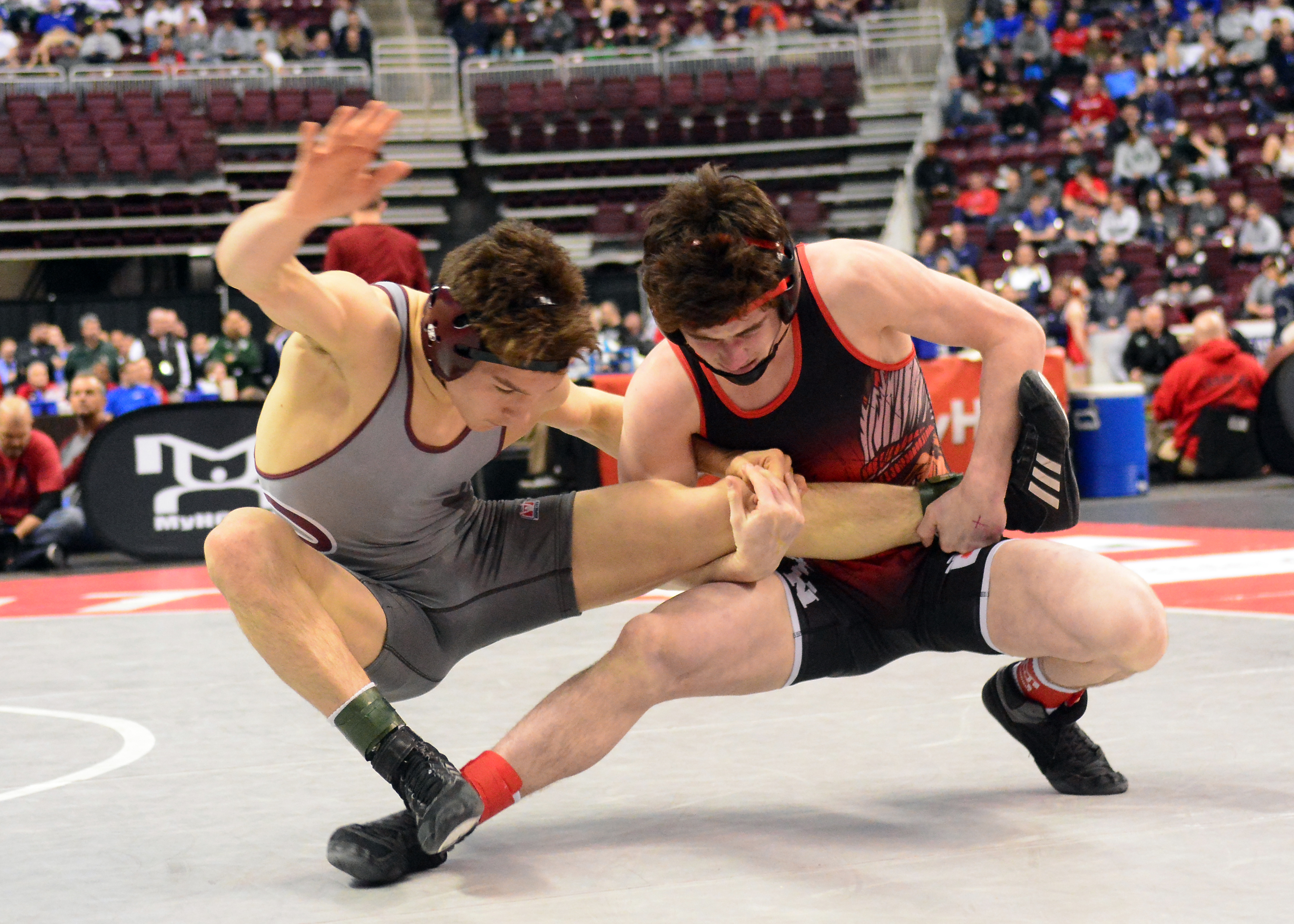 HERSHEY >> Fridays at the PIAA Wrestling Championships often provide the most compelling, emotional competition of the three-day tournament. At the end of the day, the athletes know whether they will be headed home with hardware, or to lick their wounds after coming up just short.

For Souderton’s Tyler Williams (132), Pope John Paul II’s Ryan Vulakh (145) and Pennridge’s Josh Stillings (182), the dream of a state championship is still alive, having earned victories to advance to the semi-finals.

Williams earned a measure of revenge in his quarterfinal win over Manheim Central’s Zack Zeamer, having lost by fall to the Baron wrestler at the Manheim Central Holiday Classic back in December. This time around, Williams wouldn’t allow himself to get in a postion to have his dream pulled out from under him, picking up a first period takedown, a reversal and a pair of near fall points to post a 6-1 win.

“I knew the moment I stepped on the mat with him today that it was going to be my match,” said Williams. “I got sloppy last time, and he took advantage. I wasn’t going to let that happen again. I’ve been waiting two years for the chance to get back here and get a medal. And I’m not done.”

Up next for Willams is Colton Camacho, a junior from Franklin Regional, and the Southwest regional champion.

Scoreless in the second, with Kiski Area’s Cam Connor, PJPII’s Ryan Vulakh locked up a Churella, and tilted Connor for three near fall points. Vulakh tacked on a third period escape to advance to the semi-finals.

“It’s nice to know I’m getting a medal, but there’s still work to be done,” said Vulakh. “The goal is always to be a state champion. You can never lose focus because everyone here can come up big at anytime.”

Up next for Vulakh is Nazareth’s Sammy Sasso, a defending state champion and Ohio State recruit.

Stillings has yet to be seriously challenged this post season, including in Friday’s 8-1 quarterfinal win over Cedar Cliff’s Donovan Ball. The Ram senior notched a pair of takedowns and a set of near fall en route to the easy win.

“Josh is wrestling very tough right now,” said Pennridge coach RP Norley. “In the past, Josh was content to just use his technique to sit on a lead. This year he wants to dominate. He goes out the with the mindset that he just wants to keep scoring and not just win, but dominate, picking up as many pins and bonus points as he can. And he’s doing that.”

Up next for Stillings is Josh Krieger from Shikellamy, the Northwest Region runner-up.

The third round of consolations is widely known as the “blood round.” Win that round, you live to wrestle another day, and you know you are on the medal stand. Lose, and your season is over.

PJPII’s Matt Vulakh (106) was in a scorless tie headed into the third period in his blood round match against Tunkannock’s David Evans when he broke the tie with a reversal, then turned Evans for two near fall points and a 4-0 win.

Down 1-0 and time running down in the third, North Penn’s O’Neill broke free for an escape to tie the match with Emmaus’ Caden Wright, then locked up a medal with a takedown with a mere four seconds on the clock.

Aladinov earned his place on the podium with a 7-5 victory over North Hills’ Nathan Mankey.

At 285, Cody and Bensalem’s Nick Cooper were in a tight battle before Cody earned the win with a takedown in the final thirty seconds. Though Copper escaped, Cody then held on for the 3-2 win.

Pennridge’s Evan Widing (145), and Souderton’s Bruno Stolfi each won consolation round matches Friday, but fell in the blood round to finish just shy of a medal. Hatboro-Horsham’s Nick Chapman and Methacton’s Kibwe McNair were also eliminated Friday.  LaSalle’s Garrett Zobel (285) was also a quarterfinalist, but dropped consecutive matches to be eliminated from medal contention.

In Class AA action, Nasir Pettus (220) of Bishop McDevitt, won his first bout of the day, but lost in the blood round to finish a win shy of a medal.  His McDevitt teammate, Tyrone Fowler, fell in his first match Friday morning and was also eliminated.