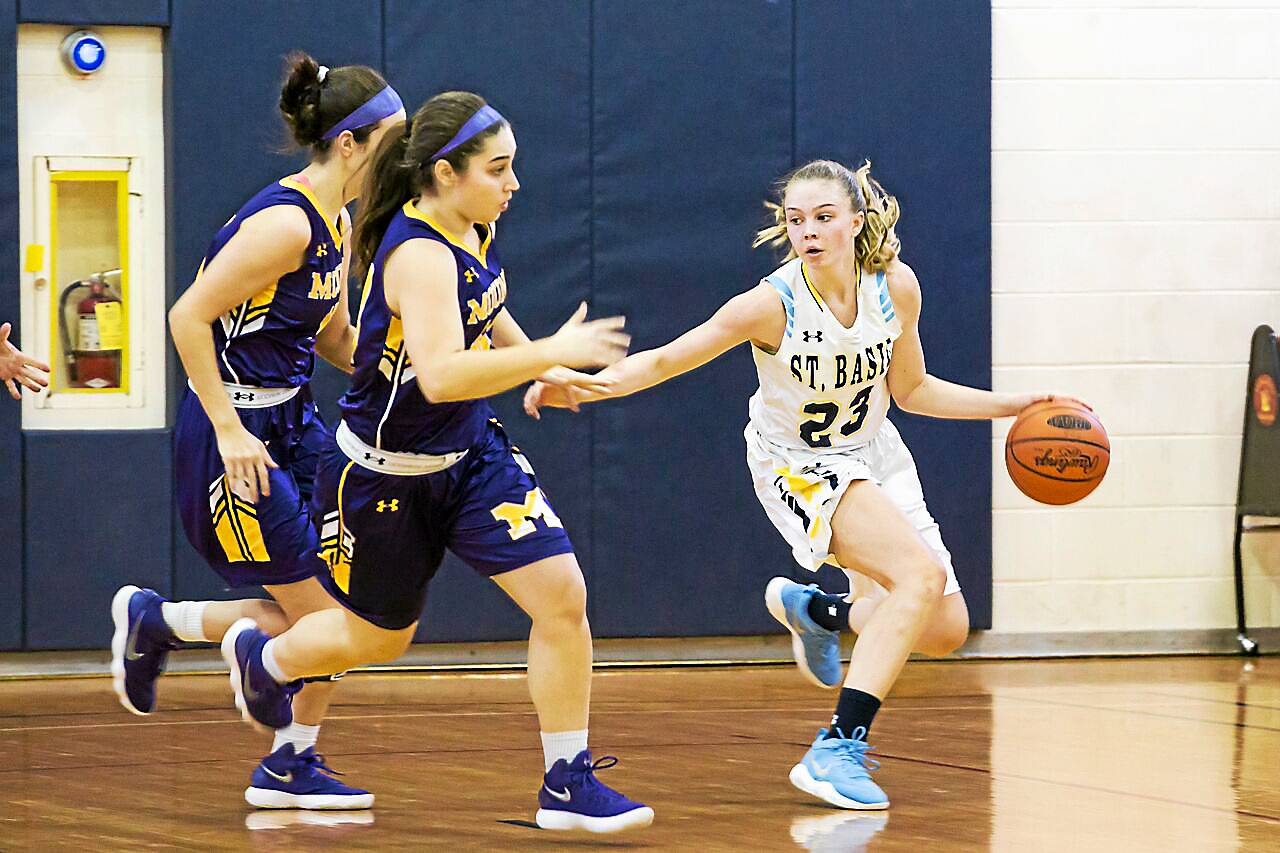 ABINGTON >> Rattle proof when it mattered most, Saint Basil Academy produced some fourth-quarter offensive gems Saturday, capping off a game dominated by defense and physicality.

Casey Remolde sank a crucial three, Jules Gura was quick with a putback off a missed foul shot, and Liz Deal found a way to make two left-handed layups.

“When it became close, we didn’t panic as much,” Remolde said of the Panthers’ rematch with Mount Saint Joseph. “Last game (a 43-39 loss to Mount), we really panicked when they applied ball pressure and we threw the ball away.

“And we weren’t able to score. This game, we were able to calm down, even when the game became closer. And really just play our game, as a team.”

Basil buckled down, finding its way to a 43-32 victory over the Magic in a Catholic Academies League contest.

Saint Basil’s Denae Carter (center) is barely able to move as she is sandwiched between the Mount Saint Joseph’s Kelly Rothenberg (left) and Grace Niekelski during their game on Saturday, Jan. 27, 2018. (Rachel Wisniewski/For Digital First Media)

“It feels really good, especially after losing to them earlier in the season,” said Remolde, who scored a game-high 13 points. “We really wanted to come back and play hard and get our revenge from the earlier game.

“We’ve had a couple big wins (in the second run through the league), got back at some teams that got us the first time around,” Remolde said of the Panthers, now 13-5 overall with a 10-2 league record. “So it feels good going towards the playoffs. Hopefully we can keep up what we’re doing.”

Said coach Terry Mancini of his team, which didn’t flinch when Mount got within a point in the fourth: “We’re playing a lot better than we did earlier in the season. It’s a good time to start peaking.”

A three by Lauren Vesey (team-high 10 points) sliced the margin to 25-24 to start the final quarter.

Basil responded first with its defense, as Denae Carter intercepted a pass underneath the hoop and took it all the way in for two. Then, with its offense, as the Panthers began to create open shots, with Remolde hitting a three and Deal — scoring all seven of her points in the fourth — hitting an outside jumper to make it 33-24.

Remolde hit a three in the second quarter and a big one in the fourth.

“(The three) felt good because they really weren’t dropping all game,” she said. “I was missing a lot of shots so it felt good to have a couple go in.

“(The offense) felt more relaxed. I think we all finally settled down. And we were able to just run our stuff and do what we do in practice.”

Gura had her clutch score off a rebound and Deal’s nifty layins pushed this one into the win column for Basil. The Panthers’ defense also did its part.

“Although we had a lot of fouls this game, it feels like we were able to contain them more and stop them from penetrating the lane,” Remolde said.

Defense dictating things, the only points of the period came off a drive down the lane by Deirdre Regan and a free throw by Grace Niekelski for the Magic, and a pair of foul shots by Basil’s Casey Remolde.

But Basil began to find its way in the second quarter.

Gura scored off a rebound, Carter drove to the basket and Cheryl Remolde hit a jumper, all part of a collective push that had the Panthers go ahead 8-3.

Lauren Vesey hit a three for Mount and both teams traded baskets until Basil closed out the half with an 8-2 run.

Saint Basil’s Kelly Grant (left) is hit by the Mount Saint Joseph’s Lauren Vesey as she dribbles the ball during their game on Saturday, Jan. 27, 2018. (Rachel Wisniewski/For Digital First Media)

The Panthers were able to start working the ball around and create open shots. Kelly Grant hit one to stretch the lead and Casey Remolde nailed a three, widening the gap to 17-9.

Carter set up Casey Remolde on a fast break, helping to make it 19-11 Basil at the intermission.

The Panthers led by four after the third quarter and then controlled the fourth.

“It was a good game. Both teams played really hard. It was a physical game obviously — 44 fouls total. Both teams battled,” Magic coach Jim Roynan said. “Basil hit some shots down the stretch. They weren’t shooting well at the beginning of the game and then they got hot in the third quarter.

“They hit two or three 3-pointers and got the separation they needed to milk the clock a little bit.”