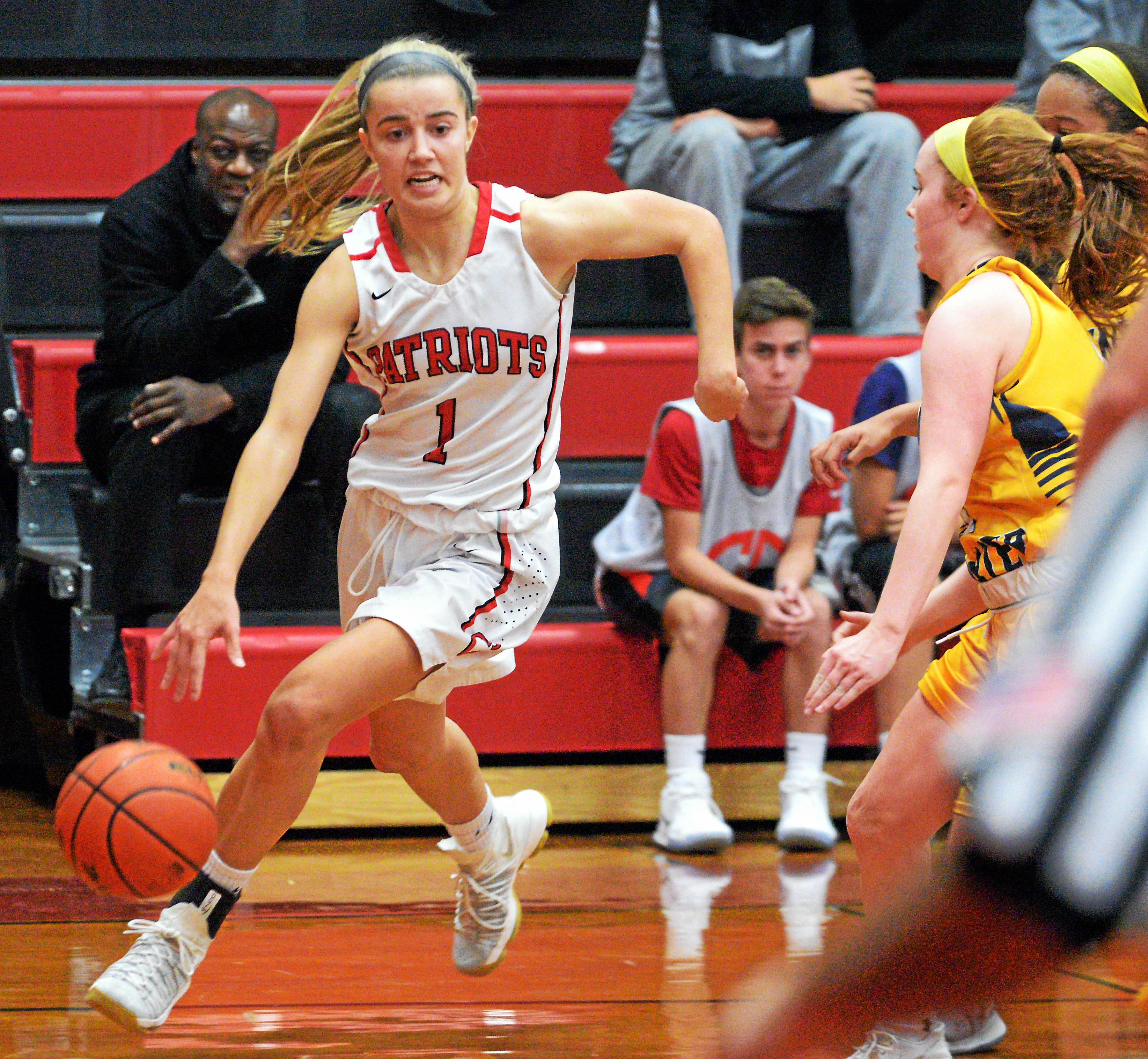 Naessens, a senior at Germantown Academy, is a 6-foot-1 power forward committed to Colgate. She puts opponents in a blender on the low block, hits outside jumpers, rebounds with power and generally makes life miserable for whoever she’s playing against. So it reasons it would take a special athlete and player to make Naessens wary.

But make no mistake, Naessens does not want to deal with teammate Elle Stauffer.

“It’s insane, I do not pick her up at practice,” Naessens said.

Stauffer, a 5-foot-11 sophomore with seemingly limitless athleticism and energy, was a catalyst as the Patriots rallied from a six-point deficit at the start of the fourth quarter to top Sanford (Del.) 61-56 as part of the Blue Star Basketball  Showcase at Jefferson University on Sunday. The forward was named game MVP, scoring 18 points with seven rebounds, two assists and three steals.

Naessens, who scored 14 points with seven rebounds, noted that Stauffer’s all-out approach isn’t just a gametime only act. Part of the reason the senior wants to stay away from guarding Stauffer at practice is the fact the sophomore brings it non-stop every single day.

“She used to run so fast that she would lose the ball behind her, she would run faster than the ball,” Naessens said. “I think she’s starting to get comfortable in her own skin so to speak and she’s just really been playing well.”

Stauffer saw plenty of time as a freshman, first early in the season when Naessens was battling some injuries then later in the year after Lilly Bolen went down with a knee injury. She played well, but was still trying to get the hang of playing as a post player.

The potential was obvious, especially with her terrific vertical leaping ability. In the fourth quarter Sunday, Stauffer legitimately jumped out of one of her own shoes going after an offensive rebound, which she of course grabbed.

Having to learn the ropes of life in the post, Stauffer turned to Naessens for help.

“She’s a great mentor and she’s just been amazing,” Stauffer said. “She’s taught me everything, she always talks to me. I don’t have that background as a post so she’s really helped me playing down there.”

Leave it to the underclassman to be more diplomatic.

“In practices, we bicker a lot, but that’s just going to make us better,” Naessens said. “Sometimes I have to tell her what to do and either she’ll listen or we’ll bicker and then talk about so when we come out for games, we know exactly what to do with each other.”

With time, Stauffer has gotten better at being decisive once she takes off from the ground whether she’s going up for a shot or going to pass out to an open teammate.

Naessens and Stauffer’s relationship is working very well in the post, but it also has roots in the pool. Both forwards played water polo this fall, with Stauffer serving as GA’s goalie and the physical nature of the sport has helped the sophomore on the basketball court.

Stauffer said there are some similarities between the two sports, citing necessity of hustle in both. The sophomore also said her position in water polo involves having to get vertical out of the water quickly, sort of like rebounding.

“It’s definitely boosted us with chemistry, because it’s not a very deep water polo team, there aren’t a lot of us,” Naessens said. “It helps a lot with how aggressive the sport is and I think it shows in how she plays.

“When she taps the ball, she has to sprint swim out to it and clear it so no else can get it and score and that’s the exact same way she plays basketball. Every time someone takes a shot, she’s always in there getting a rebound.”

Sunday’s win was tailor-made not only for Stauffer, but GA (11-3, 1-0 Inter-Ac) as a whole. Sanford is one of the top-ranked teams in all of Delaware, with lightning-quick guards and some knockdown shooters, so the game was a high-paced matchup from the opening tip.

Sanford’s shooting was the difference early, with the Delaware power taking a six-point lead at the half and holding the same advantage after three quarters. With senior Cat Polisano (seven assists) directing traffic in the fourth quarter, GA’s defense tightened up, the Patriots started winning rebound battles and shots started falling.

Sophomore Jay Haynes turned in another strong game of her own, scoring six points, including nine of the team’s 13 in the third quarter to keep GA from falling even further behind.

“When we play like that and play that fast, we really start to excel and use each other more,” Stauffer said. “We started playing defense a lot better, we saw the court more and were getting each other open and finding each other with better passes.”

GA opened the fourth on a 7-0 run, with Rachel Balzer burying a 3-pointer off an errant save by a Sanford player, Balzer hitting Stauffer for a layup and Naessens collecting an offensive rebound and scooping home a go-ahead basket. Stauffer put GA up four with 3:09 left, the latter two points coming after she was fouled on a put-back after jumping out of her shoe, then gave the Patriots the lead for good with a hoop that came with 1:01 to play.

The Patriots contested a pair of misses from Sanford and Haynes hit three of four at the line to ice out a satisfying come-from-behind win.

“At the end, we had a lot of quick passes, we ran the floor really well and we played a good transition game,” Naessens said. “In all the games we’ve played, that’s where we’ve thrived and especially Elle because she runs the court so well, and Jaye as well. Running the floor is what we do.”

If Naessens has her way, this won’t be the last season she shares the court with Stauffer as a teammate.

“I am going to miss her so much. I always tell her she has to come play in college with me,” the senior said laughing. “I’m going to make her play there. I’m going to tell the coaches there ‘recruit Elle.’”