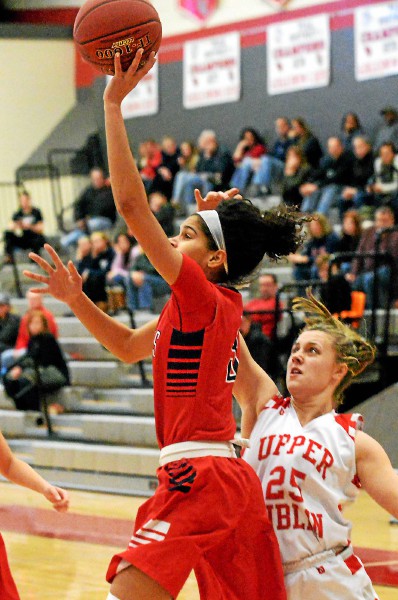 FORT WASHINGTON >> It is true that it takes a team to win a game, but Plymouth Whitemarsh’s Taylor O’Brien made a convincing case for the opposite opinion.
O’Brien scored 36 points with four rebounds and two steals in the Colonials 57-55 win against Upper Dublin in double overtime Saturday night at Upper Dublin High School.
She was unguardable for most of the night as she hit seven shots from beyond the arc and drove the lane on many an occasion.
O’Brien became the all-time leading scorer at Plymouth Whitemarsh with 1,624 points. The previous mark was 1,6215.
“I am just so proud of all my teammates and all the fans that came to support us and all the coaches,” O’Brien said. “Everyone did such a great job and everyone on the court had to be working together to get this done and we just played our hearts out.”
She did need her team as this game had nine ties and was a war of attrition.
O’Brien hit the first shot of the night and made her presence felt immediately and the Colonials led 10-7 after the first quarter.
The Cardinals seemed to try to get ahead with the three-pointer, but went 1-of-5 from beyond the arc and 7-of-26 for the game.
“We were expecting to get a lot of shots on the perimeter because we knew they would pay a lot of attention to Jackie Vargas down low,” UD coach Morgan Funsten said. “Most teams pay a lot of attention to Vargas which opens things up for us on the perimeter. I though we shot the ball a lot better in the second half and I thought it had a lot to do with staying confident. The girls did everything we asked them to do.”
O’Brien and company pulled out to a 16-9 lead in the second quarter, but the Cardinals stormed back to knot the game at 17.
Both teams hit big 3s, but it was O’Brien who hit a jumper with eight seconds left to take a 22-20 lead into the half.
Upper Dublin adjusted some things during the break to shut out O’Brien in the third quarter and go on a 14-5 run.
Vargas had four points at halftime, but finished the game with 24 points and 11 rebounds.
“I think my teammates made good passes to me and I got some rebounds and dunks,” Vargas said.
It didn’t take long for the Colonials to get going, but Nicole Kaiser, Jess Polin and Vargas were matching their intensity.
Vargas looked to being putting the finishing touches on the game at the foul line when O’Brien sprung into action.
O’Brien hit nine three-pointers in the game and four in the fourth quarter, but her last in regulation was her greatest.
As she dribbled frantically downcourt, she stopped outside three-point range to hurl a shot that landed in the net as time expired and tying the game at 43.
She said she had made baskets like that before to end a quarter or a half, but never at the end of a game.
“I did not (think it would go in),” O’Brien said. “I just threw it up on a hope and a prayer. Everyone was just there cheering and supporting, and I think that is what made it go in.”
The Cardinals scored a potential winning bucket with 32 seconds left, but it came down to Anna McTamney at the foul line with 12 seconds left.
Plymouth Whitemarsh had trouble from the stripe all night, but McTamney calmly drilled both baskets for an eventual second overtime.
Both teams exchanged 3s in the second overtime possibly setting the tone, but it was defense that would decide the game.
The Colonials collected three keys steals in the waning minutes to eventually come out on top.
“They were huge,” PW coach Dan Dougherty said. “I actually turned to my assistant coach and I told him we are playing with fire right now playing this team in man defense, but our other defenses weren’t working against them. We went zone and they stole the ball and when we were playing help defense on Vargas, they’re kids were stepping up and making shots, so we decided to just play straight man defense.”